Earlier this week, a statue of Ms. Campbell in her trademark skirt, blazer and “KC” broach was unveiled as the latest addition to the Prime Ministers Path, a unique sculpture park in bucolic Baden, in Southwestern Ontario’s Waterloo Region, that offers Canadians a chance to consider their past leaders as ordinary men and women representing an extraordinary country. It’s a welcome refuge of artistry, context and understanding far removed from the rigid animosity currently shown to historical figures and their physical representations elsewhere in Canada.

The idea of creating a collection of statues for each of Canada’s 22 past prime ministers was hatched in 2013 by local high-tech entrepreneur Dave Caputo and Jim Rodger, a retired high-school principal. “We wanted to create a public space where we could teach people about Canadian history using our leaders as bookmarks to the past,” Mr. Rodger says. But the path forward wasn’t always smooth.

Entirely funded by private donations, the initial plan was to locate all the statues in a large park in downtown Kitchener in time for Canada 150. But the city soured on the idea once an online survey revealed heated opposition to publicly displaying the “corrupt dead white men” who apparently comprise Canada’s past leadership.

A subsequent offer by Wilfrid Laurier University to host the statues on campus ran into similar complaints. According to one student group, the statues were “a perpetuation of a white hetero-male historical narrative of power;” the Board of Governors seemed to agree, declaring the statues an impediment to the school’s “overarching institutional goals of inclusivity and diversity.”

After several difficult years, the concept finally found a welcoming home on the grounds of Baden’s Castle Kilbride, an Italianate villa and national historic site that was once home to a local Liberal MP in the late 19th century. The first statue of Sir John A. Macdonald was installed in 2016 with subsequent additions, in no particular order, arriving at the rate of about two per year.

Mr. Rodger admits tiny Baden (population 5,000) is something of an “isolated setting” for such an important assemblage, but at least the neighbours don’t complain. Plus, it’s the perfect spot for a picnic.

The bronze statues – Mr. Rodger calls them sculptures in recognition of their artistic qualities – provide an opportunity to understand and humanize Canadian history. Life-sized and installed at ground level, these are leaders you can look in the eye.

“They aren’t up on plinths or larger than life,” Mr. Rodger advises. “We don’t want them to seem heroic, rather we want people to recognize them as real people. And to understand that anyone can be prime minister.”

Each statue includes hidden symbols and a subtext that encourages interaction and contemplation. Macdonald, for example, stands holding two chairs – a nod to his role bringing English and French Canada together in Confederation, while also beckoning visitors to sit and have their picture taken with Canada’s founding father.

Mr. Pearson’s entry offers a cleverly transgressive take on the very concept of statues. His empty brogues sit on a small plinth while the bow-tied prime minister himself rests off to the side in his socks. Titled Big shoes, it invites viewers to consider Mr. Pearson’s many accomplishments and ask themselves: “Could I fill his shoes?”

Ms. Campbell’s treatment is equally wry. The base of her statue consists of a section of walkway with a small bump beneath her − the sculptors’ nod to her brief four-month “blip” in office as Canada’s first female prime minister.

Creative, honest, funny, meaningful and utterly human. These are Canada’s prime ministers as they ought to be seen.

The Prime Ministers’ Path, on the grounds of Castle Kilbride in Baden, Ont., is 20 minutes from Kitchener/Waterloo and about an hour and a half west of Toronto. 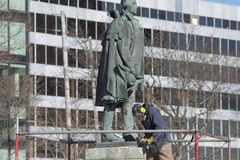