Lisa Gabriele is a Canadian TV producer and author. Her next novel, a modern retelling of Rebecca, called The Winters, will be published in the fall.

Who is she? Why does she remain silent? Now that she knows the truth about him, will she betray him?

These questions continue to swirl around U.S. President Donald Trump’s former communications director, Hope Hicks, after her quietly devastating exit from the White House last week. Watching the tight-lipped, enigmatic Ms. Hicks, after her stint in front of the special counsel looking into alleged Russian interference in the U.S. election, I was reminded of the unnamed narrator of the novel Rebecca, published 80 years ago this summer. Told in the timorous voice of a young woman swept off her feet by a dashing older man, Rebecca’s enduring popularity is testament to a number of things: Author Daphne du Maurier’s considerable talents, the dark mysteries at the heart of every marriage and our enduring fascination with beautiful dead women and how they got that way. Du Maurier claimed the book is about jealousy. But it’s also about how we leverage secrets, so I couldn’t help notice how the plot of Rebecca eerily mirrors Hope Hicks’s beleaguered stint in the current U.S. administration.

Each of their stories begins with our shy protagonists leaving the employ of an imperious American woman (Mrs. Van Hopper/Ivanka Trump) after a rich, powerful man (Maxim de Winter/Donald Trump) sweeps them into their heady orbits. In Rebecca, moments after de Winter proposes to our narrator, he lists the array of menial tasks for which she will now be responsible: “new library books, flowers in the drawing room … someone to pour my tea.” Ms. Hicks’s own tasks reportedly included spoon-feeding Donald Trump his morning news, tweeting his tweets and steaming his slacks while he was still wearing them.

The similarities continue after each woman accompanies her man back to his legendary mansion (Manderley/the White House), haunted by the unforgettable presence of the previous tenant (Rebecca/Barack Obama), who everyone seemingly adores, especially the depressed staff (Mrs. Danvers/the Deep State), who can’t shut up about them. There, unable to discern truth from fiction, our protagonists’ inexperience undermines them at every turn. Dubious outsiders point their fingers (Rebecca’s former lover/the Mainstream Media), threatening to expose the man’s crimes (a murder/possible Russian collusion). Inquiries are called. Prison looms darkly. Our protagonists are forced to decide whether they’ll keep their man’s secret or betray them, whether they’ll remain steadfast or save themselves.

In Rebecca, Max confesses to our narrator that he murdered his promiscuous first wife, Rebecca, to protect his brand. Instead of being terrified, our narrator could not love him more. In fact, she passionately rallies to defend him, faking a fainting spell at a critical moment in the inquiry to distract, to obstruct justice, if you will.

In the case of Ms. Hicks, we don’t know if Mr. Trump broke the law or if she is complicit in any crimes. But she has admitted to the special counsel that she told “white lies” for the President and reportedly vowed that an e-mail implicating Donald Trump Jr. in Russian collusion will “never see the light of day.”

What makes women such as this stand by men such as that? In the case of Rebecca, the answer is easy. What option did a penniless, powerless female character have back then? Plus, du Maurier is so expert a storyteller, our narrator’s voice so persuasive, that readers find themselves rooting for Max to get away with murdering his first wife, so they can stay together. In doing so, du Maurier makes us, the reader, complicit, too.

There is a scene in Rebecca, after de Winter proposes to our narrator, when she’s launched into an elaborate daydream in which her status is instantly elevated and those around her bow down, flattering her behind her back, “… a whisper on the fringe of a crowd, and I would turn away, pretending I had not heard.” I imagine Ms. Hicks having this same daydream after Mr. Trump tapped her for the campaign. While he spotted an opportunity to use her beauty as a shield from the ugly nature of his politics, what was in it for her? A fast track to power and prestige under the delusion that she was doing it for love of country. But Ms. Hicks can’t pretend not to hear what’s being said behind her back. She can’t lie about what she knows. And we don’t want her to. We want Ms. Hicks to betray him, to expose his secrets, to become the heroine of her own story. But if past is prologue, she may remain as loyal and steadfast as the second Mrs. de Winter, minus any of her rewards. That’s what makes her so frustratingly regressive, the kind of female character that might have been conjured by du Maurier 80 years ago.

At the end of each story, both women are in exile after the big house burns – in Rebecca, literally; in Ms. Hicks’s case, increasingly metaphorically. Their respective futures remain uncertain. Max de Winter escapes justice but our unnamed narrator is forever shackled to him, assiduously avoiding the news; Hope Hicks, similarly burdened by Mr. Trump, only wishing she could.

What market players are saying about Gary Cohn’s exit
March 7, 2018 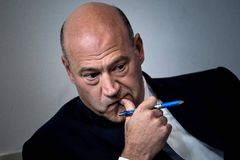 White House economic adviser Gary Cohn to step down after trade disagreement
March 6, 2018
Opinion
Does anyone want to work at this White House?
March 1, 2018