“Sorry Dems,” a headline blared the other day, “if Trump’s impeached, he still wins.”

It’s not as far-fetched as it sounds.

The evidence against U.S. President Donald Trump on the charge that he abused his power by trying to induce the Ukrainian government to assist his re-election bid does indeed look damning.

The latest fusillade came Tuesday in the form of testimony by Army Lieutenant-Colonel Alexander Vindman, a top national security official, who was in on the President’s highly contentious July 25 call to Ukraine’s President. Lt.-Col. Vindman, a man of reputed integrity, said that he heard Mr. Trump appeal to Volodymyr Zelensky to investigate political rival Joe Biden.

But the impeachment proceeding, which will be formalized with a vote by lawmakers on Thursday, offers numerous escape valves for a President who claims, with his customary bludgeoning force, that it is just another witch hunt.

Closed-door testimony will wind up shortly, and then it’s on to public hearings, which are expected to finish before Christmas when a vote in the House to impeach Mr. Trump will be taken. It will very likely pass.

Just as likely is an acquittal at the trial in a Republican-controlled Senate. The upshot will surely see Mr. Trump claiming vindication. While taking a victory lap, he will likely say that it’s just like the Russian collusion fiasco. Another failed smear campaign by the Democratic party.

A much less likely scenario is that new and extremely damaging information with respect to presidential skullduggery emerges in the hearings. This would lead to Mr. Trump’s losing the support of 20 or more senate Republicans, which would be enough to ensure a conviction in that chamber.

But that would still not mean end game. Get-out-of-jail cards would still be on the table.

The Constitution grants senators the power to convict and remove a president. But there’s a more obscure clause that allows for a second vote, on whether to disqualify the person convicted from ever holding office again.

Whether such a vote will even be taken is uncertain. But if it isn’t, or if he survives such a vote, Mr. Trump could still be free to run for president as an independent or under the Republican Party banner. The likelihood is that his big support base would still be with him, fuming that he’s been the victim of a deep-state plot, urging him to fight.

All this presupposes that the impeachment process will reach these stages. There is no guarantee of that. Mr. Trump’s legal team is throwing up all kinds of roadblocks to having key witnesses testify before the House Intelligence Committee. Charles Kupperman, the former deputy national-security adviser, this week defied a House subpoena to appear, saying he wants court guidance on the question. That stalling tactic may well be employed by others in the White House.

Also to be considered is the wiliness of Senate Majority Leader Mitch McConnell. He could resort to duplicity, appointing a partisan committee to examine evidence and report its findings to the main body. Or he could call a snap vote.

Given Mr. Trump’s well-illustrated readiness to defy rules and conventions, there are also questions as to whether Congress will be able to impose its will on him.

In the case of the Richard Nixon impeachment, a bipartisan consensus on his guilt emerged. The quest for Mr. Trump’s ouster has already been reduced to tribal warfare. The outcome of the House vote will likely be framed as illegitimate, a result of partisan zealotry.

Revelations on Mr. Trump’s scheming with Ukraine have been pouring in for weeks. Not many find them shocking, not in the context of the standards he has already set.

While there’s support for the impeachment inquiry in the polls, the President’s personal support numbers haven’t slipped much and will likely trend upward, owing to the capture and death of Islamic State leader Abu Bakr al-Baghdadi.

If it so happens that the Senate not only votes to impeach but also to bar Mr. Trump from ever seeking public office again, that’s still not necessarily the end of the convulsive Trump drama.

There are other Trumps waiting in the wings, most notably Don Jr., to pick up the torch. He could well enjoy the support of his father’s base. He could run in his place. 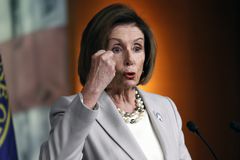