Justin Trudeau strode into the APEC Summit in Lima 17 months ago as the hemisphere’s new kid on the block and consensus papasito.

Mr. Trudeau impressed. These were (and are) priorities for Latin America as well. Many wondered if the Canadian Prime Minister could be North America’s antidote to what they feared was about to emanate from Washington.

Mr. Trudeau returned to Lima last week to attend the Summit of the Americas. He’s still the consensus papasito, but other things have changed.

The Prime Minister is now the hemisphere’s elder statesman among the liberal democracies, not counting the lame ducks in Brazil, Colombia and Mexico.

He now has a track record.

CEOs and government and business association leaders like what they have seen. There’s no evidence to support speculation by some in Canada that the B.C./Alberta pipeline spat will tarnish Canada’s or Mr. Trudeau’s business-friendly image among Latin American business leaders. Countries have been grappling with how to streamline their very imperfect procedures to obtain social licenses for large infrastructure projects. Their business and government leaders view Canada as a model for how to handle these issues and understand that reconciling competing interests is arduous.

Under his leadership, the U.S. has marginalized itself as a productive force in addressing Latin America’s priorities. Mr. Trump has manifested many of the region’s worst fears and added a few more. Latin America takes note when Mr. Trump renounces multilateralism, trade and climate change treaties, about-faces rapprochement with Cuba, caricatures Mexicans, extols military rearmament, speculates about U.S. military intervention in resolving the crisis in Venezuela, uses populist rhetoric to degrade democratic institutions and fixates on security and drugs to the exclusion of all else.

Latin Americans know about populism, nativism, xenophobia, militarism and all the rest of it. They have fought hard and relatively successfully to turn away from it.

The lament among some U.S. analysts – that Mr. Trump’s no-show at the Summit was a lost opportunity for the U.S. to demonstrate its alignment with the region – is misplaced. Inviting the boorish uncle to upset a family reunion for the sake of family unity is counter-productive. The underlying and unfortunate lament is that Mr. Trump is what he is and U.S. policy is what it is. Maybe a silk purse can be made out of a sow’s ear, but Latin American leaders aren’t waiting for that miracle and are getting on with conducting their business in this new reality.

To the emerging status of Mr. Trudeau, the shrinking engagement of the U.S. and Russia’s stepped-up misinformation practices, add the continued increase in Chinese business and political engagement in Latin America and you have a sense of some of the major changes over the past 17 months.

When these factors – and presumably others – move Latin American business and government leaders and even European media to speculate in Lima that it is now Mr. Trudeau’s and Canada’s time in the Americas – something that we presaged in these pages 17 months ago – then you know that the sentiment is more than blind Canadian boosterism.

So what can Canada and Mr. Trudeau do to capitalize on this opportunity, without falling into the twin fallacies that a Canada of 35 million people has limitless resources to leverage and that the U.S.’s loss is Canada’s gain? After all, everyone loses when the U.S. does not engage constructively.

Here are a few ideas:

Canada can continue to be a leader and support the region – as it has done in the case of Venezuela – in its efforts to strengthen democratic governance and institutions.

It can emphasize its diplomatic agility and support for rules-based multilateralism by (finally) putting forward a Canadian candidate to lead the Organization of American States – a position that cries out (finally) for a female leader.

It can continue to push and support progressive trade and integration treaties – like Mr. Trudeau did in a public display with Pacific Alliance leaders at the Summit of the Americas and continues to do in its negotiations with Mercosur.

Mr. Trudeau can invite more Latin American leaders to Ottawa. Inviting Argentine President Mauricio Macri, the host of this year’s G20 meetings, to the G7 meeting in Canada in June would be a good start.

A photo of the two leading papasitos (I’m told) would play well throughout the hemisphere. 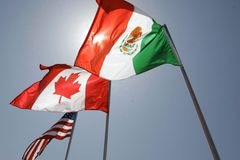