Keith McArthur is the CEO of CureGRIN Foundation and creator and host of Unlocking Bryson’s Brain.

Around Father’s Day in 2018, scientists told me the unthinkable – that it might be possible to cure my son Bryson’s rare genetic disease.

Bryson has GRIN Disorder, caused by a mutation in his GRIN1 gene that prevents him from walking or talking or feeding himself. Even though he’s 13, his brain functions at the cognitive level of a toddler, according to a recent report from a developmental psychologist.

So when researchers told us his symptoms might some day be reversed, I dedicated my life to connecting scientists and pushing for a cure.

But the more I learn, the more I struggle with an important ethical question: Is it ableist to want to cure my son?

But for many people living with disabilities, cure implies there’s something wrong with them, something that needs fixing. And some people who rely on wheelchairs say that even if there were a cure that could allow them to walk, they wouldn’t want it.

As Bryson’s dad, I’ve always thought of myself as an advocate for disability rights. I proudly stood up to the local school board to argue people with special needs deserve more of a say about where they go to high school. I’ve leveraged my privilege to complain about broken elevators and insufficient handicapped parking.

And it felt like my efforts to bring together researchers and push for a cure was the ultimate act of advocacy for my son and others like him.

But the other day, someone I don’t know called me ableist.

The accusation came in a negative review for Unlocking Bryson’s Brain, a podcast series about my son. The reviewer identified as someone with a lifelong physical disability and said my family’s “obsession with getting a cure” made them feel uneasy and uncomfortable.

“I’m sorry, but this guy’s is not a disability advocate. He’s an ableist who is obsessed with transformation,” the reviewer wrote.

The podcast has elicited positive feedback from many other people with disabilities; so I’m wary of overreacting to one negative review. But as much as I want to push back and say, “That’s not who I am,” there’s part of me that wonders whether there’s truth in that review.

Am I obsessed with cure? Maybe I am. In addition to my search for a cure for Bryson, and my podcast about this search, I’m also chief executive of CureGRIN, an organization focused on finding a cure for GRIN Disorder.

Even my Twitter bio identifies me as a “rare disease dad searching for a cure.” So yes, I’ve internalized this search for a cure and made it part of my personal identity.

But does that mean it’s wrong?

It doesn’t feel wrong. After all, I worry that Bryson can’t communicate his wants and desires, that he can’t pilot his own wheelchair, that he can’t defend himself from those who might want to do him harm. I’m worried about his violent episodes when he flails around until he’s covered in bruises and bites himself so hard we’re worried he’ll tear an artery. I’m terrified about what’s going to happen to Bryson when his mother and I aren’t around to look after him. Don’t I owe it to Bryson to push for medicines that can give him more agency and security?

But how much cure is too much? Is it moral to push for safety and autonomy, but ableist to wish for a cure that could make Bryson neurotypical?

Because if I’m being honest, that’s what I want. If there were a magic pill that could make Bryson fully neurotypical, I would give it to him. I want him to be able to walk on his own, and feed himself, and tell me what his life has been like for the past 13 years. And when he’s grown up, I want him to be able to live independently, and have a job, and get married and have kids.

Bryson is perfect; he’s extraordinary. But I want more than that. I want him to be able to choose to be ordinary.

The trouble is that Bryson can’t choose. Yes, he’ll sometimes make simple choices, for example by reaching to indicate if he wants pudding or applesauce as a snack.

But when I ask him whether he wants me to continue on with this journey to find him a cure, he just looks back at me with his big beautiful eyes.

So even though I understand that cure is an ethical quagmire, I feel compelled to carry on.

The question is how to push for a cure for Bryson without making others living with disabilities feel uneasy and uncomfortable.

As part of my journey, I’ve spoken with ethicists and activists with disabilities about the concept of cure and how to make sure I pursue my quest in an ethical way.

Part of the solution is to make sure I’m giving Bryson as much of a voice as possible. Even if he can’t answer complex questions around a cure yet, it’s important that I’m always asking myself: “What would Bryson want? And is it different from what I want for him?” And if there are partial therapies in the future that could allow Bryson to communicate, I need to be willing to listen to what he has to say about this journey for a cure.

It’s also critical that I recognize that a cure for Bryson may never come. And even if there are therapies that can make a radical difference in his life, therapies that can provide safety and agency, they are not likely to make Bryson neurotypical. Bryson is likely to live out the rest of his life as someone with high needs.

And that’s okay. Because Bryson is already perfect. It’s the world that isn’t.

So if the anonymous reviewer is right, if I really am obsessed with transformation, then I need to redirect some of that obsession away from changing my son and toward changing the world. Because that’s another way I can help him to be safer and have more autonomy – by working to dismantle the barriers, both physical and systemic, faced by all people living with disabilities.

Finally, it’s critical that I continue to cherish Bryson for who he is today, a vibrant teenager who knows joy and sadness, an extrovert who loves being around people, a loving soul who wraps his arms around his dad and pulls me close, showering me with wet toothy kisses. How many fathers of able-bodied kids will get such a wonderful gift from their teenage sons this Father’s Day?

I’m giving MS the finger, but I admit, this disease has taught me resilience
May 29, 2020 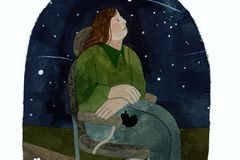 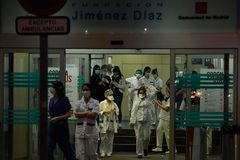 Parkinson’s: an insider’s guide to an absurd disease with absurd symptoms
February 21, 2020 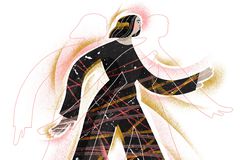