After six months as U.S. President, Mr. Biden has received a clear response from those allies: “Pick one.”

The notion of a united front against authoritarianism among functioning democracies became a topic of international diplomacy during Donald Trump’s presidency. It became apparent to countries such as Canada that a united approach – what the federal government called the “rules-based international order” – really can’t achieve much, beyond largely symbolic sanctions and embargoes, without the United States on board.

Now that the United States is on board, its administration is learning the opposite lesson. If it genuinely wants a united front, it will have to make some compromises and weaken its confrontational stand.

Mr. Biden appears to be ready to do so – because he has little choice. This is not the Cold War, when the U.S. was so prepotent that it really didn’t need Europe and Japan and South Korea and Canada (except, sometimes, as places to put soldiers and missiles).

China is now such a large economy, with such a wide range of export markets, that harsh U.S. trade penalties – even the prospect of a scorched-earth, total cutoff from the U.S. economy – are not enough to compel a change in behaviour. Russia’s economy is far smaller, but European powers are unwilling to cut themselves off from their energy-rich, intimidating neighbour.

Mr. Biden has been surprised to learn, after a series of summits and meetings, how little his allies, especially in Europe, are willing to conform to Washington’s approach.

Foreign-policy officials in France and Germany tell me they see more value in keeping economic and political ties with Beijing – as potential instruments of persuasion – and don’t want to be stuck with an increasingly protectionist United States as their main partner when it still isn’t clear to them that the demagoguery of the Trump years won’t return.

Mr. Biden, if he doesn’t want to go it alone, will need to bend.

Last week I interviewed Philip Reeker, who, as acting Secretary of State for European and Eurasian Affairs, has been Mr. Biden’s point person for trying to square that circle. (The interview was part of an online forum organized by the Atlantic Council.)

“The common denominator is the need to engage China from a position of strength and unity with our allies and partners,” he said. “We have made very clear that it is not a question of forcing others to choose between the United States and China. … We are much stronger, more effective, when we work together. That’s key when we’re addressing China’s abusive and coercive economic practices, intellectual-property threat and human-rights record, including the use of forced labour.

“No one country – even a country as powerful as the United States – can deal with the challenges we face now.”

I pressed him on the question that arose from Mr. Biden’s unsuccessful European meetings: Will the United States be willing to compromise in order to achieve a common message?

“You have to give some of these things some time,” he said, pointing to a number of concessions Washington has made, including its recent decision to end the brutal trade dispute between competing U.S. and European aircraft manufacturers Boeing and Airbus SE under terms that probably benefit Europe more.

Indeed, a few hours after we spoke, Mr. Biden emerged from a day of meetings in Washington with German Chancellor Angela Merkel to announce an even larger compromise. The U.S. will drop its economic sanctions against the Russian firms responsible for building the Nord Stream 2 gas pipeline to Europe – a megaproject whose main purpose, in the view of many observers, is to punish Ukraine and Poland by rerouting existing gas supplies around those countries. A number of German companies stand to profit from the venture, which would likely have been halted under U.S. sanctions.

Although Ms. Merkel agreed to help compensate Ukraine for losses it will incur as a result of the pipeline, it marks a rare economic win for Russian President Vladimir Putin – one the U.S. has no reason to seek, unless it’s in exchange for co-operation from European partners on larger confrontations with Russia and, especially, China.

Mr. Biden knows the Europeans aren’t likely to move much further in his direction on their own (especially after September’s German election, which will likely produce an even less confrontational chancellor). But he also knows this is a fight he is not going to win unless he can engineer some way, however awkward, to get most of the other democracies in his corner. 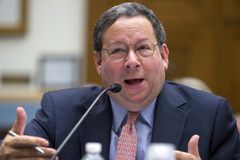 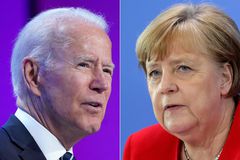 Biden urges Putin to crack down on cybercriminals
July 9, 2021