Kylian Mbappé was not even born the last time France’s national soccer team, which is commonly known as les Bleus, won the World Cup. But if he wasn’t already feeling the pressure to end that two-decade drought heading into Sunday’s final against Croatia, the 19-year-old star forward and most of his teammates must also contend with being judged not just by the quality of their game.

If they win, they will be national heroes, held up as models to emulate for young people of Arab and African backgrounds in France’s seedy suburbs. The chants of “Liberté! Égalité! Mbappé!” that followed France’s June 30 win over Argentina, a victory secured by Mr. Mbappé’s two goals, will fill the Champs-Élysées anew. Politicians will hail Mr. Mbappé, the son of immigrants from Algeria and Cameroon, and Samuel Umtiti, the Cameroon-born defender who scored les Bleus’ only goal in its 1-0 semi-final win over Belgium, as successful examples of integration in an increasingly diverse society. Polls will show an increase in favourable attitudes toward immigration, for a while, anyway.

If they lose, France will be back to normal on Monday. This means that debates about how to tackle crime in the suburbs, how to deal with the influx of migrants from Africa or how to reduce unemployment among ethnic minorities will be dominated by Marine Le Pen’s Rassemblement National (the new name for the old National Front), which favours deporting non-citizens and closing France’s borders to immigration.

Wondering why the national soccer team does not have more white players will also once again become common. Indeed, when the 23-player roster of this year’s team was unveiled in May, social media lit up with the usual outrage. One common complaint was that only five players were so-called Français de souche (or old-stock French), although that count usually included Antoine Griezmann, the superstar forward whose roots are German and Portuguese.

In a country that has always had a tense relationship with its North African minority, and which has seen a gradual hardening of public opinion toward newcomers, the racial make-up of France’s national soccer team has been the subject of one polemic after another in recent years as immigrants and the children of immigrants squeezed out white players on the team.

When Zinedine Zidane, the son of Algerian immigrants, led a racially diverse French team to victory in the 1998 Cup, many saw it as watershed that would help neutralize the anti-immigrant resentment stirred up by the National Front of Jean-Marie Le Pen. Two years earlier, during the Euro Cup championship, Mr. Le Pen lamented bringing in “foreign players and baptizing them as the ‘French team.’”

In 1998, however, the bleu-blanc-rouge of the French flag gave way to a new source of national pride – the black-blanc-beur of a French soccer team that represented the country’s multicultural reality, with a plurality of Arabs of North African descent (beurs) and players with roots in sub-Saharan Africa. In the afterglow of that victory, France seemed to be at peace with its new identity.

It didn’t last long. In recent years, the composition of France’s national soccer team has more often been a source of discord than unity. In 2005, after riots in several French cities over police tactics toward immigrant youths, essayist Alain Finkielkraut inadvertently poured oil on the fire by declaring that France’s soccer team had become “black-black-black, which makes all of Europe laugh at us.” He apologized, but the damage was done.

Another polemic erupted in 2011, after the French news site Mediapart reported that top soccer officials had secretly agreed the previous November to limit the proportion of black and North African players on the national team to 30 per cent. The Fédération française de football strongly denied the report. But the genie was out of the bottle, giving right-wing commentators an excuse to float the idea.

In 2016, French coach Didier Deschamps was accused of racism for excluding Karim Benzema from the team, even though he insisted the player, who is of Algerian descent, was left off the roster because of his own legal troubles and off-field conduct. Mr. Deschamps, who played on the 1998 World Cup winning French team, is now accused of overcompensating by fielding a team for the 2018 Cup that is almost exclusively non-white.

If that team wins on Sunday, French fans won’t complain about the colour of the players. For a few days, anyway, everybody will just be a bleu.

Exhausted Croatia must draw on reserves for World Cup final against France
July 12, 2018 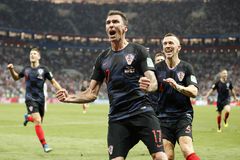 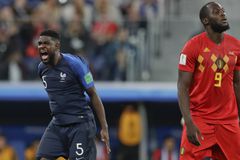