U.S. President Donald Trump has been in reversal mode of late.

He did so on immigration, modifying his stance after a national outcry about separating children from their families at the U.S.-Mexican border.

He did so in regard to British Prime Minister Theresa May, pillorying her in a British tabloid, only to do a volte-face and tell the world she was doing a great job.

He did so on his summit meeting with Russian President Vladimir Putin, leaving one impression one day, doing a U-turn the next and a backflip to follow.

The destabilizer likes to destabilize. But if bombarded by enough voices of sanity and if made to think that he can be politically damaged by his latest thunderbolt, he is capable of backing down – while not really admitting that he is backing down.

Herein lies the hope of the Canadian government and many others on his threat to impose devastating tariffs on imported vehicles and auto parts. The hope is that sanity will prevail. And if recent days are any indication, sanity appears to be gaining momentum.

The car tariffs are opposed by Mr. Trump’s domestic auto manufacturers, by Congress, by NATO allies, by economists, by industry studies, by lessons of history and most anything resembling rational calculation.

General Motors has warned the administration against enacting the measure, citing a negative impact on investment, wages and employment. A study released this week by the Center for Automotive Research showed the tariffs would cause a big hike in car prices and a big loss in American jobs.

Vehement voices came together Thursday at Commerce Department hearings on the tariff proposals. It was an onslaught. More than 40 parties testified. With the exception of labour unions, representatives from most every component of the U.S. automotive value chain raised alarm bells.

But if it sounds like a no-brainer that the Trump tariff plan is headed for the dustbin, there are some who believe the President’s mind is already made up, that the hearings are just to show that consultation was undertaken, and that he will move ahead with the measures that promise to be far more punishing than his steel and aluminum tariffs.

The Trump tariffs are being proposed under the guise – laughable to most observers – of national security, the charge being that auto imports cripple the domestic industry, thus undermining U.S. research and development. The Commerce Department began investigating in May and will report to the President shortly on its findings.

The security rationale is essentially a cover for the President’s program of economic protectionism. At the Commerce hearings, David O’Sullivan, ambassador for the European Union, minced no words, saying the invocation of a national security threat from allies is “absurd.”

The governments of Mexico, Canada and Ontario joined in with similar appraisals. “Rather than potentially strengthening U.S. national security,” Canada’s deputy ambassador to the U.S. Kirsten Hillman said in a strong presentation, “tariffs on automotive imports from Canada would undermine U.S. security and would have a devastating impact on U.S. competitiveness in the auto sector.”

She made the point that given the degree of integrated cross-border production, “Canadian cars are U.S. cars,” explaining that assembled vehicles exported from Canada to the United States contain more than 50 per cent U.S. content.

Mr. Trump can back off on the auto tariffs without much embarrassment. A filing by Commerce that national security isn’t endangered would give him cover. He could continue his protectionist policy-making in other areas.

The President is still holding to a hard line for significant NAFTA reform. His trade officials are negotiating with the new Mexican government with an eye to a possible separate bilateral deal. That would mean the end of NAFTA. Negotiations would begin on a new bilateral deal with Canada.

But overhanging all considerations is still Mr. Trump’s obsession with trade deficits. The U.S. has a US$32-billion auto trade shortfall with Europe. Statistics like this are capable of blinding him to all other rational considerations. His pattern of reversing himself might not apply to a case in which there is much cause for a reversal. 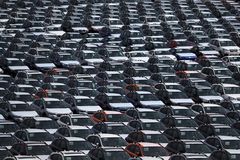 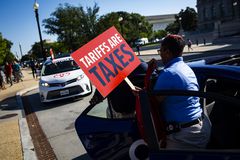 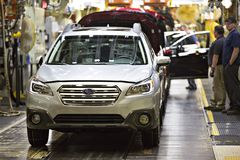