Perhaps Prime Minister Justin Trudeau should have gone to Barbados after all. At least then he could’ve gotten fresh photo ops, a few more promises of support for Canada’s vain quest for a UN Security Council seat and maybe even a tan.

But the Prime Minister decided to cancel his trip at the last minute, belatedly recognizing matters of urgent concern here in Canada.

By Sunday night, when the Prime Minister’s Office finally announced its change in itinerary, the notion of Mr. Trudeau continuing to solicit himself abroad while the crisis over the Coastal GasLink pipeline festered at home had become patently ridiculous. If Canada didn’t need a leader when passenger trains were shut down, when farmers were facing backlogs, when protesters were blocking legislatures, when CN Rail was handing out temporary layoff notices, when food and fuel supply chains were being disrupted, when injunctions were being ignored and when there was no discernible path to resolution – well, then Canada didn’t need a leader at all.

So Mr. Trudeau correctly, if tardily, recognized Caribbean leaders would have to make do with Canada’s Foreign Affairs Minister, and committed himself to stand in the House of Commons Tuesday, ostensibly to offer the country some much-needed direction.

Instead, the Prime Minister presented a bit of everything, and nothing in particular. To those affected by the blockades, Mr. Trudeau offered empathy: “I know that you are going through difficult times.”

To those concerned about the impotence of court orders, he offered vague assurances: “Our government’s priority is to resolve this situation peacefully, but also to protect rule of law in our country.” To Wet’suwet’en hereditary chiefs who oppose the pipeline, he suggested a meeting: “I hope that the offer will be accepted.” And to … himself? He offered censure: “It is unacceptable that Indigenous peoples are still denied rights and lands.”

The Prime Minister’s overall message was that the way forward is through dialogue and listening, although he didn’t specify to whom the government would be listening – the First Nations bands who support the pipeline or the Wet’suwet’en hereditary chiefs who do not – and why this exercise in listening and dialogue would be markedly different from earlier consultations.

Indeed, as noted in the interlocutory injunction issued by the B.C. Supreme Court in January, there is no dispute from either party that Coastal GasLink consulted for years with both elected chiefs and council and Wet’suwet’en hereditary chiefs. The only dispute is whether the province has the authority to grant permits for construction on Wet’suwet’en territory, which, according to the hereditary chiefs, it does not. That is a fundamental issue that won’t be resolved with a few meetings with federal ministers.

To be sure, Mr. Trudeau is in an impossible situation. He can enforce the law and instruct the RCMP to clear the railway blockades – likely through force, for which terrible and bloody precedents were set during the Oka crisis of 1990, Ipperwash in 1995 and Caledonia in 2006. Or he can not enforce the law, which sets a different type of problematic precedent (though not an entirely novel one, following the Idle No More protests of 2013), and hope that a peaceful resolution can somehow be reached.

Mr. Trudeau made clear his government intends to follow the latter path, but in doing so, he has left a number of important questions unanswered: Will the government allow the blockades to stand indefinitely? What is the plan if supplies start to run low in areas? What measures will be taken if public opinion turns more significantly on blockades and vigilantes try to dismantle them themselves? And perhaps most fundamentally: When and to what extent does a court ruling matter in Canada?

The path forward, already, has hit a few snags. Mr. Trudeau excluded Conservative Leader Andrew Scheer from a meeting of party leaders Tuesday in a needlessly provocative and distracting exercise of partisanship. And some Wet’suwet’en hereditary chiefs have made meetings with federal ministers conditional on the removal of the RCMP from Wet’suwet’en land, as well as the pulling of Coastal GasLink permits.

No doubt the road to a resolution will get even more complicated. This is a conflict that pits traditional Indigenous governing structures against colonial band councils, raises questions about the duty to consult in the absence of an outright veto and probes what it means to be a rule-of-law country when those rules and laws are openly flouted.

It’s the type of conflict for which clear, authoritative, practical leadership is desperately needed, although Mr. Trudeau, so far, has offered little more than vague assurances. Perhaps he should have taken that trip instead.

Opinion
Yes, the blockades are illegal. No, they should not be met with force Subscriber content
February 20, 2020 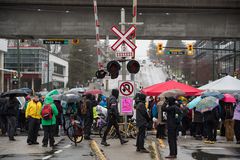 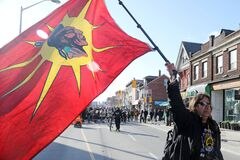 Opinion
The rule of law cuts both ways. Some Coastal GasLink protesters are ignoring that
February 17, 2020 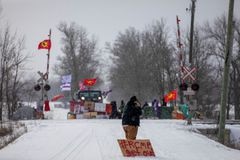