By dint of knee-jerk repetition, many political myths were inflicted upon the multitudes in 2019. Count among them the notion that the Democrats have fielded a feeble set of candidates for the presidential nomination, none of whom will be able to take down the White House incumbent. The impeached White House incumbent.

To hear the naysayers, you’d think the Democrats were about to nominate a Jeremy Corbyn. Balderdash. Anyone who saw the stellar quality of last week’s debate in Los Angeles would be cured of the misconception. This is one of the stronger slates Democrats have ever fielded.

To find a more impressive contingent you might have to go back to 1972, when the entrants included Ed Muskie, Eugene McCarthy, Henry Scoop Jackson, Hubert Humphrey, George McGovern, Sam Yorty and Shirley Chisholm. The Dems foolishly ended up selecting Mr. McGovern, who went on to get wiped out in every state except Massachusetts.

Because there’s been more than 20 candidates in the field this time around, it’s been difficult for any one to forcefully command the stage. The punditocracy has leapt to cynical conclusions without even one primary being contested. In other words, before the real show has even begun. It’s not until the Iowa caucuses and the New Hampshire primary that the public focus becomes intense, that the field is winnowed down, and that surging momentum by a candidate is captured.

Today’s Democrats have the most experienced candidate ever in Joe Biden, the former vice-president who was rusty in his first debates but shone in the latest one. The Democrats have youth and brilliance in 37-year-old Pete Buttigieg, a Rhodes scholar with Kennedyesque potential. They have powerful women candidates in Elizabeth Warren and the midwesterner Amy Klobuchar, both of whom have more pizzazz than wooden Hillary Clinton. They have a seasoned cerebral moderate in Michael Bloomberg and candidates offering a bold new way in Ms. Warren and firebrand Bernie Sanders. They have new thinking with Andrew Yang.

The knock that no strong favourite has emerged is wrong. Even with his early substandard debate performances, Mr. Biden’s support level has held remarkably firm, well ahead of the others. For the many yearning for a return to normalcy after Donald Trump, it would be hard find a better candidate than Mr. Biden.

Mr. Trump feeds off the less educated. He lends credibility to the notion embodied in the Winston Churchill observation that “The best argument against democracy is a five minute conversation with the average voter.” But Mr. Biden has working-class appeal. He can connect with ordinary people.

A knock is that Mr. Trump could take any of the candidates to the woodshed in the debates. Yet Ms. Clinton debated him three times and the consensus was that she won all of them.

For a display of sharp debating skills how about the Warren-Buttigeg confrontation last week? Ms. Warren pointed to a fundraiser Mayor Pete recently held with plutocrats in a wine cave. “Billionaires in wine caves should not pick the next president of the United States, Mr. Mayor.” Zap! You’re frozen, Mayor Pete. Only he wasn’t.

After noting that he was the least wealthy of all candidates on the stage, Mr. Buttigieg pointed out how Ms. Warren’s campaign transferred millions drawn from well-heeled fundraisers for her Senate campaign to her presidential campaign. And then the capper. “This is the problem with issuing purity tests you cannot yourself pass.” Ms. Warren recoiled with embarrassment.

The Democratic candidates all have weaknesses. They’re too old or too young or too radical or too moderate or too white. But do any of them have the baggage of an impeached race-baiter who makes a mockery of the truth on a daily basis, who defies the Constitution, denigrates women, divides the country, insults fellow Americans, caters to the rich and ought to return to elementary school for spelling lessons?

Mr. Trump does have a roaring economy going for him. Democrats will have to show that it isn't his doing, that continental and global trends brought it on.

As for the Democrats fielding candidates who are too radical or outside the mainstream to be elected, critics need be reminded of the election of an African-American president in 2008 and of Mr. Trump in 2016.

Americans elected those candidates because they wanted change. There’s rarely been a better case for change than now. The Democrats have quality candidates who can bring it.

Analysis
Democratic debate, like impeachment vote, is unlikely to alter the views of Americans at this point
December 20, 2019 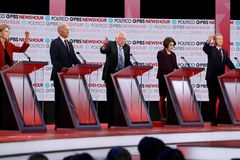 Opinion
There are lessons to be learned from Kamala Harris’s Democratic campaign
December 4, 2019 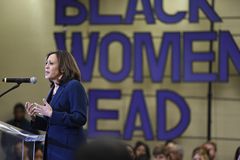