Galadriel Watson is a writer living in British Columbia and author of the forthcoming book Extreme Abilities: Amazing Human Feats and the Simple Science Behind Them.

I sit at a long, high table in a hotel lounge, cradling a cup of tea. Around me, other patrons clutch pints of beer but drinking isn’t my goal – even though studies have found that just one glass of alcohol would help me at my task, loosening my tongue and inhibitions. No, I’m not here to pick up men. I’m here to speak French.

I have no need to speak French. I was born to an anglophone family. I live in a highly anglophone small town in British Columbia. I work as an English writer. Other than short vacations to French-speaking locales, I may never have valid reasons to parler français. Yet, I immerse myself as much as I can – including this get-together, one of a series of chats I’ve set up with other French-interested folks. For I’m determined to become bilingual.

This self-induced challenge stems from my teen years. I was born in Alberta and did elementary school there. When my anglophone mother moved back to her hometown, Montreal, I followed. While I continued my English-speaking life, including attending an English high school, the world around me began to spin in French. I was in that milieu for nearly a decade. The language seeped in.

In retrospect, I was decently bilingual. I even studied a year of CEGEP (the college between high school and university) in French. I left because I didn’t like the way they taught math – not because I couldn’t understand.

Still, my tongue felt thick when I spoke French. If I started speaking it to receive service – at a clothing store, in a restaurant – the people would hear my accent and switch to English. With my many bilingual university classmates, I preferred to let them make the effort. After university, I returned to Alberta. My French fizzled.

Over the years, people would discover my Montreal background and ask me if I spoke French. I would say yes – and then hope they wouldn’t test me on it. “Rusty” wasn’t a good enough term to describe the state of my skills. “Fossilized" was better – the impressions were there, but not the life.

Several years ago, I decided I’d had enough of claiming, not doing. I would speak French again. I could be just as bilingual as my old university classmates. Damned if I needed to speak it or not.

Hence my regularly scheduled chats. Books in French. Radio in French. A pen pal in Paris. Through this fabricated immersion, I’ve improved to the state of finally being “rusty.” My tongue isn’t quite so thick.

At the same time, my two children – ages 20 and 17 – don’t have these goals. They can cough up some rudimentary high-school French – describe someone’s hair colour, name a sport – but that’s as far as their current levels of enthusiasm take them. And that’s okay.

But why must I become bilingual while an English-speaking life is fine for my kids? Why, when they were younger, didn’t I line up to register them in oh-so trendy French immersion? Why didn’t I give them every opportunity in this bilingual country they could possibly have?

To be truthful, it may be because my small town doesn’t offer French immersion. But even if it did, would I have sent them to it? I like to think I wouldn’t have.

As a writer, I champion the English language – and I’ve seen what a sorry state it’s in. When editing other people’s work – or, worse, browsing Facebook – I’ve cringed at how few anglophones have a solid grasp of the written version of their own native tongue. Sure, most can get their ideas across, but the text is awkward or spelled wrong or grammatically incorrect. Others create an incoherent mess.

I’ve also taught college-level creative-writing courses. I had expected imperfect text – my standards are high. But the assignments the students handed in… a handful were cleanly written; a bunch were in the middle; far too many were appalling. And I mean barely comprehensible. We spent a class on grammar: They seemed to understand the concepts of run-on sentences and sentence fragments. When I quizzed them afterward, their answers proved far too many of them didn’t.

I was tempted to ask who had studied high school in French immersion, spending their days learning a second language while neglecting their first. I hope the number would have been high. Otherwise, our English-language schools are failing us.

So my children remain unilingual – and decent at writing in English. Meanwhile, already secure in my English, I bump up my French by reading and writing and listening and chatting. At the next rendez-vous, perhaps I’ll order a wine. If it helps me reach my goal of being bilingual – or at least feeling bilingual – all the power to it. 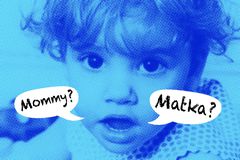