John Boyko is the author of seven books, with The Devil’s Trick: How Canada Fought the Vietnam War, due in April.

A photograph has the power to change minds.

I am betting you can easily picture the lone protester standing before the line of tanks in Tiananmen Square; the determined look on the face of Terry Fox with the Trans-Canada Highway stretching forever behind him; the red fireball of the second plane hitting the World Trade Center. They touched our hearts and changed how we think and see the world. But there is one in particular that affected us deeply, decades ago – one that we should re-examine now, to tap into its magic again.

On Christmas Eve in 1968, NASA astronaut William Anders peered out a small hatch window as his Apollo 8 spacecraft was beginning its fourth of ten orbits around the moon, and what he saw gob-smacked him. Grabbing his Hasselblad camera, Mr. Anders floated weightlessly to another window for a better view, and snapped an image of the Earth rising over the moon’s grey wasteland, reflecting sunlight in brilliant blue against the blackness of space. NASA released the photograph on Dec. 30, and it was placed on a stamp and was seen in newspapers and magazines.

It arrived at the end of a horrendous year in world history. Americans had endured more of their children returning dead or damaged from a war in which fewer believed, a presidential election that had seen more of their children beaten by police, race riots that had set cities ablaze, and assassinations that killed Martin Luther King, Jr. and Robert Kennedy. Canadians suffered widening generational, gender, and racial divisions, domestic terrorists killing innocents with bombs in Quebec, and people throwing rocks at their prime minister. Tanks rolled in Czechoslovakia and tear gas scattered protesters in Paris, London and Berlin.

And then, for a moment, at the end of that terrible year in which it looked like the centre would not hold, everyone paused before the power of the picture of the little blue ball in space. The Earth hung there without the invisible borderlines for which so many lives had been sacrificed. For a moment, it looked like we were not divided by nationhood, race, gender, religion or the many other social constructs invented to define us and others. It looked like we were one.

The picture also spurred the nascent environmental movement, informed by the revolutionary concept that we are one people on one planet. Mr. Anders said that, like millions of others, the photograph made him realize that “this is the only home we have and yet we are busy shooting at each other, threatening nuclear war, and wearing suicide vests.”

If the year 1968 was terrible, 2020 might have been worse. But in tragedy, there is hope. Maybe the global pandemic urges us to recall what the photograph had to say so many years ago: We are all in this together. The vaccines are here, but none of us will be safe until all of us are safe – all of us, everywhere. Perhaps the photograph asks us to consider that while each country must commit to combatting climate change, none will be successful until we all are successful. Further, as we emerge from our isolation and all the stores reopen, maybe the photograph will remind us that we make and buy too much unnecessary stuff – that too much ends up getting thrown away, and there really is no such thing as “away.”

The pandemic, climate change, and rampant, empty consumerism remind us that Mother Nature is always the last at bat. And even scarier is that the Earth does not need saving; after all, if we fall to another pandemic, ignore the changing climate, and succumb to shopping as a leisure activity to fill holes in our soul, the Earth will be just fine. We, of course, will be gone – victims of our greed and stupidity, our refusal to read obvious signs, and our stubborn refusal to heed the potent message of William Anders’s photograph.

Let’s look at the picture again – really look at it, this time. Hopefully, with so much at stake and a better future to be forged from the current madness, we’ll not just see it, but truly understand it. 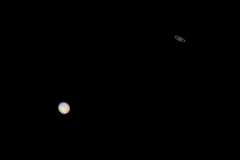 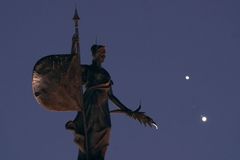 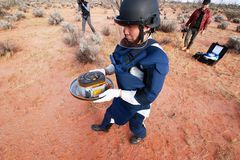