For 30 years, Lebanon’s kleptocratic leaders have deprived its population of electricity, water and even a minimal social welfare net. With a sense of complete arrogance and entitlement, these sectarian oligarchical politicians – a small collection of incompetents; corrupt, failed bureaucrats; and agents for one external force or another – are still manoeuvring to hold on to the power against the millions that demand their resignations in daily protests.

For 30 years, these old oligarchs, under cover of sectarianism, have managed to suppress and pillage what once was a valued model of permissibility and multiplicity in the region. Moreover, now the dire consequence of these years of negligence, corruption and petty bickering is a blast on the scale of a nuclear explosion that has devastated my birthplace, Beirut.

How neglected cargo became a ‘ticking time bomb’ in Beirut

Regardless of the intended use of these explosives, whether the thousands of kilos of ammonium nitrate was intended as a potential weapon in a complex geopolitical configuration, or stored against repeated warnings and advice as a consequence of the failed governance of a failed state, the result is one of criminality, devastation and a deep psychological, cultural and physical wound.

The devastated area is my childhood neighbourhood. Now its streets are carpeted with fragments of glass that once gave some dignity and shelter to its inhabitants. It is also a setting for many of my novels. Down the French stairs of Gemayzeh district, what remains of old Beirut with its distinct Lebanese architecture, a fusion between Ottoman and Venetian styles, is all destroyed. The unique façade that tells of the rich historicity, complexity and multiplicity of the place is now defenceless against the pariahs, the corrupt developers and the governmental officials, who are wetting their lips and sharpening their curved swords to tear down the last glimpses of past history.

It’s precisely that model of an organic architectural blend that many Lebanese celebrate and take pride in. All this seems to be gone now, as does all that seems to be symbolic of the poetic in the grand schema of the perpetual disasters that this place has suffered. The spectre of a Hezbollah-Israeli war; the hyperinflation; a deeply corrupt power that holds the state and its increasingly impoverished inhabitants hostage; a proxy army acting in the service of one foreign nation or another; the threats of various invasions; and the harmful pollution and related environmental distractions are certainly priorities to highlight, requiring sophisticated political engagement, but what is fundamentally at risk here is the death of a precious kindle, any hope for a renewal of the fire of an enlightenment once lost.

I am writing this with the knowledge that my childhood home is destroyed, and members of my family, impoverished, defeated, are roaming from one hospital to the other seeking medical aid.

The image of this devastation is hard to bear, and all the more so when the familiarity of every wall, every sidewalk and every balcony is a part of your personal and collective memory.

It’s maybe cynical to expect in times such as these that readers will anticipate and perhaps ignore the journalistic, overtly political discourse in newspapers, magazines and publications, especially when it is written by a writer who has roots in the place of the calamity. The political analysis and repetition of information that I myself have so often resisted or avoided because of its obviousness and its mass-consumption tendencies toward simplification. Instead, I would like to consider here the longer-term loss, a loss of what is deeper, of what matters, and what otherwise had the potential of lasting.

The cultural contribution of the little country of Lebanon is not entirely a myth. And not yet fully a folkloric, nostalgic retrospective of a lost idea, one on its way to ending. And beyond the inflated or exaggerated nationalistic claims one might make, the existence of a place like Lebanon in the region is a necessity. This place – and I say it with a mixture of pride, a sense of its historicity and mourning – ought to be protected for what it can periodically give and preserve.

What is being destroyed, claimed, appropriated, mismanaged and negotiated by others, on behalf and usually with total disregard toward its inhabitants, is a world heritage, an intersection of religious, linguistic and cultural heritage that the world is about to lose. A place once a refuge for every exile in the region persecuted by one despotic or theocratic regime or another.

I have lived through the civil war and witnessed one invasion and occupation after the other. I have in my youth seen every faction playing a proxy to an outside power, I have lived through massacres on all sides, chaos, and treacheries, killings and bombings, but this last event is what seems the final act on the stage of a victim nation – yes, a victim of a nation – whose friends and foes have equally insulted, used, defecated on and laid claim to under one pretext or another.

And contrary to popular belief, this little nation is not a victim of its own divisions, but a victim of forbidden sovereignty. The image of the bomb that killed so many of our citizens and turned the streets into rubble, veiling buried corpses and breathless survivors beneath collapsed stairwells, is reminiscent of an archetype that humanity so often plays and replays in our movies, psyche and in our wars. It’s a collective, subconscious nightmare that should alarm us all. The swift devastation of an ancient port, and ancient buildings, in an ancient nation is a sample of what is awaiting us all. What every poor, beaten and wounded individual – or country – aspires to have is a home, a bed to heal old wounds and a secure autonomy.

My brother sent me a video of our devastated home. He was silent; there was nothing to say. It seems that when the tragedy is omnipresent and touches everyone, even to breathe, or to complain, is a shameful indulgence. The only noise I heard, as I was attentively listening 9,600 kilometres away, was the inevitable, menacing crackling sound of broken glass, forced upon a shattered nation and its burned homes. 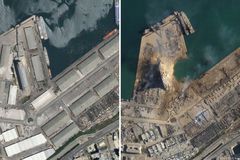 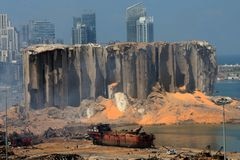 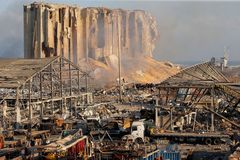