On July 2, Corey Hurren allegedly rammed his truck into the gates of Rideau Hall and, with a loaded firearm, advanced on the grounds where both Prime Minister Justin Trudeau and Governor General Julie Payette reside with their families.

The RCMP swiftly intercepted Mr. Hurren. He reportedly threatened the Prime Minister but never raised his weapon in the two hours between leaving his vehicle and his arrest. In his truck, the RCMP says it discovered additional firearms and a two-page note apologizing for the undefined actions he was about to take. The force’s specialized counterterrorism unit, the Integrated National Security Enforcement Team, continues to investigate, while further reporting paints a picture of a man with grievances and an interest in online anti-government conspiracy theories.

And yet he has only been charged with numerous firearms offences and uttering threats – and not, to the shock of some, with terrorism.

In Canada, terrorist activity is specifically defined in the Criminal Code, and for Mr. Hurren to face such charges, the RCMP and federal prosecutors must believe that there is enough evidence to convince a judge or jury beyond a reasonable doubt of three things. First, that Mr. Hurren intended to endanger someone else’s life; second, that his actions meant to compel Mr. Trudeau to do or not do something; and third, that he was driven to take those actions, in whole or in part, for a political or ideological reason.

This definition creates a high bar, and rightfully so. The stigma and consequences that stem from a terrorism conviction are far broader than a mere prison sentence.

No less important, the “I know it when I see it” approach to defining terrorism is dangerous. U.S. President Donald Trump’s description of Antifa and anti-racism protesters as “terrorists” highlights how the powerful can sweepingly deploy this label to discredit and criminalize their critics.

However, Canadian authorities are historically much quicker to “know and see” terrorism when an individual’s motivations resemble those of al-Qaeda or the Islamic State. There is a reason for this: Parliament added terrorism offences and the corresponding law enforcement powers to the Criminal Code in direct response to the attacks on Sept. 11, 2001. Later amendments responded to the 2014 attacks on Parliament Hill and in Saint-Jean-sur-Richelieu, Que., and to the foreign fighter phenomenon. This history is why terrorism offences align neatly with the behaviours and tactics employed by adherents of violent jihadist extremism; indeed, 56 of the 58 people charged with terrorism offences in Canada since 2001 have been linked to Islamic-inspired extremism.

In one sense, this statistic is troubling. In recent years, deadly incidents – such as the Toronto van attack that killed 10 and the Quebec City mosque shooting that left six dead – did not lead to terrorism charges, even though the accused met the definition so clearly that even the Canadian Security Intelligence Service (CSIS) refers to the events as such. However, this also reflects Canadians’ instinct to generally resolve political grievances through democratic or peaceful means rather than through violence. As a result, acts of civil disobedience, when they occur, are rarely life-threatening. But the alleged actions of Mr. Hurren may signal a dangerous shift in Canada’s political and national-security landscape.

Indeed, the economic and political responses to the pandemic have further fuelled conspiracy-theory groups such as QAnon, which prey on people’s legitimate grievances and fears. As Canadians face increasing personal strain, these theories threaten to corrupt people’s perception of reality and drive them to violent action.

This emerging threat presents a host of challenges for Canada’s security agencies. To start, they must decide whether violence motivated by QAnon-type conspiracy theories is terrorism. CSIS can only investigate terrorism, and many preventative criminal and administrative tools are only available if terrorist activity is involved. If these resources can be deployed, it will take time and resources to retool them to fit this new threat. Perhaps the most difficult challenge will be how agencies would identify who poses an actual threat; holding conspiratorial views or government grievances isn’t a crime, nor is it clearly associated with any particular demographic or region within Canada.

Reducing the threat, whatever we label it, will ultimately demand engagement with the broader population: challenging the fears and narratives at the root of these conspiracy theories, and providing education on how to identify a person who might be radicalizing toward violence. It may seem easy to dismiss such Canadians as nut jobs on the political fringe. But the grievances are real – and marginalizing them will only further cement the institutional distrust that’s at the heart of the problem.

Filipino organizations in Canada call on Ottawa to back opposition to Duterte’s new anti-terrorism law
July 10, 2020 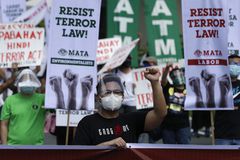 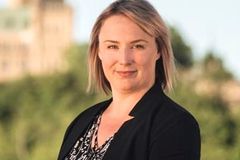