A second consecutive summer of violent street protests is the last thing Hong Kong needs right now in order to overcome the economic contagion from the COVID-19 epidemic.

But that is exactly what the administration of Chief Executive Carrie Lam is setting the Asian financial hub up for, after police arrested at least 15 pro-democracy leaders on Saturday.

The authorities said the arrests related to the alleged organization of and participation in unauthorized protests between August and October of last year, which escalated into violent confrontations with police, paralyzed the city and brought the economy to its knees.

But the crackdown appears to be more of an attempt to tamp down dissent ahead of anniversaries in June and July, as well as crucial Legislative Council elections in September.

To begin, the people arrested were by no means participating in the violence that included petrol bombs being lobbed at police lines or subway stations and private enterprises being vandalized. Among the detained are Martin Lee and Margaret Ng, foreign-educated barristers who have a distinguished record in fighting for the civil rights of the Hong Kong people. And in another blow toward the eroding of press freedoms in Hong Kong, Jimmy Lai, the owner of the immensely popular newspaper Apple Daily, was also arrested.

Mr. Lee, also known locally as the “father of democracy,” is a former chairman of the Hong Kong Bar Association and helped draft Hong Kong’s Basic Law, the city’s mini constitution. Ms. Ng is a former employee of Chase Manhattan Bank and earned degrees from Cambridge and Boston University.

The roundup – the largest of pro-democracy leaders in Hong Kong in a single day – is a clear signal that Beijing, and its obedient administrators in Hong Kong, will not allow the COVID-19 pandemic to dull its ability to quash dissent, whether in the former British territory, Xinjiang or elsewhere. Since the outbreak of protests last year, police have arrested more than 7,800 people, including many on rioting charges that carry jail terms of up to 10 years.

There are indications that Beijing’s patience is running thin with the deteriorating situation in Hong Kong, even though the violent protests have mostly subsided since the COVID-19 pandemic struck the city several weeks ago. Tensions ratcheted up after Beijing’s top official in Hong Kong, Luo Huining, repeated calls for the urgent introduction of draconian national security laws that had been shelved since 2003.

Ever since the protests started last June, sparked by Ms. Lam’s introduction of a controversial extradition law that could pave the way for fugitives to be sent to China for trial, authorities in Beijing have blamed the unrest on foreign entities such as the United States.

The central authorities are also no doubt irritated by paralysis in the Legislative Council, where 14 bills and 89 pieces of subsidiary legislation – including a bill highly prized by Beijing that would punish those who abuse the national anthem – have been stuck in committee because of months of filibustering by opposition lawmakers. It now appears that Beijing, through its representative officers in Hong Kong, intends to take a more aggressive role in the internal affairs of the city, arguing that they are above the Basic Law.

What can the West do to help support the pro-democracy movement? The U.S. and British governments have condemned the arrests, but loud rhetoric has not appeared to be an effective deterrent for Beijing up to this point. But, as some American lawmakers suggested over the weekend, now may be the time to test the effectiveness of the Hong Kong Human Rights and Democracy Act, which would suspend Hong Kong’s special trade status with the U.S.

And then there’s the matter, of course, of the COVID-19 pandemic. With around 1,000 cases – and with no new cases reported on Monday, the first time that has happened thus far – it may not be long before lockdown restrictions are loosened. But the situation will be determined by whether or not police reach for the Prevention and Control of Disease Ordinance, which bans gatherings of more than four people, to use infection as a cover for quelling dissent.

The aggressive actions against pro-democracy leaders, coupled with threatening talk from Beijing, shows that even though the city may have the COVID-19 crisis under control, it is far from being able to keep the streets calm. It’s all adding up to another long hot summer of angry protests in Hong Kong – pandemic or not. 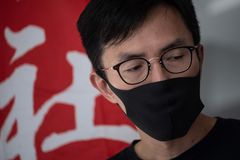