Samar Halarnkar is a journalist and editor of Indiaspend.org, a data journalism non-profit in India.

When a storm of protest broke in India last week over the rape and murder of an eight-year-old, the nation took itself by surprise. The child, a girl named Asifa Bano, was from a nomadic Muslim tribe in the restive, Muslim-majority Himalyan state of Jammu and Kashmir. Middle-class Indians – Hindu, Muslim, Christian and Sikh – who rarely take to the streets, poured out of their homes, lit candles and turned to social media to seek #JusticeforAsifa. Why they did this more than three months after the brutality became known is a comment on the dire state of India’s justice system and public morality.

The rape of children is not uncommon in India, where 1.3 billion people are squashed together in an area smaller than Quebec, Ontario and British Columbia combined. Fifty-four children are raped every day, and child rapes are increasing, according to the latest available national crime data. Many are infants, a substantial number murdered after being brutalized, their fates occasionally revealed as briefs tucked away on the inside pages of newspapers. In a country riven by 22 official languages, tens of sub-nationalities, castes and frequent religious strife, and united by a general apathy to death and suffering, these crimes rarely trouble the national or local conscience.

Adding to this, once regarded as reasonably efficient and independent, the justice system has been eviscerated over the years. Police officers who are not loyal to politicians often find career progress difficult, and investigations and courts are open to manipulation. As religious and ethnic strife further batters public and political morality, Indians do not expect much from their leaders, their police or themselves.

The protests and their aftermath renewed many debates in the world’s largest democracy: the safety of children, the injection of religion into politics and administration, the faltering justice system, the radicalization of Hindus, who make up 80 per cent of India’s population, and the deleterious effects of a vibrant fake-news industry. Above all, the girl’s gruesome death forced on the land of Mahatma Gandhi an enough-is-enough moment, forcing Indians to cast aside their differences and apathy and stand up for what was moral and just. When they did, politicians had little choice but to respond.

Asifa, the illiterate daughter of shepherds who migrate from the Himalayan foothills to high mountain meadows every summer, was abducted by a group of local Hindus when she went looking for the family’s horses. (The state of Jammu and Kashmir, which over all is predominantly Muslim, is divided into three regions: Jammu, which is predominantly Hindu; Kashmir, which, like the entire state, is predominantly Muslim; and Ladakh, which is predominantly Buddhist and Muslim.) Dragged to a temple in the woods – one of the suspects is the priest – she was gang-raped over days, drugged, beaten and her head finally smashed with a stone, according to a police report. Two of the eight suspects were police officers, accused of washing the child’s clothes to destroy forensic evidence.

The brutality was not unusual. A day after the protests, the body of an 11-year-old girl with 86 injuries was found in the western city of Surat, raped before being killed. A day later, at least six more children were raped.

Asifa’s death gained some local attention in Jammu and Kashmir more than a month ago, after some Hindus banded together as a new organization, the Hindu Unity Forum, and organized protest marches waving the national flag – to support the suspects.

The Forum – one of many Hindu fundamentalist organizations allied with India’s ruling Bharatiya Janata Party (BJP) – demanded a federal inquiry, implying a lack of faith in the investigation team because half the officers were Muslim. The protesters were urged on by two ministers of the state government, which is a coalition of a local Muslim party and the BJP, whose leader, Narendra Modi, is India’s Prime Minister. The ministers were from the BJP, which in elections won the province of Jammu, whose majority Hindu population has grown ever more distant from its northern Muslim cousins, many of whom are involved in violent rebellion against the Indian state.

Asifa’s death finally made national headlines when Hindu lawyers in the Jammu city of Kathua tried to stop police investigators from submitting their report to a reluctant judge, who only accepted it after superior judges intervened. Rarely before in India – a secular republic – has religion been the motivation for the rape of a child, and rarely before have religious affiliations been so nakedly deployed to impede an investigation. These were reactions too abnormal even in a country where, like so many others worldwide, majority sentiments have morphed into Hindu ultranationalism and turned against minorities, in particular India’s 200 million Muslims.

A group of retired, and usually reticent, Indian bureaucrats wrote to Mr. Modi, calling the rape and the attempt to undermine the justice system “India’s darkest hour” since independence from the British empire in 1947. “Prime Minister, we write to you not just to express our collective sense of shame and not just to give voice to our anguish or lament and mourn the death of our civilizational values – but to express our rage,” they said. “Rage over the agenda of division and hate your party and its innumerable, often untraceable offshoots that spring up from time to time, have insidiously introduced into the grammar of our politics, our social and cultural life and even our daily discourse… Given your supremacy within the party and the centralized control you … more than anyone else, have to be held responsible for this terrifying state of affairs.”

The ultranationalists found it difficult to weather the flood of revulsion. Even pro-Hindu and pro-government private television broadcasters – called “North Korean channels” because they doggedly peddle the state line – joined the demand for justice. After days of silence, the Prime Minister, an avid tweeter with 42 million followers, who usually ignores violence against Muslims, said, “Our daughters will definitely get justice.” He referred also to the rape of a teenager in another state, where local police stalled action against the suspect, a legislator from Mr. Modi’s party. The two BJP ministers who defended Asifa’s alleged rapists were then forced out of office. On television and Twitter, party spokespersons continued to defend the ministers, questioned national outrage and floated conspiracy theories. The assault on India’s moment of morality had begun.

As more details emerged from the police investigation, the larger motivation behind Asifa’s rape and murder was revealed: a plan to drive Muslim nomads from the Hindu enclave of Jammu. Ethnic cleansing is not new to Jammu and Kashmir. During an earlier phase of an Islamist insurgency in the 1990s, nearly half a million Hindus left Kashmir and many were killed. Some Hindus in Jammu are still keen on revenge, their hatred fueled by the renewed rebellion in Kashmir and a flood of fake images of Muslims killing Hindus.

Hindu radicalization is evident across India, as Mr. Modi’s BJP attempts to build a new make-India-great-again national narrative, spawned from a supposedly golden Hindu era that ended with Muslim invasions about 1,000 years ago. Websites and social-media posts reveal how many Hindus would like Muslims to either leave for Pakistan (which was carved out of India as a Muslim homeland) or stay on as second-class citizens. Photos of Turks at the Istanbul airport wearing – obviously photoshopped – T-shirts that read, “Women are not worthy as cows in India”, and “Beware in sending your females to India #JusticeforAsifa,” have gone viral, pushed by ultranationalists and some media as evidence of a global Islamist conspiracy against India.

The Hindu right is flooding social media with theories that attempt, once again, to undermine justice and morality: The postmortem found no evidence of rape; a Muslim investigator on the case previously murdered a man and raped his sister; Asifa’s parents were dead (they are not); the girl had a large inheritance. Compiled and published in an English-language newspaper, these allegations are being widely shared, including by many Twitter handles followed by the Prime Minister. A line at the bottom – ignored by radicalized handles, of course – says, “This article is a pure concoction based on fiction. Any resemblance with any character or event is unintentional and coincidental.”

India’s fledgling moment of morality may yet yield to the calumny of its social media. 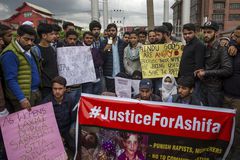