Suzie Dunn is a part-time professor and PhD student at the University of Ottawa, Faculty of Law.

In a unanimous decision by the Ontario Court of Appeal last week, R v Trinchi, the court affirmed taking screenshots of a consensual sexual video chat is a crime, if the person being recorded is unaware the screenshots are being taken.

Justice Juriansz’s decision is an important one in a time when romantic and sexual relationships are increasingly experienced in digital spaces via apps, text and video chat. Couples must negotiate what they agree to in both the physical and digital aspects of their relationship. While negotiations in physical spaces are familiar to most, the parameters for negotiating consent for digital content is something new to many.

In this case, a couple was in a long-distance relationship and stayed in contact via Skype. On multiple occasions the woman in the relationship would pose in the nude, believing her images were only being streamed to her partner but not recorded. All the while, she didn’t realize that her partner was secretly taking screenshots of her and saving copies of her naked images of her on his computer. Once their relationship ended, a series of these nude screenshots were e-mailed to some of her personal contacts.

A critical aspect of this decision was that the court recognized that simply because a person agrees to be viewed sexually in one context, such as by video chat, this does not mean that they agree to other forms of recordings they are not aware of. The difference in the type of image transmission is key in understanding whether a person has a reasonable expectation of privacy. By finding the screenshots to be both privacy invasive and taken clandestinely, this decision brings significant clarity to the nuances of privacy and digital recordings, particularly for intimate partners.

On appeal, the appellant argued that his girlfriend had voluntarily posed in the nude in front of a camera that she knew was transmitting her image and therefore did not have a reasonable expectation of privacy, as is required to prove the crime of voyeurism.

Following the recent Supreme Court decision in R v Jarvis, which requires the courts to look at a variety of factors when considering whether a person has a reasonable expectation of privacy, the Court of Appeal found that although the woman had exposed herself willingly on Skype to her partner, she still had a reasonable expectation that he would not record permanent images of her. The images she transmitted were intended to be fleeting. The court stated that she “was entitled to reasonably expect the appellant would not record their sexual activities in ‘virtual space’ without her consent.”

In making this decision, the court laudably avoided blaming the victim for her partner’s abusive behaviour. The appellant had tried to argue that because the couple had never explicitly agreed not to take screenshots of the video chat, and it is common knowledge that screenshots of the chat could be taken with a click of a button, she must have known she could be recorded at any time.

Arguments like these harken back to sexist ideas that if a woman doesn’t actively avoid all situations where she could be at risk for sexual abuse, she is at fault for her partner’s harmful behaviour.

Fortunately, the Court of Appeal disagreed. Justice Juriansz stated that intimate partners should not “exceed the parameters of what has been agreed to without obtaining consent. There is nothing contentious about this.”

Although consent is not an essential element in the voyeurism provision, it was a significant factor in the Court of Appeal’s decision. The language the court used emphasized how consent plays into appropriate online sexual interactions. We must start having conversations about respecting sexual integrity in digital spaces, and legal responses such as this build on the growing recognition that sexual boundaries must be respected in digital spaces as much as physical.

Opinion
The fight over tights: Why do women wear leggings?
Subscriber content
April 26, 2019 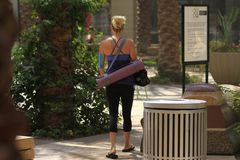 Opinion
For trans people in Ontario, the sex-ed debate feels like it’s about something else
April 30, 2019
Follow us on Twitter @globedebate Opens in a new window
Report an error
Due to technical reasons, we have temporarily removed commenting from our articles. We hope to have this fixed soon. Thank you for your patience. If you are looking to give feedback on our new site, please send it along to feedback@globeandmail.com. If you want to write a letter to the editor, please forward to letters@globeandmail.com.
Comments