Apr. 20 was a day marked by sharp contrasts in judicial verdicts relating to harm.

In Quebec Superior Court, Justice Marc-Andre Blanchard issued a ruling regarding Bill 21, Quebec’s “secularism” law, which bans the wearing of religious symbols for government employees deemed to be in a position of authority, such as judges, government lawyers, teachers and police officers. New hires must remove religious symbols, while those already employed with the government can keep their symbols and jobs; they cannot, however, get promoted or transferred.

And so systemic discrimination have been enshrined in law, in a province whose premier repeatedly denies the existence of systemic racism.

In contrast, we witnessed accountability for cruel behaviour in a Minnesota courtroom. There, a 12-member jury found former police officer Derek Chauvin guilty on three counts in the death of George Floyd. The sheer inhumanity of Mr. Chauvin’s actions – namely, kneeling on the neck of Mr. Floyd while he was prone, handcuffed and pleading for his life – was broadcast for all to see. Mr. Chauvin was held accountable for his actions, and now awaits sentencing for the three charges of which he has been found guilty. Elation was tempered with the knowledge that the fight against police brutality and systemic racism is far from over. U.S. President Joe Biden acknowledged as much, calling systemic racism “a stain on our nation’s soul.”

A life, to be sure, has not been snuffed out by Bill 21. But livelihoods are being waylaid all the same by systemic discrimination.

While Justice Blanchard affirmed the bulk of Quebec’s law, he struck down portions that applied to English school boards and the wearing of face coverings in the National Assembly. He also had harsh words for the bill: “There is no doubt that in this case the denial by Bill 21 of the rights guaranteed by the Charter has severe consequences for the persons concerned. Not only do these people feel ostracized and partially excluded from the Quebec public service, but in addition, some see their dreams become impossible while others find themselves stuck in their positions with no possibility of advancement or mobility. In addition, Bill 21 also sends the message to minority students wearing religious symbols that they must occupy a different place in society and that obviously the way of public education – at the level of preschool, primary and secondary – does not exist for them. On the other hand, the beneficial effects appear at least tenuous.”

Quebecers aspiring to one of these jobs now face a dilemma, Justice Blanchard added: “Either they act according to their soul and conscience – in this case their beliefs – or they work in the profession of their choice. It is easy to understand that this is a cruel consequence which dehumanizes those targeted.”

Nonetheless, such cruel dehumanization is legal because of the province’s deployment of the Charter’s notwithstanding clause.

Meanwhile, Quebec Justice Minister Simon Jolin-Barrette, the law’s architect, will appeal the ruling, stating, “There are not two Quebecs – there is only one.” This is rich coming from a man who has himself created two Quebecs: One where opportunity is available for all, and another where opportunities are limited because of a person’s religious belief and expression.

Let’s not forget that the majority of Quebeckers approve of Bill 21 – cruelty, dehumanization and systemic discrimination be damned. Is it any wonder that Quebec has been facing a shortage of teachers? Lost is the irony that today everyone must cover their face in government institutions, including in the National Assembly.

Federal leaders, conscious of the significant number of seats in Quebec, have reacted along differing lines. Green Party Leader Annamie Paul and NDP Leader Jagmeet Singh have each unequivocally opposed the law, while the Conservatives have thrown Quebec’s religious minorities under the bus, stating they will not challenge the law but assuring Canadians that they would never introduce a federal version of Bill 21. Prime Minister Justin Trudeau has been non-committal about intervening.

We must now take inspiration from the U.S., where activists have pushed for justice for Black lives and are now opposing new laws in Georgia that will affect voters of colour. We must publicize the systemic discrimination, dehumanization and cruelty of Bill 21 far and wide, and confer with activists about the best way forward to address discrimination enshrined in law.

Let Quebec explain Bill 21 to the world. After all, those who aspire to a more just society should remember the words of Martin Luther King Jr.: “The arc of the moral universe is long, but it bends toward justice.” It does not bend on its own. 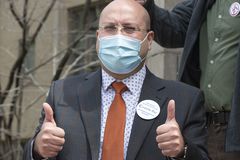 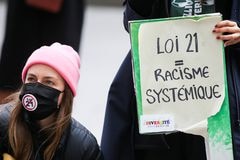 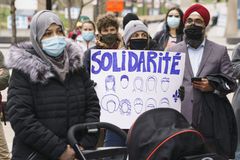