Shawn Ahmed is a queer, Bangladeshi-Canadian Muslim activist who has been honoured by both the World Economic Forum and the Webby Awards.

Much like the Toronto Pride Parade last month, the Vancouver Pride Parade will be free of police marching in uniform. Whether or not you believe police deserve to march in Pride, we should at least all agree that there are issues regarding policing that need to be addressed. There are too many within the LGBTQ community who do not feel safe near police, who believe the police unfairly target and discriminate against minorities, and who are outraged at the seemingly lackadaisical police response to murdered and missing gay men in Toronto’s Gay Village – alleged victims of accused serial killer Bruce McArthur.

The problem is that banning police from marching in Pride is not meant to be a conversation starter on how to reform the police. Rather, it is part of a movement that wants to abolish the police altogether. This movement is part and parcel of the force that worked to get police kicked out of Pride in the first place. Some within the police abolition movement call it “restorative justice” or “transformative justice." Whatever the label, the demands are the same: Police, prisons and law enforcement as we know them must be abolished. These demands are paired with the belief that socialized housing, universal mental health care, community self-policing and guaranteed income can replace the role of police and prisons.

I’ll admit some of the ideas espoused by the transformative justice movement make sense. As someone who is alive because police intervened in my suicide attempt, I empathize with the demand for universal mental health care. However, the recent Danforth Avenue shooting in Toronto that left two people dead and more than a dozen injured is a painful reminder that therapy and medication cannot stop someone from killing.

As a victim of same-sex abuse, I’m no stranger to the fact that the police can let us down. However, some abusers are so deeply embedded and so highly esteemed within our community that turning to police is the only chance to be believed for many of us. As a gay brown Muslim from a family that fled to Canada, I’m also keenly aware that “community self-policing” can often devolve into rule by either gangs or religious zealots.

Ironically, despite all the diversity within the LGBTQ community, when it comes to the police abolition movement, it’s all binary: You’re either with them or against them. To praise the police means you are colluding with the “oppressor” and are racist, anti-black and privileged. Positive interactions with the police – even ones wherein police save lives and de-escalate conflicts (such as the response to the Toronto van attack in April) – are dismissed as being solely attributable to an individual officer’s innate human goodness. Conversely, every bad cop is proof that the whole institution must be torn down. There is no middle ground.

But, as with all things, the truth lies somewhere in the middle. Unfortunately, no one in favour of banning the police from marching in Pride is creating this middle ground. In a wink-wink nudge-nudge to the police abolition movement, in the more than two years since Toronto police have been barred from officially marching in the Toronto Pride Parade, neither Pride Toronto nor any of our community’s leaders have offered concrete steps by which the police could work toward being deemed worthy to march with us once again. Indeed, any potential goalpost – no matter how ambitious a reform – would likely infuriate the police abolition movement. It’s no wonder that even the offer by Vancouver Pride (similar to the one offered by Pride Toronto) that allows police officers to march in Pride this year – without police uniforms or police cars and only alongside other City of Vancouver employees – is being met with more protests. It’s a recipe that keeps police out of Pride forever. As intended.

Last month in Toronto, I watched police abolitionists march down the streets of Toronto. They did so by marching along streets guarded by police with barricades designed to stop another van attack from happening. They chanted for the abolition of police and prisons unimpeded because the anti-LGBTQ bigots on the sidelines were kept in check by police. They did so all while abusers were curtailed with police reporting at least one arrest for sexual assault. All this while the police meticulously and painstakingly exhume and analyze a seemingly unending amount of body parts – all to ensure that an serial killer is put behind bars, if convicted.

At Vancouver Pride, similar protests with similar chants will be no doubt be happening. But, until our community can at least agree that the police need to exist, we will never truly be safe. 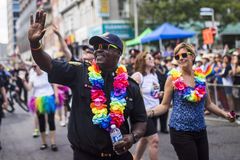 Pride Toronto should lose public funds if it upholds police ban
March 28, 2017
Pride Toronto hires its first black female executive director
February 17, 2017
Follow us on Twitter @globedebate Opens in a new window
Report an error
Due to technical reasons, we have temporarily removed commenting from our articles. We hope to have this fixed soon. Thank you for your patience. If you are looking to give feedback on our new site, please send it along to feedback@globeandmail.com. If you want to write a letter to the editor, please forward to letters@globeandmail.com.
Comments