As a former journalist in the Philippines, I was deeply angered and saddened when Maria Ressa, the founder of the crusading journalism outlet Rappler, and Reynaldo Santos Jr., a former writer there, were sentenced on Monday to up to six years in prison. But I was not surprised.

It was clear from the start that the case against them – a libel suit over the depiction of a wealthy businessman five years ago – was part of President Rodrigo Duterte’s war of attrition against the independent reportage of Rappler and against all media and activists who dare criticize him. The impact of this assault on the press will be far-reaching. Critical reporting – the kind that once made the Philippines a model of exemplary journalism in Southeastern Asia – will suffer.

Since Mr. Duterte took office in 2016, the press had served as a counterpoint to his government’s many abuses, mainly the violence and deaths in his so-called “war on drugs.” Now, the diminution of the media’s checks and balances against his increasingly authoritarian, rights-abusing ways will only accelerate.

Other journalists will likely think twice about reporting on issues the Duterte administration does not like. The President already showed how far he’s prepared to go to stifle critical media voices: In May, his government declined to renew the broadcast licence of ABS-CBN, the Philippines’ largest broadcast network, which had also reported critically about the “drug war” killings.

The Duterte administration has also broadly been adopting authoritarian measures. Any day now, the President will sign a counterterrorism bill into law that will allow warrantless arrests and weeks of detention without charges.

No one can be certain what set off Mr. Duterte’s campaign against Rappler. An upstart in the industry, it was only three years old when he ran for president. But Rappler was becoming increasingly popular, publishing explosive and impressive accounts of the rights abuses and the criminal manner in which the police were conducting the “drug war.” Rappler helped blow the lid off the lie that those killed during police operations had fought back instead of being summarily executed. Its award-winning reportage provided graphic, excruciating accounts of the violence that befell slum communities in Manila.

So it was only a matter of time before Mr. Duterte and his government began a campaign to destroy the website. The President singled out Rappler for pointed criticism during his State of the Nation speech in 2017. And this libel case – fraught as it was with absurd legal infirmities – is just one of the 11 cases and investigations it faces.

Rappler’s coverage was driven by professionalism and that poses a problem for Mr. Duterte. Any journalist worth their salt would inevitably discover the many skeletons in his closet. Rappler did not even have to rummage through it: During the presidential election, Mr. Duterte himself boasted about launching a campaign of extrajudicial killings, vowing to order the deaths of criminals just as he did in Davao City, where he was mayor for more than two decades. While many in the Philippine media covered the “drug war” meaningfully, especially early on, Rappler stood out for following every lead and refusing to let go of the story.

Rappler’s coverage had one consistent theme: Those responsible should be held accountable for the violence and wrongful deaths. This echoed similar stands by the United Nations, the International Criminal Court and domestic and international rights groups.

Mr. Duterte has previously demonstrated his aversion to accountability with his treatment of Senator Leila de Lima, the former chair of the Commission on Human Rights. When she dared to investigate the alleged death squads in Davao City, as well as the early days of the “drug war” killings, Mr. Duterte saw to it that Ms. de Lima suffered personally and politically. She has spent more than three years in police detention since her arrest in February, 2017, on dubious drug charges.

Mr. Duterte has weaponized the law against his critics, marshalled his supporters on social media to act as a mob against them, exploited his control of the legislature and tapped into his popularity to enforce policies that blatantly violate the rights and civil liberties of Filipinos. Justice will only come for his victims if rights-minded governments such as Canada, key member states of the European Union and others press for accountability, starting at the UN Human Rights Council that convenes this month.

What happened to the journalists at Rappler is just the beginning. There’s no time to waste. 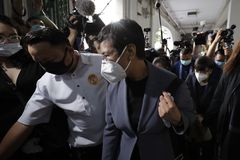