The surprising thing about Sunday’s Turkish election was not that President Recep Tayyip Erdogan managed to maintain an increasingly rigid hold on power. After six electoral victories in 16 years, after staging a 2017 referendum to turn the presidency into an all-controlling executive, after brutally crushing a 2016 coup attempt and imprisoning or banning thousands of critical politicians and journalists, there was little doubt he would find a path to victory.

What was surprising was that so many Turks resisted Mr. Erdogan’s efforts to manipulate democracy in his favour. In spite of his near-silencing of opposition, almost half of Turkish voters who were able to cast a legal ballot voted against Mr. Erdogan and his party.

These efforts, combined with the fact most independent Turkish media outlets have been shut down or banned, should have added up to a far more decisive victory.

After scrupulously following the playbook of Russia’s Vladimir Putin and Hungary’s Viktor Orban in creating a pathway to the type of authoritarian rule politely known as “managed democracy,” Mr. Erdogan still faces obstacles from the Turkish people.

While he claimed victory late on Sunday night, first in a news conference and then in a raucous Ankara balcony speech in the early hours, his presidential victory was slim enough that neither opposition parties nor the electoral board acknowledged it until early Monday morning.

And while his Justice and Development Party (AKP) appeared to share a parliamentary majority in a coalition with the far-right, anti-Europe Nationalist Movement Party (MHP), he failed to produce a result that would strip a crucial opposition party, the Kurdish-dominated People’s Democratic Party (HDP), of official party status by reducing it to less than 10 per cent of seats.

And Turkey’s long-standing secular opposition, the Republican People’s Party, saw significant gains in seats after its new leader, Muharrem Ince, ran a campaign that criticized Mr. Erdogan’s failure to negotiate an end to the Syrian civil war and his supposed ties to Israel.

Everything about this election was engineered by Mr. Erdogan to prevent opposition parties, whether secular or Kurdish, from challenging his party’s majority or even gaining an official place in parliament. The vote was supposed to have been on Nov. 3, 2019, under the new electoral laws put in place after the referendum; he announced the snap election on April 18, breaking his own law and catching the opposition off guard.

That would allow Mr. Erdogan, almost two years early, to become a powerful “executive president” under postreferendum rules, with the power to directly appoint cabinet ministers, judges and senior officials without parliamentary oversight.

In this election, even more than in previous votes, Mr. Erdogan tried to build his AKP into an unstoppable, single-party regime by driving a wedge between ethnic Turkish voters and Kurds, who are about a fifth of Turkish citizens.

During his first decade in power, Mr. Erdogan had supported Kurdish causes, and legalized the Kurdish alphabet, school system and parties such as the HDP. But after his shift to more authoritarian ambitions at the beginning of this decade, he began demonizing and disenfranchising Kurds.

Sunday’s vote, which took place after Mr. Erdogan had waged several years of all-out war against Kurdish rebel forces in Syria and in southeastern Turkey, was built on a fear campaign directed against Kurdish parties and organized efforts to prevent Kurds from voting.

In early June, Mr. Erdogan was caught telling party constituency officers, in a video accidentally placed online by a supporter, to attempt to quash the Kurdish vote: “I can’t speak these words outside. … If the HDP falls below the election threshold it would mean that we would be in a much better place. … You know who is who. You will take the voter lists for each ballot box and conduct special work.” He told them to ensure AKP majorities on ballot-box monitoring committees.

Electoral districts in Kurdish-majority regions were reorganized to reduce the number of polling stations. One of the HDP’s leaders was arrested and imprisoned on questionable “terrorist propaganda” charges. Hundreds of Kurdish candidates were arrested, confined and in some cases imprisoned, and international organizations reported voting irregularities in many Kurdish-majority areas.

Given this overwhelming effort to silence opposition and punish criticism, what stood out about Sunday’s vote was the robust persistence of Turkish dissent in its darkest hour. Mr. Erdogan may have won himself half a decade of near-total rule, but he has failed to force his country to speak with one voice. 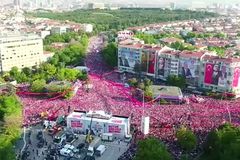