Brahma Chellaney is professor of strategic studies at the New Delhi-based Center for Policy Research and Fellow at the Robert Bosch Academy in Berlin, and the author of nine books, including Asian Juggernaut, Water: Asia’s New Battleground, and Water, Peace, and War: Confronting the Global Water Crisis.

For more than two years, China has waged a campaign of unparalleled repression against its Islamic minorities, incarcerating an estimated one-sixth of the adult Muslim population of the Xinjiang region at one point or another. Yet, with the exception of a recent tweet from U.S. Secretary of State Mike Pompeo calling on China to “end its repression,” the international community has remained largely mute.

In its reliance on mass detention, the Communist Party of China (CPC) has followed the Soviet Union’s example. But, China’s concentration camps and detention centres are far larger and more technologically advanced than their Soviet precursors, and their purpose is to indoctrinate not just political dissidents, but an entire community of faith.

Although independent researchers and human-rights groups have raised awareness of practices such as force-feeding Muslims alcohol and pork, the Chinese authorities have been able to continue their assault on Islam with impunity. Even as China’s security agencies pursue Uyghurs and other Muslims as far afield as Turkey, Chinese leaders and companies involved in the persecution have not faced international sanctions or incurred any other costs.

Chief among the culprits, of course, is Chinese President Xi Jinping, who in 2014 ordered the policy change that set the stage for today’s repression of ethnic Uyghurs, Kazakhs, Kyrgyz, Hui, and members of other Muslim groups. The forcible assimilation of Muslims into the country’s dominant Han culture is apparently a cornerstone of Xiism – or “Xi Jinping Thought” – the grand “ism” that Mr. Xi has introduced to overshadow the influence of Marxism and Maoism in China.

To oversee this large-scale deprogramming of Islamic identities, Mr. Xi, who has amassed more power than any Chinese leader since Mao Zedong, reassigned the notorious CPC enforcer Chen Quanguo from Tibet to Xinjiang and elevated him to the all-powerful Politburo. Though Mr. Chen’s record of overseeing human-rights abuses is well-known, the Trump administration has yet to act on a bipartisan commission’s 2018 recommendation that he and other Chinese officials managing the gulag policy be sanctioned. In general, financial and trade interests, not to mention the threat of Chinese retribution, have deterred most countries from condemning China’s anti-Muslim policies.

With the exception of Turkey, even predominantly Muslim countries that were quick to condemn Myanmar for its treatment of Rohingya Muslims, have remained conspicuously silent on China. While Pakistan’s military-backed Prime Minister Imran Khan has feigned ignorance about the Xinjiang crackdown, Saudi Arabia’s powerful Crown Prince, Mohammed bin Salman, has gone so far as to defend China’s right to police “terrorism.”

Emboldened by the muted international response, China has stepped up its drive to Sinicize Xinjiang by demolishing Muslim neighborhoods. In Urumqi and other cities, once-bustling Uyghur districts have been replaced with heavily policed zones purged of Islamic culture.

The irony is that while China justifies its “reeducation hospitals” as necessary to cleanse Muslim minds at home of extremist thoughts, it is effectively supporting Islamist terrorism abroad. For example, China has repeatedly blocked UN sanctions against Masood Azhar, the head of the Pakistan-based, UN-designated terrorist group responsible for carrying out serial attacks in India, including on Parliament and, most recently, on a paramilitary police convoy. As Mr. Pompeo tweeted, “The world cannot afford China’s shameful hypocrisy toward Muslims. On one hand, China abuses more than a million Muslims at home, but on the other it protects violent Islamic terrorist groups from sanctions at the UN.”

An added irony is that while China still harps on its “century of humiliation” at the hands of foreign imperial powers, it has for decades presided over the mass humiliation of minorities in Xinjiang and Tibet. Ominously, by systematically degrading Muslim populations, it could be inspiring white supremacists and other Islamaphobes around the world. For example, the Australian extremist arrested for the recent twin mosque massacres in Christchurch, New Zealand, declared an affinity for China’s political and social values.

There has been a good deal of reporting about how China has turned Xinjiang into a laboratory for Mr. Xi’s Orwellian surveillance ambitions. Less known is how Mr. Xi’s trillion-dollar Belt and Road Initiative is being used as a catalyst for the crackdown. According to Chinese authorities, the establishment of a surveillance state is necessary to prevent unrest in the province at the heart of the BRI’s overland route.

Like Marxism-Leninism, Nazism, Stalinism, and Maoism, which left millions of people dead, Xiism promises to impose significant long-term costs on untold numbers of innocent people. It is the impetus behind China’s ruthless targeting of minority cultures and communities, as well as its aggressive expansion into international waters and introduction of digital totalitarianism.

Thanks to Xiism, the world’s largest, strongest, and oldest autocracy finds itself at a crossroads. As the People’s Republic of China approaches its 70th birthday, its economy is slowing amid escalating capital flight, trade disruptions, and the emigration of wealthy Chinese. The Chinese technology champion Huawei’s international travails augur difficult times ahead.

The last thing China needs right now is more enemies. Yet, Mr. Xi has used his unbridled power to expand China’s global footprint and lay bare his imperial ambitions. His repression of Muslim minorities may or may not lead to international action against China. But it will almost certainly spawn a new generation of Islamist terrorists, compounding China’s internal-security challenges. China’s domestic security budget is already larger than its bloated defence budget, which makes it second only to the United States in terms of military spending.

The Soviet Union once held the same position – until it collapsed.

Opinion
How the terrorist threat from Pakistan can be quelled
March 1, 2019

Opinion
China is at a crossroads
January 2, 2019 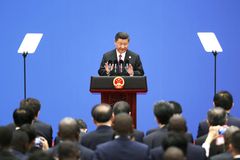