Ebola is a terrifying disease. It is easily transmissible through bodily fluids, astonishingly contagious, and it is fatal in 90 per cent of cases. Two vaccines exist, but quantities are inadequate. And ever since the World Health Organization first declared an Ebola outbreak in the eastern Democratic Republic of the Congo in August, 2018, more than 2,000 cases of Ebola have been reported. More than 1,000 people have died.

But in the eastern DRC, misinformation and disinformation about the disease circulates widely. Many believe Ebola is a gros mensonge – a big lie – dreamed up by Western humanitarians to sterilize Congolese women and kill their children while raising money for themselves. If this sounds outlandish, one must consider the brutal history of mistreatment of locals by outsiders in the DRC. Ten million Congolese people died at the hands of the Belgians in the late 19th century, while the Belgian treasury drew half its revenues from the Congo. In this light, the Congolese reaction makes more sense.

Papy Mahamba was one of many journalists working to clarify truth from fiction, working for a community radio station in Lwemba, Ituri province, in the heart of the eastern DRC. The cost of that work was his life.

On the evening of Nov. 2, Mr. Mahamba was broadcasting a report about Ebola from his house when men with machetes rushed the building. They killed him and injured his wife, then burned the house to the ground. Mr. Mahamba’s tragic death underscores the challenge that those fighting Ebola face, in a conflict environment overwhelmed by falsehood and fear.

While the humanitarian response has been swift, militias are now actively confounding efforts to enter the interior and set up rural clinics to vaccinate the healthy while healing the sick. Aid workers have been attacked and clinics set ablaze. On Dec. 4, Médecins sans frontières, or Doctors Without Borders, even took the unusual step of pulling its team back from the effort to contain Ebola in the Biakato region and in Ituri province, citing security concerns.

And health workers are concerned that if attacks motivated by misinformation about the disease continue, it is likely that Ebola will jump the border. The likeliest host is South Sudan, which is currently staggering under the triple impact of continuing conflict, the worst flooding in years and acute food insecurity; it is radically ill-equipped to deal with a virulent epidemic.

The killing of a journalist whose only “crime” was his attempt to clarify fact from innuendo about the disease takes the current Ebola crisis into a whole new realm – that of an attack on the right to information. In this case, Mr. Mahamba was sharing critically important information about an epidemic – information that has the power to save lives, or condemn them.

I know firsthand that truth can be a solution: Mustapha Dumbuya and Kolubah Akoi, reporters trained by Journalists for Human Rights (JHR), which I run, were a key part of the battle to contain and then end Ebola in Liberia and Sierra Leone in 2014-15 by working around the clock for months to ensure that people in the community knew how to separate fact from myth and how to care for the living and their dead.

JHR has been working with a network of reporters across the eastern DRC, training reporters on how to clarify myth from facts on Ebola. Mr. Mahamba was not among JHR’s cohort of trainees, but Prince Murhula, JHR’s partner in the region, is determined the effort should continue, and that Mr. Mahamba’s death will not be in vain.

Mr. Murhula recently issued a call to action via a local network, Journalistes pour la promotion de la démocratie et des droits humains, condemning the death, and called on local and international authorities to find, prosecute and punish those responsible. Further, he has exhorted authorities to do more to protect journalists engaged in the critical work of combating misinformation on this deadly disease.

Mr. Mahamba’s death is so significant because if such incidents go unreported and unpunished, the militias sowing disinformation and chaos about Ebola for their own confused ends will win the information wars. This exacerbates the danger for health workers and people at large, especially as the mistrust that is sown leads people to refuse to participate in the implementation of a vaccination effort.

Meanwhile, Congolese people continue to die in escalating numbers. In such conditions, it is on all of us to support and protect those brave journalists in eastern DRC who are continuing the work that Mr. Mahamba attempted to do. Without action, the spread of Ebola beyond Congo’s borders is only a matter of time.

Half a million Ebola vaccine doses to be stockpiled for emergency use
December 5, 2019 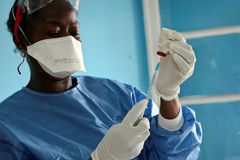 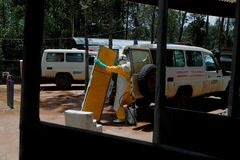 At least four Ebola response workers killed in rebel attack in eastern Congo
November 28, 2019
Follow us on Twitter @globedebate Opens in a new window
Report an error Editorial code of conduct
Due to technical reasons, we have temporarily removed commenting from our articles. We hope to have this fixed soon. Thank you for your patience. If you are looking to give feedback on our new site, please send it along to feedback@globeandmail.com. If you want to write a letter to the editor, please forward to letters@globeandmail.com.
Comments