Glynis Ratcliffe is the senior writer at Broadview magazine. Her work has appeared in The Washington Post, Chatelaine and The Walrus.

Years after my grandfather’s death, I discovered he was a writer. My family found a yellowed manuscript in the basement of his old home, and in it was a narrative of a part of his life we barely knew: his escape from Nazi Germany, and his subsequent internment as an enemy alien of Britain.

When Neville Chamberlain declared war with Germany in 1939, he also announced that any Germans or Austrians on British soil should be treated as a potential security threat – even if they were Jewish. Thousands were rounded up and held in camps across England. And then, when the British army determined those camps might draw too much attention from the Nazis as they flew overhead, the government decided to load up ships with these “enemy aliens,” and they were sent to both Australia and Canada, where camps awaited them in New Brunswick, parts of Quebec, and Ontario. One such ship – the SS Arandora Star – was sunk by a German U-boat before it even left.

And so it was that just when he thought his plight was over, my grandfather found himself detained yet again – this time, in Canada.

“Our hearts sank," he wrote in that draft, "when we sighted a large clearing of unfinished military huts in the middle of nowhere, surrounded by barbed wire fencing and four square watch towers with machine guns, floodlighted and with armed sentries walking up and down.”

This seems hard to square with Canada’s national mythology. Diversity, we’re told, is our strength; we’re kinder, more generous, more open-hearted. The latest such reminder came this week, when U.S. President Donald Trump told a group of Democratic congresswomen of colour to “go back” to the places “from which they came.” Amid that racist rhetoric and his government’s policies to erect detention camps for asylum seekers trying to get into the United States through its southern border, Prime Minister Justin Trudeau told reporters in Petawawa, Ont., that this wasn’t our way. “That’s not how we do things in Canada,” he said. “A Canadian is a Canadian is a Canadian.”

Fair enough: Our political leaders aren’t explicitly telling elected officials and citizens to “go home.” But we should be wary of getting on a high horse. Even beyond Canada’s reprehensible legacy of Japanese internment camps, the Second World War was also marked by a system of lesser-known Canadian internment camps in which innocents, trying to flee persecution in Europe, were detained. In some of these camps, Jewish refugees were held alongside prisoners-of-war, some of whom were the very Nazis who had forced them to flee their homes. Guards could sometimes display anti-Semitic attitudes. Internees did hard labour for little to no pay.

It’s an underdiscussed legacy that my grandfather knew too well.

“In the same camp, serving us a welcome supper, were the captured soldiers and airmen of Adolf Hitler, shouting ‘Sieg Heil’ at us,” he wrote. “A slight confusion occurred when we made it clear to the commandant that if we were not separated from the Nazis immediately, bloody fighting would break out. He had no idea who we were and where our sympathies stood, nor had he expected civilians altogether.”

When he was eventually transferred to another camp, a converted railway-repair building in Sherbrooke, Que., the conditions were even worse. “When we entered the premises we took one good look and our hearts sank in frantic despair … we were not highfalutin lumbermen but prisoners, crushed humans in the palms of military might, ridiculous monkeys wandering over train tracks, eating in a soot-covered boiler room we called a dining hall.”

Ultimately, he was sponsored by a Canadian company willing to hire him, and so he was released from the camp before the end of the war. He wasn’t hurt or tortured. He met my grandmother soon after his release. Everyone lived happily ever after.

Except that when I read my grandfather’s words and I’m taken inside those camps, there’s an unquestionable bleakness in those men, himself included. He wrote of strange, compulsive behaviours developing in fellow internees. We simply cannot guess at the emotional or psychological fallout of what my grandfather described: "We forgot what the world looked like and the world forgot who we were, where we were hiding and why. We forgot what women looked like and how their voices sounded. While London was ablaze we sat in the middle of a forest in the wilderness of New Brunswick, in a world of our own, lonely, isolated and forgotten.” I can’t help wondering if the nightmares he suffered from for the rest of his life were, in part, due to his time there.

Like it or not, we’re living in a time of mass migration. Millions are being displaced because of war, violence, famine or climate change, and some countries are handling the influx of people more effectively than others. That’s causing the cycle of hate that ensnared my grandfather to accelerate again, at the highest levels of political power in the United States. But if we didn’t know any better, we wouldn’t know that this is happening in Canada, too.

We must know better. These camps – not to mention the detention of 8,000 men who considered themselves Canadian in the First World War, or the Mackenzie King government’s unofficial position that “none is too many” when it came to Jewish migrants – are overlooked in our country’s story, rarely taught as part of our curriculum.

We’re not immune; we’ve never been immune. And we will always risk repeating history if we do not acknowledge that fact.

Editor’s note: (July 22) A previous version of this story said Winston Churchill declared war on Germany in 1939; in fact, it was Neville Chamberlain. 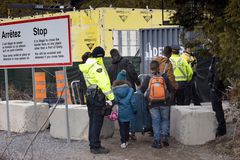 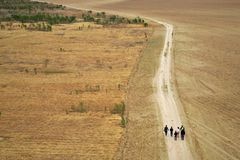