“Donald Trump does not represent Republican ideals. He is our Mussolini.”

So said a Republican Congressman, Utah Representative Chris Stewart, at the start of Mr. Trump’s presidency in March of 2017.

Around the same time, neoconservative Robert Kagan offered his view of the new President. “This is how fascism comes to America,” he said. “Not with jackboots and salutes … but with a television huckster, a phony billionaire, a textbook egomaniac ‘tapping into’ popular resentments and insecurities, and with an entire national political party – out of ambition or blind party loyalty, or simply out of fear – falling into line behind him.”

Such views depicting Mr. Trump’s authoritarian populism in fascist-styled terms didn’t find much currency back then. They felt hyperbolic.

That was then. A pertinent question is whether they are hyperbolic now.

Since being acquitted on impeachment charges, a vindictive Mr. Trump has embarked on an emboldened supreme-leader phase, unleashing a campaign of vengeance against opponents that is alarming even by his standards.

He has put his Justice Department on bended knee, intervening to protect political operative and friend Roger Stone – so much so that his declarations have prompted all four prosecutors involved to resign in protest. Even his usually pliant Attorney-General Bill Barr finally showed enough nerve to challenge him, saying Mr. Trump was making it “impossible” for him to do his job.

The beating-down of the Justice Department followed Mr. Trump’s refusal to allow White House officials to testify at the Senate impeachment trial, as well as his withholding of documents – turning the court procedure into something closer to a show trial.

Mr. Trump then purged his National Security Council, dismissing dozens suspected of not kowtowing to his every utterance. Impeachment witness Alexander Vindman (and his brother) was frogmarched out of the White House because of his testimony against the President; Mr. Trump’s European Union ambassador, Gordon Sondland, was fired for the same reason.

If he didn’t before, Mr. Trump now appears to see himself as untouchable, unaccountable and the source of all authority. He has been told that Article II of the Constitution grants him unlimited powers. It seems he believes it.

In the fashion of fascist leaders, his speeches and rallies are increasingly acts of demagoguery and self-aggrandizement. Patriotism is less about devotion to the country than devotion to him.

At his State of the Union address, he awarded the Presidential Medal of Freedom to a xenophobe, the race-baiting Rush Limbaugh. In the manner of authoritarian leaders, he fully funds and embraces the military. His immigration policies bolster white nationalism.

He endeavours to hollow out America’s system of checks and balances. Along with his efforts to put the Department of Justice under his thumb, he has turned the Senate into a rubber stamp and his Republican Party into an echo chamber.

While he does not control the media the way most despots do, his unrelenting attacks have undercut its credibility. His daily disinformation campaign has falsehoods streaming out at a frenzied rate, the bulk of them supported by a powerful media force, Fox News, and a political base that swallows his propaganda whole.

Supreme leaders surround themselves with lackeys, and Mr. Trump has done so at the White House, making his son-in-law Jared Kushner minister of everything and moving out others who sometimes challenged him.

Mr. Trump has increased his sway over the courts with a large number of ideological federal and district court appointments and two Supreme Court appointments. No president in recent memory has done more to change the judiciary. But as seen by his public criticisms of the prosecutors and the judge, Amy Berman Jackson, in the Roger Stone case, that isn’t enough. He demands more authority.

All the brazen anti-democratic displays might normally prompt public outrage. Not so with this President. The bounteous state of the economy dilutes opposition. The tribal nature of American politics prevents big shifts in public opinion. His Republican Party won’t challenge him, given his power to destroy dissenters.

Mr. Barr’s rebuke was remarkable, but it won’t slow him down. While the impeachment process humbled Bill Clinton, it has only goaded Mr. Trump, further detonating his authoritarian impulses.

He has been shown to side with autocrats, and the likely reason is that he wants to be one. Fascism lacks a universal definition. It comes in many forms. Mr. Trump is not, as per Mr. Stewart – who has become a Trump sycophant – another Mussolini. In America’s checks-and-balances system, some sinew does remain.

But given the trajectory he is on, given the degree to which he has imposed his dictate, and given his cult of personality, Donald Trump invites comparisons. 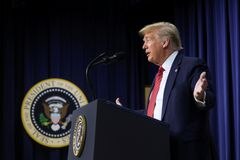 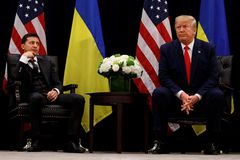 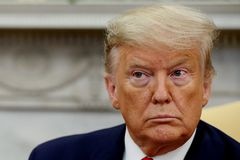