Is this the beginning of the end for Donald Trump? Hopped-up Trumpophobes devoutly hope so. After the devastating one-two punch he got on Tuesday, plenty of pundits are predicting that impeachment proceedings can’t be far behind. “The darkest day for the presidency since Watergate,” panted NBC News. “The current campaign finance crimes on display are more than enough to meet the definition of high crimes and misdemeanors,” wrote Richard Wolffe in the Guardian. “Can he survive?” asked E.J. Dionne in the Washington Post.

I am sorry to say that the real (not wishful) answer to that question is: Of course he can. Mr. Trump has not been nearly as damaged as people seem to think. And despite the fact that he is obviously unfit for office, impeachment is a fever dream that his opposition ought to shake off as soon as possible.

So what’s the fallout from Tuesday’s news? Start with Paul Manafort, the President’s former campaign manager, who was convicted for financial fraud. The Washington Post called the Manafort conviction “a major if not complete victory for special counsel Robert S. Mueller.” But the charges against Mr. Manafort predate his time with Mr. Trump, and have nothing to do with the President at all.

By all accounts, Mr. Manafort is a sleazy guy. He committed tax evasion to the tune of millions of dollars, and lied to banks in order to get loans. But the biggest news is not what he was convicted of but what he wasn’t. Robert Mueller is after bigger fish than financial fraud. What he really wants is evidence that the Trump campaign colluded with the Russians to steal the 2016 election. Mr. Manafort’s trial didn’t bring him any closer to that tantalizing goal.

The real hope that Mr. Trump can be implicated in criminal offences is the plea bargain made by Michael Cohen, the President’s former personal lawyer and fixer. That’s what has Trump-hunters salivating. Mr. Cohen pleaded guilty to violating campaign finance laws by making illegal donations to the Trump campaign. These donations were hush money paid to two women to keep quiet about their (alleged) affairs with his client, Mr. Trump.

Illegal campaign financing is a high crime and misdemeanour, if you like. So that unofficially makes Mr. Trump (who reimbursed his lawyer for the payments) an unindicted co-conspirator. Or maybe not. It’s hard to say. Maybe you could argue that Mr. Trump’s actions in paying off his mistresses were felonious and deserving of impeachment, although to me that does seem like a bit of a stretch. Or maybe they were just the usual sleazy, ethically corrupt but not actually criminal behaviour that we’ve come to know and love.

In any event, it’s not clear what the grounds for impeachment might be, or whether paying a woman to keep quiet about an affair actually constitutes a campaign contribution. But never mind. As Mollie Hemingway writes at The Federalist, “The details for impeachment are unimportant since the real crime seems to have been winning the 2016 election.”

Some people are trying to argue that Mistress-gate, if you will, is another Watergate – something that’s worth tearing America apart with another impeachment proceeding. But it’s not Watergate at all. Richard Nixon wasn’t paying off a stripper. He was covering up the burglary of his political opponents’ headquarters. A better comparison is the politically motivated Bill Clinton scandal, when the country lurched down the road to impeachment because the president lied about sex acts with an intern.

There’s another reason impeachment is a non-starter: the votes aren’t there. A vote to impeach requires a majority of the House, and a vote to convict requires a two-thirds majority of the Senate – a virtual impossibility, even if the Senate were to swing to the Democrats in November. On top of that, impeachment would make the current chaos in Washington look like a Sunday picnic. No one could wish it on the nation. As it is, impeachment talk only helps Mr. Trump by confirming his supporters’ belief that his enemies are out to get him.

So what we’ve really learned this week is that Mr. Trump has surrounded himself with a sleazy gang of grifters and con men, and ordinary Americans don’t care. And why should they? Far away from the fever dreams of Washington and New York, armies of deplorables are enjoying a housing boom and a remarkably sunny economy. The truth is that other than a coronary on the golf course, there really is no way Mr. Trump can be dislodged from office before 2020. Nor should we want him to be. The best way to take him out is to have the voters do it, in a fair and square election. That’s the way democracy is supposed to work.

Opinion
The descent of Rudy Giuliani is a mirror on all the madness
August 21, 2018 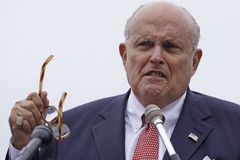 Opinion
For Paul Manafort, justice is finally served – but is it too late for America?
August 22, 2018

Opinion
The possibility of Trump’s impeachment is suddenly real
August 22, 2018 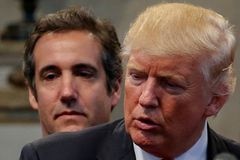