U.S. President Donald Trump is full of surprises, almost all of which are unpleasant. But if there is anything at all surprising about his nomination of Judge Brett Kavanaugh to the U.S. Supreme Court it is that the 53-year-old creature of the establishment is such a conventional choice. So conventional, in fact, it will be hard for moderate Democrats or Republicans to reject him no matter how much their consciences warn them otherwise.

No one but Judge Kavanaugh himself knows whether he is a stalking horse for the religious right, which has been waiting for this moment for three decades. The opportunity has finally come to establish a conservative majority on the court. Mr. Trump’s extensive consultations with social conservative leaders before naming Judge Kavanaugh suggest they are onside with his choice.

Yet, there is nothing in Judge Kavanaugh’s 12 years and roughly 300 decisions as a federal appeals court judge in the District of Columbia that could justify the outrage of left-wing Democrats for whom any Trump nominee would be unacceptable. It’s almost as if this former Republican operative wrote every one of those 300-odd decisions with an eye to the Senate confirmation hearings that he is about to undergo. Indeed, the most unsettling thing about Judge Kavanaugh may be just how politically savvy and calculating he has been throughout his legal career.

Though he would never have been appointed to the Supreme Court if Hillary Clinton had won the presidency – he was, after all, on the special prosecutor’s team that investigated Bill Clinton in 1998 – he would have been a logical choice for any Republican president.

If he has generally ruled against government regulation and taken an expansive view of presidential powers, he has shown deference to higher-court rulings, including Roe v. Wade, the seminal 1973 Supreme Court decision establishing a woman’s right to choose. How he would rule in abortion rights cases as a Supreme Court justice himself, however, is as clear as mud. Once seated on the top bench, he would be unbound by any previous court ruling.

The speech he gave after Mr. Trump introduced him to Americans on Monday night, during a live, prime-time announcement from the East Room of the White House, was as motherhood and apple pie as it gets. The former altar boy who now serves meals to the homeless and coaches his daughters’ basketball team at Blessed Sacrament School in northwest Washington worked in the White House under George W. Bush. But he was hired to teach law at Harvard University by none other than Supreme Court Justice Elena Kagan, a solid liberal appointed by Barack Obama.

Judge Kavanaugh spoke little of his own father but at length about his mother, a one-time high school teacher who got a law degree and practised her closing arguments at the dinner table. As a federal court judge, he boasted of hiring clerks from diverse backgrounds and mostly women.

Judge Kavanaugh may well be an originalist, believing that the U.S. Constitution should be interpreted as its 18th-century framers intended. But it will be harder to pin that label on him during his confirmation hearings than it was for Chief Justice John Roberts or the late Judge Antonin Scalia, both of whom were confirmed by large bipartisan majorities in the Senate.

If it’s true that U.S. politics is more polarized now, Democratic senators from states that Mr. Trump won in 2016 such as Heidi Heitkamp of North Dakota, Joe Donnelly of Indiana and Joe Manchin of West Virginia have no good reason to reject Judge Kavanaugh. Some political analysts argue that Judge Kavanaugh’s nomination won’t energize evangelical voters who had been hoping Mr. Trump would pick Judge Amy Coney Barrett, who could have been counted on to strike down Roe. But Judge Kavanaugh’s previous deference on that abortion rights ruling should also make it easier for moderate Republican Senators Susan Collins of Maine and Lisa Murkowski of Alaska to vote for him.

As Ms. Collins, who had said she could not vote to confirm a judge who was openly “hostile” to Roe, said on Tuesday: “It will be very difficult for anyone to argue he is not qualified.”

That doesn’t mean Roe v. Wade is safe – just that it will be hard for Judge Kavanaugh’s detractors to argue that it isn’t. Therein lies the genius of Mr. Trump’s choice. 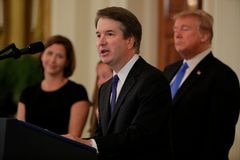 Who is Brett Kavanaugh? A look at Trump’s nominee for U.S. Supreme Court
July 9, 2018 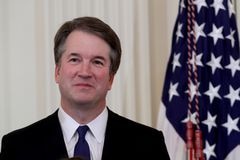