Rick Ekstein is a Toronto-based CEO who has travelled extensively on business in the Gulf and Middle East.

Twenty-five years ago, when I started doing business in the Persian Gulf, no one could have reasonably imagined the warming of relations now unfolding between Israel and a number of key regional players. The signs of progress may not make headlines, which are generally reserved for the worst news from the region, but they are important and clearly present, if you know where to look.

To cite just one example, analysts took notice of Air India’s historic announcement that it will operate a direct route between Tel Aviv and Delhi over Saudi airspace – an act that was previously denied by the Gulf state. Across the region, leaders once hostile to Israel are increasingly viewing Israelis as valuable trade, technology, and security partners.

It’s widely observed that these unlikely friendships are rooted in mutual concern toward Iran’s growing influence in the region, seen in the Shia theocracy’s massive expenditure of forces and funds in terror groups across the Middle East. Today, Iran’s aggressive agenda spans much of the map. The regime is bankrolling Hezbollah missiles in Lebanon and Hamas missiles in Gaza. It is arming a brutal insurgency in Yemen. It is building a permanent military presence in Syria, armed with advanced weaponry. This is to say nothing of Iran’s nuclear ambitions, which generate as much – if not more – fear in Riyadh and the Gulf as it does in Tel Aviv.

While the context may be one of regional anxiety, the resulting Israeli-Sunni co-operation offers optimism for those who seek an accord between Israel and its neighbours. It may yet foreshadow a comprehensive peace that Israelis have always sought – with mixed success – for their children.

Polling data over the years consistently shows most Israelis support significant concessions for the sake of an Israeli-Palestinian peace agreement. Since the state’s establishment – 70 years ago this spring – Israeli leaders have been willing to share the land with their Arab neighbours in two states for two peoples, as envisioned by the UN’s 1947 partition plan.

Since the Oslo Accords, Israelis have offered multiple far-reaching peace proposals, made major concessions, relinquished extensive tracts of land and withdrawn forces in an effort to enable progress towards peace. Tragically, the Palestinian leadership is wracked with dysfunction. Palestinians are currently split between a Gaza-based “government” under Hamas that rejects Israel’s very right to exist and a West Bank Palestinian Authority that has lost the confidence of its people and has boycotted negotiations for years.

I use the term “mixed success” because the failure of Palestinian leaders has not prevented exceptional progress with neighbouring Sunni states. The peace treaties Israel signed with both Egypt (1979) and Jordan (1994) prove that peace and co-operation are possible. These agreements survived the devastating effects of the Arab Spring, which engulfed the Middle East in chaos. They have also enabled Israelis to share their tremendous knowledge, technology, and resources (now including natural gas) with their neighbours – especially Jordan.

Indeed, a region wracked by socioeconomic, environmental, and security challenges needs more co-operation with innovators in Israel, the so-called “startup nation.” This sentiment is reflected in my personal experience. Many of the friends I made across the Arab world have always held Israel in great esteem and had no problems working with me, a Jewish businessman from Toronto and a strong supporter of Israel.

The Gulf states seem to be quietly recognizing that those who refuse to let go of bitter historic grievances are, tragically, captive to the past. Many Sunni government and business leaders understand that those who fantasize that Israel will disappear – the likes of Iran, Hezbollah, and Hamas – are as self-deluded as they are self-defeating. To the contrary, Israelis recognize that their future is inseparable from the future of the region, which is one reason why Israel is committed to the security, prosperity and progress of its neighbours.

Nothing is a given in the Middle East. As Israeli leaders – including current Prime Minister Benjamin Netanyahu – have repeatedly shown, historic rivals can mend old wounds and build a better future for the next generation. In the face of shared threats, there is a historic opportunity for Sunni leaders to forge a new relationship with Israelis. To build upon current momentum, regional players should urge the Palestinian leadership to end its boycott of negotiations with Israelis and seek a peace accord based on two states for two peoples.

Arab leaders call for probe into use of chemical weapons in Syria, condemn Iran
April 15, 2018 Strikes on Syria threaten a fragile peace in Lebanon
April 14, 2018 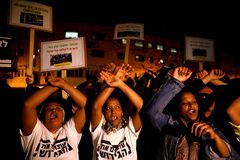