Colin Robertson is vice-president and fellow of the Canadian Global Affairs Institute.

If all politics in the United States is local, so is all trade. The pernicious renewal of tariffs on Canadian aluminum by President Donald Trump needs to be seen in this context: It’s less about Canada than it is about the approaching U.S. election.

Canadian aluminum provided a handy target for Mr. Trump to renew his “America First” pledge while visiting a Whirlpool plant in Clyde, Ohio, on Aug. 6. The Buckeye State is vital to his re-election.

For Mr. Trump, putting “American workers first” will mean reshoring supply chains in critical sectors, including electronics, machine tools, shipping, aerospace, automotives, iron and steel. Mr. Trump wants the U.S. to turn into the “premier medical manufacturer, pharmacy and drugstore of the world.” He promised to remedy every perceived trade violation, starting with placing aluminum tariffs on Canada for “taking advantage of us, as usual.” He forgets that our aluminum is helping American manufacturers recover from the COVID-19 shutdown.

Like other democracies, politics in the U.S. depend on assuaging local interests. Unlike other democracies, with strict curbs on election financing, the American system thrives on special interests, their lobbyists and their campaign contributions. When those interests coincide with those of a senior legislator, the system responds. One U.S. aluminum producer that had lobbied for the reinstatement of tariffs (Century Aluminum) has two smelting operations in Kentucky, the home state of Republican Senate Majority Leader Mitch McConnell. For Mr. McConnell, who is facing a tough re-election task, the tariffs are a slam dunk.

The tariffs underline, yet again, that our two-way trade relationship with the United States is asymmetrical: Three-quarters of our exports go to the U.S., but we account for only 18 per cent of U.S. export purchases. Mr. Trump understands and applies this leverage. (Mexico shares a similar asymmetry, another reason for Canada and Mexico to stick together.)

Canada’s “dollar-for-dollar” countermeasures are still to be defined. While they will undermine continental competitiveness and raise consumers’ costs, experience tells us they are necessary to galvanize the American counter-chorus to fight the Trump tariffs. That’s how the system works.

That we were able to negotiate a new continental accord is a testimony to a national effort involving premiers, legislators, business leaders and labour representatives. They were able to persuade U.S. stakeholders – including workers and consumers, and Democratic and Republican leaders at the state and national levels – that trade with Canada is mutually beneficial.

Our continuing trade advocacy must be a permanent Team Canada effort and applied consistently no matter which party leads our government. Our playbook must be pro-active as well as defensive.

Our renewed trade accord gives us a North American platform for resilient and dependable supply chains as well as a secure supply of energy, labour and innovation. We need to look to shared projects, starting with better infrastructure, to help reboot our economies. We also need better North America-wide preparation for the next catastrophe, whether caused by a pandemic, the climate, technology or terrorism.

We can hope for relief in November from the Trumpocalypse, to borrow the snappy title of David Frum’s new book. A Biden administration is likely to be more multilateralist. It would likely return to the Paris climate accord, resurrect arms control and be more sensible and considered in alliance management. Joe Biden intuitively understands that the U.S.-led collective alliance system is democracy’s greatest strategic asset.

Some things wouldn’t change under Mr. Biden, including the morphing Sino-U.S. “cold war.” Nor should we expect any endorsement of trade liberalization, although the United States may join the Trans-Pacific Partnership in an effort to constrain China.

If he loses the election, Mr. Trump’s bullying tone will go with him, but Mr. Biden will be just as determined in pressuring Canada to spend more for defence and security. The Trudeau government’s 2017 defence strategy, “Strong, Secure, Engaged,” is outdated. The Australians are revising and bolstering their security. So should we. This will mean more capability in the Arctic and more maritime capacity in the Indo-Pacific, where our efforts at trade diversification require freedom of navigation.

The world is meaner and messier. If we have learned anything from the Trump experience, it is that the U.S. is no longer prepared to, as John F. Kennedy said in his 1961 inaugural address, “pay any price, bear any burden, meet any hardship, support any friend, oppose any foe to assure the survival and success of liberty.”

Liberty matters just as much as when Kennedy made this promise. Liberty’s defence must now be a collective effort. And by standing up for our values, we are also providing insurance for our interests. 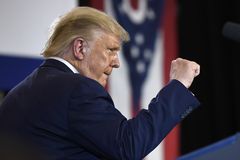 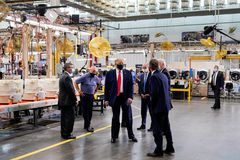