If there was a single pledge that stuck out as particularly ill-timed during Wednesday’s Throne Speech, it was the reiteration of the promise that the government will ban “harmful single-use plastics” in Canada next year. As if anyone outside of government was thinking about plastic straws getting stuck up sea turtles' noses at a time like this – a time when, if anything, single-use plastic is in high demand for use in personal protective equipment and ad hoc procedures to maintain good hygiene and sanitation.

That pledge, originally announced more than a year ago, is a holdover from a bygone period when the Liberals could boast about green initiatives without the looming clouds of double-digit unemployment, a $343-billion projected deficit, thousands of deaths and the threat of thousands more. Looking ahead to what will likely be a tough fall and winter, the government should have read the room and, at least for now, shelved the lectures about drinking straws.

That’s not to suggest that now is necessarily the wrong time to talk about green reform writ large, though. Several countries seized upon the relative stability of COVID-19 case numbers over the summer to unveil their bold climate recovery initiatives, recognizing the rare opportunity the pandemic has provided for something of a social and economic reset. In June, Germany unveiled its green stimulus plan, which includes an overhaul of consumer billing practices, a focus on “green hydrogen” and billions of dollars for electric-vehicle subsidies. South Korea’s “Green New Deal,” which focuses on job creation through advanced clean technologies and a phasing-out of coal, was announced about a month later. France, Britain and the European Union have also already committed billions of dollars to help drive a climate-focused recovery plan.

Prime Minister Justin Trudeau, however, likely waited too long to announce what was teased months ago as a big, bold green recovery for Canada. Indeed, the Throne Speech was read as many provinces had already entered into the second wave of the pandemic; announcing a transformative parade of lofty green promises would’ve been perceived as obtuse in light of the acute state of suffering and worsening COVID-19 case numbers.

Surely sensitive to that perception, the government’s much-hyped Throne Speech added up to a few sporadic and recycled promises: to plant more trees, to retrofit homes and buildings, to achieve net-zero emissions by 2050 and to release a plan, sometime later, to exceed Canada’s 2030 emissions targets. Oh, and the straws. It may be that Mr. Trudeau’s decision to prorogue Parliament until September to shut down a few committee investigations inadvertently killed his government’s grandest ambitions.

But there is still a case to be made for a climate-focused recovery – not in spite of this pandemic, but drawing specifically on the lessons learned from it to prepare for the next crisis.

Indeed, Canada was among the many countries caught flat-footed in response to what epidemiologists and public health experts said for decades was an inevitable crisis. We didn’t upkeep crucial stockpiles of supplies; we didn’t maintain a pandemic response system; we didn’t heed warnings about the vulnerabilities of our congregate living settings; and we didn’t have procedures in place to properly stem the flow of infected travellers into Canada from abroad. We ignored the warnings from the experts until it was too late, and we paid massively for it – both economically, and in lost lives.

So while this is a government that likes to situate its policy promises in the lofty space between big dreams and butterscotch candy, there is a down-to-earth, pragmatic and persuasive way for it to justify ramping up climate-change mitigation measures now: by reframing them around better planning. We need to try to mitigate seasons of hotter, longer and larger forest fires that threaten to destroy communities in British Columbia and Alberta. We need to redraw outdated flood maps (a project the federal government has indeed undertaken) or risk leaving Canadians literally underwater. We need to be cognizant of how changing temperatures and precipitation patterns can increase the incidence of waterborne pathogens and the spread of disease. We need to heed the warnings from experts before it is too late, or risk paying massively for it – both economically, and in lost lives.

Canadians are living through – and can therefore easily understand the consequences of – poor planning. The federal government would likely opt for different wording, for obvious reasons, but there’s arguably no better time to emphasize the importance of disaster preparedness than in the midst of a disaster.

That is, as long as it’s about issues more immediately consequential than the nostrils of beleaguered sea turtles. 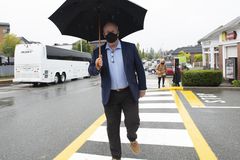