Stephen Saideman is the Paterson Chair in International Affairs at Carleton University and co-host of the Battle Rhythm podcast.

Harjit Sajjan is one of the longest-serving ministers of national defence in Canadian history. The most striking element of his testimony Friday before the House of Commons standing committee on national defence is that he apparently does not seem to understand what his job requires. He needs to be replaced by someone who comprehends that the defence minister is not just a politician but one of just two people (the prime minister being the other) who is accountable to Parliament for the Canadian Armed Forces.

During the hearing, Mr. Sajjan repeatedly stated that he did not want to politicize the investigation into accusations of sexual misconduct and abuse of power by then-defence chief Jonathan Vance. This stand is simply wrong, legally and constitutionally, and did not fly well with the committee. First, the possible investigators – the military ombudsman and the Canadian Forces National Investigation Service – ultimately report to the minister of national defence. While he should not tell these agents what they should and should not investigate, he should be able to track the progress of the investigations. We still do not know what any of the so-called “proper authorities” Mr. Sajjan kept citing in the hearing found nor what he learned from those investigations.

Which gets to the second problem: The minister of national defence is legally responsible for the “management and direction” of the Forces, including the chief of the defence staff. Hence, while the chief is appointed by the governor in council (i.e., cabinet, and more realistically the prime minister), the defence minister is nonetheless responsible for the decisions and actions of the military’s highest-ranking officer. As provided by the National Defence Act, the chief of the defence staff serves at the pleasure of the government; there is no fixed term, so the chief can be replaced at any time.

Who decides when it’s time to replace a defence chief? The minister of national defence, along with the prime minister. So, going back to 2018, when the allegations apparently first reached Mr. Sajjan, the minister had two responsibilities: to do what was best for the Forces and fulfill his obligations as a minister of the Crown accountable to the Prime Minister. Regarding the former, the Forces were still struggling with how to improve conditions for women and other less well-represented groups. Mr. Sajjan mentioned in the hearing that his team put the personnel section of the defence review document, “Strong, Secure, Engaged,” at the front to demonstrate their commitment to the people of the Forces. Keeping Mr. Vance as defence chief despite these allegations suggests otherwise.

As such, allowing Mr. Vance to become the longest-serving defence chief was also political malpractice. Mr. Sajjan served the Prime Minister poorly by not advising him to remove Mr. Vance. Remember, at this time in 2018, Mr. Vance had served the expected term of office – three years. Mr. Sajjan could have simply replaced him and thanked him for his service; no one would have raised questions. Instead, people are now asking what the Prime Minister knew and when he knew it, suggesting a broader cover-up. So either Mr. Sajjan did not inform the Prime Minister directly, violating one of the most important rules in government – do not let your boss be surprised – or he did inform the Prime Minister. Either way, the Minister of Defence needs to bear the political costs of this scandal, which is in keeping with his legal and constitutional responsibilities.

One of the problems the Canadian Armed Forces face is the doubt that survivors of sexual misconduct have in the system. Many believe perpetrators will not be punished and that the chain of command will not hold to account those who violate their oaths and responsibilities. If Mr. Sajjan is permitted to stay on in his current role despite failing to do his job, that sends a strong signal to the troops that efforts to change the culture of the Forces stop before they get to the top. One of the most important elements of leadership is to be a good role model – to demonstrate the values the organization seeks to promote. The current Defence Minister is not a good role model for the military, not after mishandling the allegations against its highest-ranking officer. It is time for him to go.

Military ombudsman says his office must be independent of defence command structure to be credible
March 14, 2021

Sajjan tells MPs he did all he could about allegations against defence chief
March 12, 2021 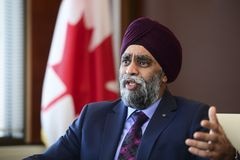