Robert Jago is an entrepreneur based in Montreal and a member of the Kwantlen First Nation.

The Trans Mountain pipeline debate has seen mainstream commentators and politicians in Canada position First Nations people with environmentalists and other “professional objectors” together on one side of the debate, with realists, job creators, and the national interest on the other. In effect, they pit First Nations issues and people against what they present as “serious” issues and people. Our Indigenous issues are seen as airy-fairy, theirs are about bread and butter.

However, this week’s decision by the Federal Court of Appeal to revoke the licence for the Trans Mountain pipeline expansion, and the victory of the First Nations that launched the suit, show once again that mainstream Canada’s failure to treat First Nations issues as serious is itself what is most destructive to the national interest.

Thursday’s court ruling declared that the government’s consultations with First Nations were nothing of the sort, but instead were mere “note-taking” sessions designed to tick a box in an approval process whose outcome had already been decided.

In explaining her decision, Justice Eleanor Dawson wrote: “Meaningful consultation is not intended simply to allow Indigenous peoples ‘to blow off steam’ before the Crown proceeds to do what it always intended to do. Consultation is meaningless when it excludes from the outset any form of accommodation.”

With this decision, the fate of the recently nationalized pipeline is uncertain. The Trudeau government is scrambling to decide on their next move – will they cave in to Conservative opposition and provincial politicians in Alberta and appeal? Or will they obey the court order, follow the rule of law and restart consultations with First Nations people with a more open mind as to the outcome?

The official reaction so far, led by Finance Minister Bill Morneau, doesn’t suggest an opening of minds. Speaking on CBC’s Power & Politics, Mr. Morneau stated: “We are absolutely committed to moving forward on the project.”

But maybe this is just posturing while the government wipes the egg off its face. That egg didn’t just hit the government; official Canada as a whole, including the media, commentators and provincial leaders, all look foolish for having so thoughtlessly misled Canadians into believing the pipeline approval process was legal, fair and objective. They acted as if meaningful First Nations consultation doesn’t matter – that it’s a pro forma act, one that can be eye-rolled away.

However the courts have found for First Nations, and with this decision, they have put meat on the bones of consultation, showing how it should work and why.

And so what is meaningful consultation? Some of the same commentators who dismiss First Nations people generally as being unserious, throw their hands up at the idea of consultation, as if it were ethereal, impenetrable and impossible to understand. However, the decision is clear on where consultation failed with Trans Mountain, and what it should look like.

In sum, consultation needs to be done when Indigenous rights are affected by a development. Consultation must include the possibility of accommodation. Each affected First Nation is entitled to its own consultations, particular to their own circumstances.

The court goes further and takes the radical position that First Nations people are Canadian citizens, and so: “a project authorization that breaches the constitutionally protected rights of Indigenous peoples cannot serve the public interest.”

In making the decision, the court gave the example of the fishing rights of the Stó:lō people – the nation to which I belong. Justice Dawson writes: “Canada concluded that Project construction and routine maintenance during operation would be expected to result in a minor-to-moderate impact on the Stó:lō’s freshwater fishing and marine fishing and harvesting activities.”

Fishing and the salmon and the eulachon are what our communities are built around. Our faith includes ceremonies to preserve the salmon and protect their habitats. The income earned during the short fishing seasons – sometimes just days long – sustain families the whole year.

Under the current form of consultation, the government took note of our concerns and then did nothing in response. As if the act of writing it down was sufficient.

Under the system of meaningful consultation described by the courts, finding accommodations for our concerns must be an option. Imagine how that would look. It could mean moving construction and maintenance schedules so as to not interfere with the vanishingly short fishing season. It could mean creating a system to co-ordinate maintenance and construction with First Nations fishing authorities to ensure no damage to important ecosystems is done. When something so grandiose as the national interest is at stake, is this type of accommodation too much to pay for it?

This isn’t the politics of magical thinking. Consultation is the politics of concrete solutions – solutions that ensure that our peoples are never again asked to sacrifice our livelihoods and health so that non-Natives can reap a benefit.

Official Canada, and its hard-headed commentators and politicians who are today busy rushing before cameras to puff out their chests and stamp their feet need to grow up and join First Nations in the real world. If any development is to happen in Canada, they need to learn to take the duty to consult seriously – there is no more important job in Canada today. 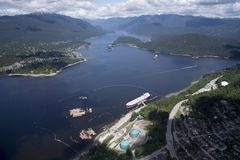 Opinion
Why nationalizing the Trans Mountain pipeline is undemocratic
June 7, 2018