Charles Lewis is a former editor and reporter at the National Post.

I just did something I have never done before in a U.S. presidential race: vote for a Democrat.

I had no choice. I want to see Donald Trump and his Republican enablers crushed. I want to see Lindsey Graham and Mitch McConnell and other Trump sycophants chased out of Washington.

I do not love the Democrats and nor do I love Joe Biden, though at least the Democratic candidate seems made out of flesh and blood and radiates a much-needed empathy. Nor does Mr. Biden have the instincts and character of a dictator. That alone sets him apart from the current occupant of the White House.

In recent elections I voted for George H.W. Bush, George Bush, John McCain and Mitt Romney. When I voted for these men I did it because I believed they would do the best job. I did not do it out of loathing for their opponents.

In 2016, put off by Mr. Trump and Hillary Clinton, I voted for an obscure conservative candidate who did not have a hope in hell.

Not this time. Even though my single vote will not count for much, I do not want to take any chance that Mr. Trump might be re-elected.

The things that have come out of his mouth are simply foul. At last week’s debate he refused to condemn the Proud Boys, a white supremacist group. Nor would he condemn white supremacy in general.

He has refused to blame Vladimir Putin for meddling in the U.S. election. He confessed his love for North Korea’s Kim Jong-un, the most murderous tyrant in power today.

He is destroying American democracy by casting doubt on the legitimacy of the election and undermining a free press. He has threatened not to leave office. I fear violence in the streets as he gives a nod and wink to his most fanatical followers.

It makes me heart sick to see what he is doing to the country of my birth and that of many of my relatives and ancestors.

Mr. Trump lost me when he denigrated Mr. McCain’s war service. Mr. Trump said he prefers his heroes free – a hideous thing for a man who never risked his life for his country.

I really thought at that moment the country would turn on him. How dare he mock such sacrifice?

My father was a U.S. infantryman in Europe in the Second World War and he dealt with his wounds as guest of the Germans in a POW camp. I always thought he was a hero.

But once Mr. Trump was elected, I hoped against hope the gravity of the office would temper him, make him more humble – especially given three million more Americans voted for Ms. Clinton.

Instead, he claimed fraud. The popular vote was rigged. Then he bragged that his Electoral College victory was the greatest in history. It was not, but it was the only way he could deal with being rejected by the majority of voters. Mr. Trump is always the victim.

On the day after he took the oath of office, he went to give a speech at the CIA. He stood in front of the Memorial Wall and lied about the inauguration crowd size. Pettiness doesn’t even come close.

I could fill page after page with his lies, which have had fatal consequences during the pandemic.

We now know, thanks to journalist Bob Woodward, that in early 2020 Mr. Trump understood how deadly the virus was but refused to relay that to Americans. He also thought the Democrats were using the virus to hurt his re-election chances.

He is even willing to expose his supporters to grave illness. During the worst of the pandemic, he held an indoor rally in Tulsa, Okla. – no masks required. Attendee Herman Cain, a former GOP presidential candidate, died of the virus. And now COVID-19 is wreaking havoc in the White House, with Mr. Trump himself contracting the virus. He is still playing it down, telling Americans there is nothing to fear – ignoring the devastating fact that more than 211,000 Americans have died and many who have recovered are still feeling the ill effects.

I do not want to see the end of the Republican Party. When I was 18 years old, I registered as a Republican because I saw it as a party of honour. It really was the party of Lincoln. Now, I find the label embarrassing – a repudiation of all that was good in my home country.

It is not too late for the GOP to reassert its true self. But if Mr. Trump is re-elected, I fear the Republicans are doomed and the United States will be in danger of losing its soul.

Biden says U.S. voters ‘will not stand for’ Trump refusing to leave office if he loses in November
Subscriber content
September 30, 2020 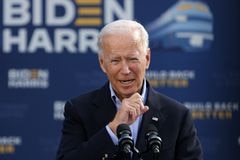 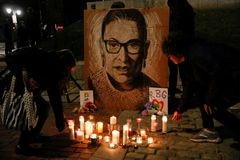