Daoud Kuttab is a former Ferris professor of journalism at Princeton University and the head of the press freedom committee within the board of the International Press Institute.

The London-based daily Al-Araby Al-Jadeed recently published a cartoon, by the Jordanian artist Emad Hajjaj, depicting a faceless man wearing a red and white keffiyeh and sweeping his brown thobe in such a way that it looks almost like he is performing a magic trick. Whipped up by his movement, papers float around him. At the bottom of the frame, the hand of another man, wearing what appears to be a white button-down shirt, reaches up, apparently having let go of his pen in order to try to grab onto something, to save himself. The caption reads, “The disappearance of Saudi journalist Jamal Khashoggi.”

The cartoon names the victim, but not the perpetrator. True, any Arab – indeed, virtually everyone – knows exactly who is responsible for Mr. Khashoggi’s disappearance this month: Crown Prince Mohammed bin Salman of Saudi Arabia. But the fact that a well-known cartoonist had to disguise the culprit’s image speaks volumes about the fear felt by independent journalists in the Arab world. Mr. Khashoggi’s disappearance has only deepened their anxiety.

Arab countries have a long history of rewarding journalists who toe the official line, while punishing those, like Mr. Khashoggi, who dare to speak truth to power. Since the failed Arab Spring revolutions – of which Tunisia is the only success story – citizens across the region have found themselves with a stark choice between radical Islamist regimes and military rule. Efforts presenting democratic alternatives have been systematically repressed.

Discrediting, constraining or otherwise silencing independent journalists is a key tool of this repression. Autocratic governments create laws and regulations to protect themselves and their cronies from criticism or exposure by independent media. They claim that only the journalists on their payroll – who praise their rulers and criticize the regime’s opponents – are legitimate; all others are enemies of the state.

Such behaviour is not limited to dictatorships. Even in the United States – long admired for its robust free press, protected by the First Amendment of the U.S. Constitution, and powerful investigative journalism, which once brought down a president – President Donald Trump’s administration routinely attacks independent journalists, labelling them traitors, paid agents and purveyors of “fake news.”

Mr. Trump may simply be trying to appease his right-wing base and avoid accountability for his innumerable mistakes and misdeeds. But his attacks on the U.S. press, together with his silence on attacks occurring elsewhere, have gone a long way to embolden violators of press freedom around the world.

It does not help that many of those press-freedom violators – including Saudi Arabia – are among the United States’s closest allies. Mr. Trump has been true to America’s all-too-frequent willingness to place lucrative military contracts ahead of human rights, saying that he would be “very upset and angry” if Saudi Arabia were found to be responsible for Mr. Khashoggi ’s death, while ruling out a halt to big military contracts.

The United States’s fellow NATO member Turkey is the world leader in imprisoning journalists, yet the Trump administration has complained only about the detention of one (recently released) American pastor, and that was just to placate America’s “religious right” (beginning with Vice-President Mike Pence). The U.S. authorities have said nothing about Al Jazeera journalist Mahmoud Hussein’s nearly two-year detention in Egypt.

Nor has the Trump administration commented on the fact that, in March 2017, the United Arab Emirates sentenced the Jordanian journalist Tayseer al-Najjar to three years imprisonment and a fine of 500,000 UAE dirhams (approximately $176,000) over a Facebook post. Even countries that are not particularly close U.S. allies – such as Myanmar, where two Reuters journalists have been sentenced to seven years imprisonment – do not face pushback from the United States

Independent journalists have one goal: to find the truth and share it widely. When governments can repress those journalists with impunity, and when others compromise their supposed commitment to basic human rights for political or partisan goals, the truth remains hidden, with serious consequences.

I have known Mr. Khashoggi for years, both in a professional and a personal capacity. He is a Saudi patriot who is not opposed to his country’s system of rule. Yes, he has critiqued policies, such as the inhumane war in Yemen and how Saudi rulers deal with dissent. But his arguments were always based on facts. He is not a dissident or a rebel, but a monarchist who wants to see his country do better than it is. And now he may have paid the ultimate price for that.

For Arab freedom fighters, the road ahead is long and treacherous. Building on the sacrifices of true heroes and genuine democrats, journalists and cartoonists like Mr. Hajjaj will continue to speak truth to power, as they fight for basic human rights like freedom of the press. It is truly unconscionable, however, that they must go into battle without the support of those who claim to have their backs. 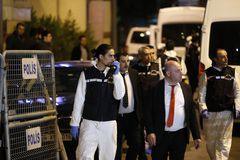 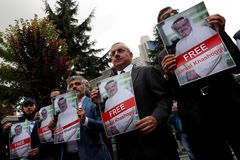 Explainer
Who killed Jamal Khashoggi and why? A primer on what happened to the slain Saudi journalist
January 24, 2019 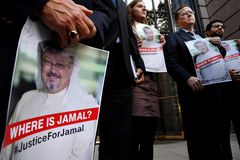