With the acute care system in his province on the verge of being overwhelmed with COVID-19 patients, Alberta Premier Jason Kenney finally decided to take tougher action Tuesday in a bid to halt the virus’s deadly march. Unfortunately, the response was certainly weeks too late.

On the same day that the Premier announced 16 more COVID-19-related deaths in Alberta, he declared a state of public-health emergency and a suite of new measures that include: mandatory masks in all indoor work settings, no indoor social gatherings of any kind and a 25-per-cent occupancy limit at restaurants, bars and retail outlets.

They were at least some of the measures that doctors and nurses in Alberta had been pleading with the Premier to take much earlier, when it was evident that the virus had returned with a vengeance, packing a punch far more powerful and deadly than the one it delivered in the spring.

When the history of the country’s response to COVID-19 is written, there will surely be a chapter devoted to the Alberta government’s bewildering and, in many ways, grossly negligent response to handling the crisis.

It seems becoming the epicentre of the disease in Canada, with per-capita case numbers making places such as Ontario and Quebec look almost New Zealand-like by comparison, was enough to compel Mr. Kenney to bring in the kind of orders that were put in place in most every other part of the country far earlier.

Having the hashtag #whereiskenney trending across the country is never a good look politically either. Perhaps it was the Premier’s social-media team who convinced him it might be in his best interest to address a health emergency that has the potential to undermine the one thing his government’s inaction was supposed to protect – the economy.

“There can be no sustained economic recovery [in Alberta] without controlling the virus – period,” noted economist Trevor Tombe said last week.

The measures announced Tuesday would not have been easy for Mr. Kenney to accept. He is libertarian by nature, one who has enormous sympathy for those Albertans who associate COVID-fighting directives to wear masks and avoid social gatherings as intolerable infringements on their personal liberties.

But those freedom fighters were always in the minority, a fact Mr. Kenney seemed blind to. A new poll by Alberta-based ThinkHQ released on the weekend confirmed that. In the survey, 81 per cent of Albertans said they wanted a provincewide order that made wearing a mask mandatory everywhere. And 61 per cent wanted a temporary shutdown of the retail and entertainment sectors for up to a month to act as a “circuit breaker” that would sever the virus’s seemingly unassailable ascent.

Mr. Kenney also seemed to be captive to those voices in business and the media imploring him to take into account the fact that the virus was mostly killing older people with pre-existing conditions, while the majority of those who contracted the virus recovered fairly quickly. These would be the same people who subscribe to U.S. President Donald Trump’s viewpoint that shutting down the economy in response to COVID-19 would be more harmful than the virus itself.

This at the same time that doctors and nurses, the ones actually dealing with the fallout from the virus, have fruitlessly been urging the Premier to understand the longer he waited to take serious action, the more catastrophic the consequences of his dithering would be. The Globe reported this week that the number of patients in intensive care could double in the next two weeks. According to Alberta Health Services, hospitals in Calgary and Edmonton are already running at 120 per cent capacity.

The province’s contact-tracing apparatus, meantime, has already become a victim of Mr. Kenney’s delay tactics. With daily case numbers rising to as high as 1,584, the system effectively crashed. There will be no attempt to contact trace, for instance, those who may have been exposed to the virus a week ago or more. The province will just focus on new cases. But at the rate things are going, who knows how long it will be before they’ll have to abandon these efforts once again?

Deena Hinshaw, the province’s Chief Medical Officer of Health, has also come under intense criticism for the current state of affairs. That seems unfair. It is inconceivable she would not have recommended that the government introduce tougher measures weeks ago. It’s up to Mr. Kenney and his cabinet to accept that advice or not.

In the end, the Premier could no longer ignore the growing chorus demanding he set aside his personal ideologies and do something about the raging fire threatening to consume the entire province. 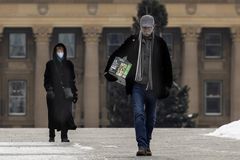 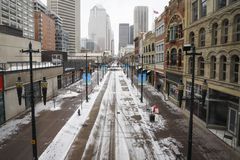 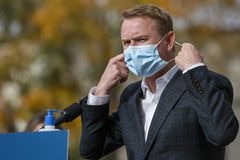