Michael W. Higgins is a distinguished professor of Catholic Thought, Sacred Heart University, Conn. He is the author of Jean Vanier: Logician of the Heart

Richard Harries, the former Anglican Bishop of Oxford and a highly respected theologian, observed in his 2016 book The Beauty and the Horror that there are certain dimensions of human life that are cross-cultural and speak to the possibility of a benign power operating in the universe. One of these dimensions is the “presence of some truly good or holy people whose example exposes the hollowness of our own lives and challenges us to emulate them. In such people too, there is a moral and spiritual beauty that beckons us.”

One person who beckoned multitudes with his sheer charisma, and the moral and spiritual beauty of his ministry, was the global humanitarian, peace activist, disabilities advocate and spiritual writer Jean Vanier.

Mr. Vanier was a Companion of the Order of Canada, Templeton Prize winner, recipient of countless distinctions national and international, religious and secular, and enjoyed a public profile equalled by few. He was a man smothered in honours – none of which he sought – and although appreciative of them, he remained detached from their lustre. In time, he declined many of them. I know because when I was a president of a university, I tried to lure him to our campus with an honorary doctorate, only to be politely informed that he no longer accepts them.

His self-effacement is key to understanding his spirituality and a motivating impulse for his global life of service; and this combination of personal humility coupled with a vocation to serving others was in his blood from the outset.

His parents, Georges and Pauline, were for many years Canada’s vice-regal couple, and were closely connected with the spiritual and intellectual aristocracy of France – the philosophers Jacques Maritain and Étienne Gilson, for instance. Among his other siblings, his sister Thérèse was a Cambridge-trained hematologist, the first female consultant at St. Thomas Hospital in London and an early and close associate of Dame Cicely Saunders and the hospice movement, while his brother Georges Jr., better known as the Trappist monk Father Benedict, was a contemplative mentor to scores of people. His family had a luminous spirituality seemingly encoded in their DNA. His maternal grandmother shared the Jesuit spiritual director, Almire Pichon, with no less a holy celebrity than St. Thérèse de Lisieux. Hard to beat a pedigree such as this.

And yet, Mr. Vanier wasn’t the product of his spiritual genes. He had to find his own way. Key to that spiritual quest was the trust his father had in him. At the age of 13, he approached his father with the request that he be allowed to join the Royal Naval College in England in order to make his contribution to fighting the Nazis. His father, the former ambassador to France who made his escape to England with his family in 1940, could have easily dismissed Mr. Vanier’s proposal as hopelessly idealistic.

Instead, he listened to him respectfully, and invited him to trust his judgment. In doing so, he affirmed his son’s “deep intuition,” validated the “sanctuary of his being” and freed him to trust himself. In later years, Mr. Vanier would reflect on this epiphanic moment in his relationship with the father he deeply loved. He learned what would become “an operating principle of his life and ministry: we must listen to the young because they have in them the light of God, and they will never be able to trust themselves unless someone trusts them first.” Trust instilled.

In time, he would become a Canadian naval officer, acquire a doctorate in philosophy from the Institut Catholique de Paris, and work closely with a Dominican friar, Thomas Phillippe, whom Mr. Vanier identified as his spiritual father. He contributed to the inspiration that would become Mr. Vanier’s signature accomplishment: the creation of L’Arche.

Born out of Mr. Vanier’s conviction that he needed to be present in a concrete way with those suffering from various mental and emotional disabilities in order to better discover what it means to be truly human, the original L’Arche home consisted of three former residents of St. Jean les Deux Jumeaux, an asylum for the intellectually disabled, living alongside Mr. Vanier. It was 1964 in Trosly-Breuil, France, and the first home of the Ark came into being. Over the decades many such homes would be created throughout the world – discrete and independent, but under the larger umbrella of L’Arche International.

Thomas Phillippe’s own contribution would be greatly compromised by revelations that surfaced in 2014 when several allegations of sexual abuse by women were levelled against the always controversial friar. Mr. Vanier and the L’Arche International moved quickly to request a canonical investigation, established the credibility of the charges, formally acknowledged the pain generated by the Dominican friar and reviewed the nature of his contribution to L’Arche’s development. Père Thomas died in 1993 and so avoided the consequences of his actions, but for Mr. Vanier, it was the low point of his ministry and he faced the consequences. Trust betrayed.

But the work of L’Arche and its reputation remain undimmed by the behaviour of one errant cleric.

Mr. Vanier’s essential philosophy is grounded on two pillars: the mind and the heart. Aristotle is the mind and St. John the Evangelist is the heart. These two figures shaped his intellectual perspective and spiritual sensibility. But he wasn’t constrained by them – they opened up vistas of inquiry and deepening interiority that took him to Aquinas, Holocaust martyr Etty Hillesum, the writings of the monk-poet Thomas Merton, the radical activism of pacifist Dorothy Day, ethicist Stanley Hauerwas and countless others.

Although deeply and unapologetically Catholic in his ancestral roots and spiritual vision – he was friends with popes and saints – he was also expansive and inclusive: “The strength of L’Arche is that its mission is deeply human. L’Arche is about helping people with a disability discover their human value, their personal beauty and the importance of their own individual conscience. Some of our communities are made up of people of different religions, human beings who rejoice together and sometimes weep together. At the heart of L’Arche’s life is the joy of communion.”

Mr. Vanier’s capacity for human empathy was inexhaustible. I have seen him look with tenderness on the pain of a suffering individual, saying nothing, embracing the other with his eyes. He was the lover.

His capacity for choosing to stand with integrity against righteous outrage was on display when, contra the public outcry against the massacre of the journalists working at Charlie Hebdo, he cautioned against fuelling the fires of violence and did not countenance the Je suis Charlie Hebdo protests when to support them was seen as a sign of national unity. He was the prophet.

As he neared the end of his life, this highly prolific writer and much sought-after speaker elected to be enveloped in silence, caressed by peace, consoled by the God he adored. He was, in the end, the mystic. 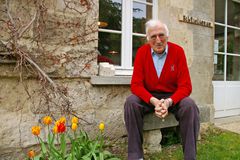