“What kind of country have we become?” Senator Lindsey Graham, Republican of South Carolina, was really not enjoying protesters’ vocal disruption of the Senate confirmation hearings for Supreme Court nominee Brett Kavanaugh this week. “None of this happened a couple of years ago. It’s getting worse and worse."

It’s true that the public gallery of the hearing room in Washington, D.C., was filled with protesters alarmed at the prospect of a Supreme Court newly tipped in the conservative direction, and what it might do to workers’ rights, migrants’ rights, women’s rights. It was not true, however, that any of this was new.

Perhaps Sen. Graham needed to take a short walk over to the American History Museum, one of the gems of the Smithsonian complex, to learn about the central role of dissent and protest in American life. There, he would find the Woolworth’s lunch counter, site of a famous 1960 protest by four Black North Carolina teenagers against segregation laws; photos of disabled veterans gathered in angry public demonstrations; the wagon that delivered a woman’s suffrage newspaper a hundred years ago, with “equal pay for equal work” painted on the outside.

Protest is an integral part of American life and democracy. This week, it detonated in the genteel halls of power, and the people who like to claim those halls as their own did not like it one bit. “These people are so out of line they shouldn't even be allowed in the doggone room,” grumbled Republican Senator Orrin Hatch. The President of the United States, who perhaps has not read the Constitution he swore an oath to defend, wondered why protests were allowed at all.

Protesters in wheelchairs were dragged out of the confirmation room as they shouted down senators. If you watched the hearings, which contained enough drama to fuel HBO for a year, you’d hear advocates screaming, “This is a stolen seat!” and “Save Roe!”

This is where we come to the crux of the matter. After lamenting the incivility that marred the day, Sen. Graham asked Mr. Kavanaugh if he was “familiar” with Roe v. Wade, the landmark 1973 Supreme Court decision that allowed women across the nation access to legal abortions. He said it with a smile, because nothing is funnier than a couple of men bantering about the reproductive futures of millions of women. Mr. Kavanaugh responded with a nervous laugh that he was.

Many of the protesters were in that room because they worry that Mr. Kavanaugh will tip the knife’s edge balance of the court toward overturning Roe. So far, the nominee has been cagey, saying during the confirmations that Roe is “’settled law,‘’ although in an email leaked to The New York Times he wrote: “I am not sure that all legal scholars refer to Roe as the settled law of the land at the Supreme Court level since Court can always overrule its precedent.” Women’s health advocates, having examined his rulings and dissents, worry that his appointment would “all but assure the demise of American abortion rights,” as the director of the National Abortion Rights Action League recently put it.

What’s going on in that hearing room is part politics, part abstract legal exercise, but if Roe is overturned, the exercise will become very real, and possibly very dangerous, for American women. Four states have “trigger laws” that would ban abortion if Roe is repealed. Reproductive choice and abortion access are already under threat at the state level across much of the country, even though 57 per cent of Americans in a 2017 Pew Research poll supported women’s right to choose (and 69 per cent opposed overturning Roe.)

If there’s any time to stand up and yell, it’s now. The yelling will likely be fruitless, since the Republicans have the votes to confirm Mr. Kavanaugh. But it will serve to galvanize women to fight for reproductive rights at the state level, and to advocate for women on the margins who will be the most harmed by overturning of Roe. They are the ones who won’t be able to travel for an abortion, to find child care, to afford time off work. The protesters are yelling for them, and what sounds like caterwauling to a bunch of senators sounds quite musical to the rest of us.

The American protesters might take heart from their Canadian sisters, who performed an equally unladylike act of social justice warfare nearly 50 years ago. In 1970, a small group of women left Vancouver to travel across the country to Ottawa to protest the country’s new and restrictive abortion laws, in a convoy that came to be called “the Abortion Caravan.”

When they arrived in Ottawa in May, no politicians would speak with them so they decided to protest, peacefully and forcefully, by disrupting a session of Parliament. They chained themselves to seats in the public gallery of the House of Commons and shouted at the politicians below. The Speaker adjourned the session as activists were escorted out. “History and pandemonium in the House of Commons,” a CBC radio reporter intoned that evening. “Women, some of them chained to gallery seats, scream and chant for free abortions.”

A few months later, Prime Minister Pierre Trudeau deigned to meet with the women in Vancouver. They told him that his restrictive law would be harmful to one group in particular. A CBC radio documentary, The Women are Coming, picks up the exchange that followed, when one of the activists told the prime minister: “Rich women in this society get abortions. Poor women suffer.” He shot back, “So?”

So this is why women continue to fight for basic reproductive justice, in this country and around the world. Outside the Kavanaugh confirmation hearings, a group of women stood silently, wearing the red capes and white bonnets representing the brutal, woman-enslaving society of Margaret Atwood’s novel The Handmaid’s Tale. They were arrested.

Those protesters have probably read Ms. Atwood’s novel, or seen the television show it inspired. I’m pretty sure not many of the senators in that confirmation room could say the same. Why would they want to? It reads alarmingly like an instructional manual these days. “We lived, as usual, by ignoring,” says the novel’s narrator, explaining how her freedom slowly vanished. “Ignoring isn’t the same as ignorance, you have to work at it.”

Analysis
The slow but steady decline of abortion access in the U.S.
July 13, 2018 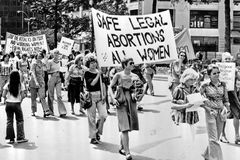 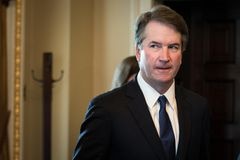 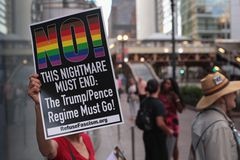