Arthur Schafer is the founding director of the Centre for Professional and Applied Ethics at the University of Manitoba.

The government of Ontario has a secret triage plan for the rationing of essential medical care. If a third wave of COVID-19 overwhelms Ontario’s hospital system, provincial protocols instruct doctors which patients should get priority life-saving treatments.

Although the guidelines have not been published, they reportedly mandate hospital intensive-care units to withhold life support from patients unlikely to survive at least 12 months. Patients already on life support will not have that support withdrawn, no matter how poor their prognosis.

The cabinet hasn’t yet given formal approval to these triage guidelines. Indeed, the Ministry of Health prefers to describe the plan as merely a “framework document” – with the implication that we need not pay too close attention. Nevertheless, the document has been distributed to the province’s hospitals.

Whether we label it a “plan” or something else, is it ethically defensible? Quebec, whose triage plan is public, allows doctors to remove patients from life support if their prognosis is poor, thereby freeing up resources for those more likely to benefit. If the goal is to save as many lives as possible, then Quebec’s plan seems ethically preferable to Ontario’s.

Most people understand that governments must plan in advance how to allocate resources in a public-health emergency. Absent such planning, decisions would have to be made by individual doctors at their patients’ bedside. Doctors would in effect become gatekeepers for life-support technology; however, this role fits uneasily with the principles they imbibed at medical school. “Every life is valuable. Every patient is entitled to appropriate treatment.” Instead of asking, “Would my patient benefit from admission to the ICU?” the doctor would be required to ask, “Which of my eligible patients will be most likely to benefit? Or which will benefit most?” For doctors to make this kind of life-and-death choice among their eligible patients seems inconsistent with the fundamental principle of the Hippocratic Oath: The life and health of my patient will be my first consideration.

In situations where some patients will likely benefit greatly from an ICU bed, while others will benefit only marginally, traditional physician ethics comes under pressure. “First come, first served” doesn’t seem like an ethically defensible moral rule when the patient who came first is unlikely to survive long while the patient who came second has a more favourable prognosis. Nor does the “first come” principle help when a decision has to be made concerning the withdrawal of life support once it has begun. For these reasons, giving doctors sole discretionary power to withhold or withdraw life support would impose on them a heavy moral and emotional burden. Equally or more important, it would lead to arbitrary and unfair differences in the way patients are treated.

Thus, a consensus has developed. In times of runaway pandemic, every province should have in place a triage plan for the distribution of scarce health care resources. But who should be responsible for establishing the provincial plan? The government of Ontario quietly established an advisory “bioethics table” to recommend guidelines. Unfortunately, its detailed recommendations have been kept secret. The alternatives considered by the panel and its reasoning are also concealed. Media questioning of the government has elicited a promise that there will be future consultations with “stakeholder groups.” The general public is apparently to have no input in the decision-making process.

Understandably, all this secrecy has generated public suspicion. People are wondering what is being covered up, or if the plan discriminates against the elderly, people with disabilities or racialized groups. It’s critically important that governments be held accountable. This means that even those who trust in the bona fides of the government should insist that, in a liberal democracy, the public has the right to be fully informed, hear expert discussions and weigh in with its own views.

Sadly, the Ontario government is not alone in its persistent refusal to recognize that secrecy promotes cynicism and distrust. Governments everywhere could learn a lesson from the “death panel” myth about Barack Obama’s Medicare plan. There was nothing in Mr. Obama’s legislation that would have led to individuals being judged as “unworthy of health care,” but millions of Americans were nevertheless misled. Similar myths about the Ford government’s intentions are already circulating.

Openness and transparency promote trust. When exposed to critical scrutiny by an informed public, the Ontario triage plan may come to be seen as reasonable and fair; but continued secrecy will inevitably feed suspicion that the government is concealing something nefarious. In a time of pandemic, trust is the most precious resource possessed by public-health officials. Once lost, it can be difficult or impossible to regain.

Editor’s note: A previous version of this story said the composition of the expert panel was secret. In fact, the members have been made public. 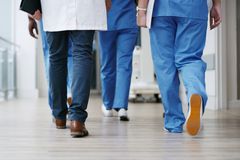