Michael Bociurkiw is a Europe-based global affairs analyst and a former spokesperson for the Organization for Security and Co-operation in Europe.

In what can best be described as the French version of diplomatic speed-dating, Ukraine’s TV comedian-turned-president Volodymyr Zelensky faced off for the very first time against veteran summiteer, Russian President Vladimir Putin. With his trademark swagger and bombast, Mr. Putin managed to do what he does best: promise as little as possible while creating the impression that he’s delivering generous concessions on behalf of the Russian Federation.

The summit was the first time that the Normandy Four, formed around efforts to try to broker a lasting peace in eastern Ukraine, have met in the past three years. The conflict, which started in 2014 after Russia illegally annexed Crimea, now ranks as one of the longest-lasting and costliest in the world, with about 14,000 dead and millions displaced.

But instead of bringing an immediate end or solution, the meeting only created a sense of déjà vu, with promises made for another ceasefire. Aside from more disengagement, the leaders also agreed to enhanced de-mining efforts and a broader role for the special monitoring mission of the Organization for Security and Co-operation in Europe (OSCE).

As Mr. Zelensky himself said, there have been about 20 ceasefires over the past five years, and none of them have held. In fact, just hours after the summit ended, ceasefire violations along the front line actually increased – including in Petrivske, one of the three existing disengagement areas. From my own observations with the OSCE, what has always been lacking is the political will to bring peace to what can best be described as Europe’s biggest open wound.

So far, here in Ukraine, reaction to Mr. Zelensky’s performance has been mixed but mostly positive. He came across as a quick study – empathetic and articulate. Crucially, he seems to have calmed widespread fears among Ukrainians that he would capitulate to Russia and agree to more autonomy for the occupied Donbass region.

The biggest obstacle to achieving an enduring peace in eastern Ukraine is sequencing: Mr. Putin is pushing for local elections in the Donbass, which could give the region a form of semi-autonomy. But Ukraine, understandably, wants some major confidence-building measures to happen first – including another prisoner swap, the return of Ukrainian control over the rebel-controlled section of its border with Russia, and withdrawal of weapons and armed individuals.

The leaders will meet again in four months and, in the intervening period, we will surely see more drip-feed steps toward peace. But there are solid ways forward available.

The Normandy Format summit did produce an agreement to bring the number of pilot disengagement areas to six from the current three. This may seem insignificant, but it will separate the two sides further. It will also bring immediate relief to people on both sides of the front line: Fighting occurs mainly in or near densely populated areas, and some of the neighbourhoods I visited during my time with the OSCE were so badly pummelled that they resembled hell on Earth.

The next areas where disengagement must occur are the flash points around the destroyed Donetsk Airport and the Donetsk Filtration Station. That station doesn’t only provide water to 350,000 people on both sides of the conflict line – it also stores liquefied chlorine gas that, if ignited, could cause mass casualties and an ecological disaster. A second water-filtration station at Verkhnokalmiuska, which supplies drinking water to 800,000 people and stores even larger amounts of chlorine gas, has also been in the line of fire, according to United Nations special rapporteurs.

As for Mr. Putin, he has the luxury of returning home and selling anything to the Russian public without consequences. But what he did not receive – even with support for his administration rising after some European capitals have suggested interest in a reset with relations with Russia – is relief from sanctions. That, combined with a humiliating ruling from the World Anti-Doping Agency that partly bans Russian athletes from the 2020 Olympics and 2022 World Cup, must have made for a horrible start to the week for the Russian leader.

If Mr. Zelensky continues to do his job well, such weeks should become more commonplace. 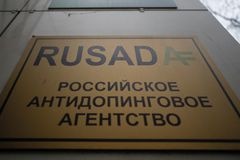 Russia’s election meddling, and its allies in the West
November 12, 2019 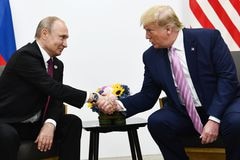 Opinion
This may be Putin’s endgame, says Garry Kasparov – but it’s our move
Subscriber content
September 13, 2019 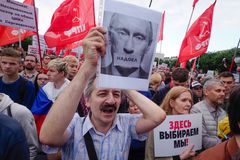