Grant Dawson is the author of Here is Hell: Canada’s Engagement in Somalia and an assistant professor at University of Nottingham Ningbo China. Brigadier-General (Ret’d) Serge Labbé was a Canadian Army infantry officer who commanded the Canadian Joint Force Somalia.

Canada has a history in Africa. That’s what Prime Minister Justin Trudeau said last November when introducing Canada’s new United Nations peacekeeping commitment in Mali. Specifically, he said, Canada has “had a troubled history” of peace operations in Africa.

Mr. Trudeau was not referring to Rwanda, where Canada and the world watched a genocide occur in 1994. He was not talking about Libya. Canada joined the intervention in 2011 that led to disorder from which that country still has not recovered. He was talking about Somalia.

The manner in which the Canadian contingent conducted operations in Somalia in 1992-93 should be seen as a shining success. Instead, it is regarded as one of the Canadian Forces’ darkest moments and most shameful failures.

With our Mali mission on the horizon, it’s time for a fresh look, lest we repeat errors of the past.

A Somali youth was tortured and killed by members of the Canadian Airborne Regiment, which was part of the Canadian Joint Forces Somalia, Canada’s contribution to a U.S.-led humanitarian intervention.

And this was not the only disturbing incident involving Canadians in Somalia. When the contingent returned in disgrace in 1993, its principal unit, the Airborne Regiment, was disbanded largely because of the mission. The UN evacuated Somalia in 1995 behind a second U.S. intervention that provided a protective screen for the UN withdrawal.

Somalis were essentially left to the warlords, until a decade later, when an armed group with terrorist links called the Islamic Courts Union seized southern Somalia. They were replaced by a weak UN-supported government that today controls little more than the capital, Mogadishu, propped up by African Union peacekeepers. The militant al-Shabab, an offshoot of the Islamic Courts Union, controls swaths of countryside and launches deadly attacks.

Why, then, look to the Somalia mission for lessons about Mali? Because it teaches us what not to do.

The Canadian mission in Somalia offers multiple lessons for the UN mission in Mali, but one in particular is of overarching importance. Construction of lasting peace and stability requires cultivating and sustaining the co-operation of the local people and, equally important, the long-term commitment by the international community, including international security forces. The Canadian government, along with the United States and other allies, intervened with the assumption that complex emergencies such as Somalia’s could be solved quickly and easily according to a politically driven schedule. With one or two notable exceptions, troop-contributing countries in 1992-93 were lacking any real commitment to the local people or security and humanitarian problems many years in the making.

But that wasn’t the spirit in which Canada’s contingent performed their duties in the desperate circumstances of famine-stricken, war-torn and stateless Somalia. First and foremost, the government authorized the deployment of a contingent that was well-resourced and balanced with requisite capabilities from all three services, operating under robust rules of engagement. Second, they performed a textbook example of bottom-up, locally led, empowering and event-driven conflict resolution and stabilization in one of the world’s most devastated countries and harshest environments.

The Canadian campaign plan combined security, governance and development approaches. The contingent invented the multidimensional approach to stabilization and reconstruction that is common sense today. The Canadians worked to build individual and institutional capacity from the outset. They recognized the importance of promoting economic development in all their activities. The Canadians strove to regenerate strong local institutions at the grass roots level. And they focused on reconnecting the people with the government in a social contract, recognizing that this is a prerequisite to lasting stability and peace.

Irreversible longer-term peace and security requires integrated commitment by all international security, governance and development experts over time. It must be event-driven. It cannot be politically fast-tracked. This is the over-arching lesson of Somalia. The Canadian contingent developed a model of joint, combined and inter-agency co-operation within the U.S. coalition. This would be recognized today were it not for the United States prematurely transferring responsibility for Somalia peace-building and national reconstruction to the ill-prepared UN follow-on mission.

Flash-forward to Canada’s role in Mali. Canada will deploy two Chinook transport helicopters, four Griffon armed helicopters, air and ground crew and troops who will facilitate medical evacuations and provide logistical support in Mali for one year. In 2013, several armed groups and terrorist organizations were in control of northern Mali and threatening the capital, Bamako, prompting a French-led intervention to which Canada contributed a Globemaster III heavy-lift transport. The UN mission, known as MINUSMA, was established in April, 2013 and is helping Mali’s government implement a peace agreement with armed groups and protect civilians.

Mali enabled an opportunistic Mr. Trudeau to deliver on a 2015 federal election promise to renew Canada’s participation in peace operations. Neither he nor most Canadian parliamentarians have comprehended that the traditional 20th-century peacekeeping they wish to reconstruct in today’s security environment is irrelevant. They were shocked when the Royal Canadian Air Force announced that the helicopters would operate under Afghanistan tactics, techniques and procedures. The politicians questioned why the aggressive force-protection measures were necessary in the face of the threat posed by the virulent al-Qaeda in the Islamic Maghreb (AQIM). More old thinking.

The completely political Canadian Mali contribution also ignores the progressive Somalia precedent of deploying a robust force into an unpredictable and highly volatile environment. MINUSMA has seen nearly 170 peacekeepers killed in action since April 2013. The UN mission requires two heavy transport helicopters available 24/7 – until earlier this month, Canada had committed to deploying only two, instead of the three necessary to guarantee two are always operational. It would appear that although the Trudeau Government had fallen into the trap of deploying numbers, a piecemeal photo op contribution, rather than a sustainable capability, they have given in to hard-earned military lessons learned.

Mr. Trudeau wants to say that “Canada is back” in terms of UN peacekeeping, but needs this to be easy, too. He knows Canadians will ask hard questions if they have to sacrifice too much or take on too much risk in the name of international peace and security. The Prime Minister is relying on the 20th-century understanding of peacekeeping because the harsher and starker reality would not feed into a liberal interpretation of Canada’s international role.

But the problem is, for Canada and for other troop-contributing countries to UN missions, the 20th-century blue-beret peacekeeping paradigm has been rendered irrelevant since Somalia in 1992-93. Canada has a history in Africa, but this commitment is about us, not the Africans we are meant to protect or UN peacekeeping.

Editor’s note: An earlier version of this article incorrectly said that Canada would not have the necessary helicopters for the UN mission in Mali. It announced earlier this month that it would also send the two spare helicopters needed for the mission. 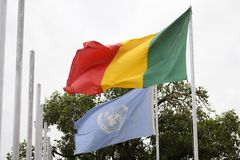 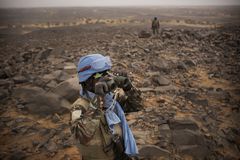 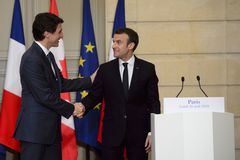