Naomi Buck is a freelance writer in Toronto

There was a time when school buses elicited baffling levels of excitement in my kids; when the destination of any field trip – science centre, pumpkin patch, historic site – was a mere footnote to the adventure of riding in the big yellow machine. That was before they began taking the school bus daily.

School busing, which has long since been a way of life for rural families in Canada, is now on the rise in and around our cities. It’s an expensive business: This year, the Ontario Ministry of Education allocated $961.4-million for school transportation in the province, up $40-million from last year.

And it’s an increasingly tricky one. Because as the demand for buses has grown, the supply of drivers has shrivelled.

Urban students are on the move. More and more are opting for specialized programs outside their catchments. Underutilized schools are being shuttered while influxes of newcomers and densification are outpacing the capacity of others. For the two years it will take to demolish and rebuild my sons’ school in midtown Toronto, all 568 students are being bused five kilometres across town to a holding school. Their school is one of three public schools in Toronto currently undergoing such a relocation.

Nobody should envy the transportation consortia tasked by school boards with organizing these migrations. The vehicle of choice – a 72-passenger, five-tonne bus – does not fit naturally into the downtown landscape, with its narrow streets, congested traffic and limited parking. And finding anyone willing to sit behind the wheel is increasingly difficult – for reasons evident even to young passengers.

“I would hate that job,” my eight-year-old said recently, having watched four successive drivers try – and fail – over the past two months, to master the task before them: getting the bus to school on time while managing the 43 kids, aged 3 through 12.

Among the goings-on aboard their bus so far: brawls resulting in bloody noses, insults being yelled at the driver and out the windows, under-the-seat games of tag (to remain out of the rear-mirror view) and older students instructing younger ones on the fine art of swearing. Seat-switching, bag-stealing and screaming have become the norm.

Over the years that my kids have been in the system, I’ve noticed that school regulations are consistent only in their inconsistency. At my kids' school, cartwheels were banned from the playground, along with umbrellas and certain kinds of balls, including ones made of snow – in the interest of student safety – while the mandated ratio of adult supervisor to student over the lunch hour is 1 to 99. The use of mobile phones is “strongly discouraged” on school property, and yet my son’s Grade 4 class managed, repeatedly, to view despicable corners of the dark web on their classroom computer. “Active school transport” – walking or biking – is encouraged, but there’s no crosswalk or stop sign to offer safe crossing of the street in front of the school.

And now, 43 kids – and some buses at our school carry as many as 60 – are being allowed to play Lord of the Flies on a moving bus.

So who’s in charge here?

“The school bus is an extension of the classroom,” says Kevin Hodgkinson, general manager of the Toronto Student Transportation Group, the consortium that manages bussing for Toronto’s Catholic and public-school boards, contracting out more than 1,800 buses from private operators. “The principal is in charge.”

This is true in legal terms; once students board the bus, they are the responsibility of the school.

But the principal is nowhere in sight, nor is any other school representative. The only adult on the bus is the driver who, hired by a contractor, has no direct relationship with the school. And beyond the brief module on behavior management that is a mandatory part of their training, drivers don’t have much to fall back on other than natural authority (if they happen to have any), the brakes and the notorious pink slip.

The pink slip is a form which drivers are supposed to use to report errant students, and then provide to the school; it sounds like a good system. “Are the kids behaving?” I asked Driver No. 3 one morning, having heard tales to the contrary. “Are they running around, throwing things, yelling out the windows?”

“Yup,” he said with a toothless grin, “all the normal stuff.” When asked if he used pink slips, he shrugged. “I don’t even know their names.”

It’s a problem. Driver No. 3, like all the drivers subsequent to Driver No. 1 – who lasted eight days – was a “spare,” meaning he was just filling in until a permanent driver could be found.

Driver No. 3 was popular with the students, reportedly taking a nice run at speed bumps to give the kids at the back of the bus decent air bouncing off their seats. But the chaos of the bus must have got to him. One dark Friday in early October, some kids got off the bus rubbing their foreheads. In a moment of exasperation, Driver No. 3 had apparently slammed on the brakes, sending some of his smaller passengers flying into the backs of the seats ahead of them.

According to my son, and contrary to the claims of Transport Canada – which has maintained until recently that kids on school buses are safer without seat belts – the backs of the seats are not thickly padded. So some little people on our bus had sore heads. Their parents didn’t like that.

The next Monday, we moved on to Driver No. 4.

On the city’s outskirts, in Scarborough, Patzi Brown has been driving school buses for eight years. The 31-year-old works as a spare. Given the current demand, she’s driving every day, but she’s selective and refuses to take 72-seat buses anywhere near the downtown core. More aggravating than misbehaving kids, Ms. Brown says, are their parents: Either they refuse to believe that their child could possibly do any wrong, or they insult her – or both. And she finds that schools offer little support. She’s had enough. “I’m not going to get attitude from kids and parents for $70 a day and no benefits,” says Ms. Brown, who is now transitioning to a career in trucking.

Driver retention is an industry-wide issue, according to Mark Begg, president of the Ontario School Bus Association, a non-profit that represents bus operators across the province. The foremost problem, he says, is low pay, with drivers earning somewhere between $14 and $18 an hour – considerably less than transit bus drivers – and working part time, split shifts.

Mr. Begg says the industry in Ontario has taken a major hit since the minimum wage was raised to $14 an hour earlier this year.

“Bus drivers manage commercial vehicles in traffic, deal with bad weather, grief from kids and parents and huge responsibility,” he says. “Then they see they could be making pretty much the same pushing the cash at Tim Hortons.”

To offset the impact of the minimum-wage hike, the Ontario Ministry of Education announced a $60-million retention program – providing operators additional funds to offer drivers incentives to keep driving – but Mr. Begg fears it’s not enough. Because the problem is not just retention; it’s also recruitment.

And it’s not just a city problem. David Rushton, transportation manager for the Peace River school division in northern Alberta, says this school year “started pretty bad.” He was down 15 drivers for the 75 routes that carry around 3,000 students from farming communities to the 17 schools in the Peace River district.

“It used to be that every farmer drove a school bus,” Mr. Rushton says, “and during the harvest, it was his wife. But now, there’s one farmer for what used to be 30. The farmhouses are being bulldozed, and those drivers just don’t exist anymore.”

With the help of an incentive program that reimburses training expenses, provides referral bonuses and allows drivers to bring their own preschool kids on the bus, Mr. Rushton has managed to staff his buses for this year. But the uphill battle continues.

Mr. Rushton thinks the solution to behavior problems on the bus is to embolden drivers, who typically “don’t want to get little Billy in trouble,” he says, adding that strong relationships need to be built between students, drivers, parents and school administrators. It makes a lot of sense – and it’s doable for Peace River which, like many smaller school districts across the country, runs its own transportation department: owning its own buses, employing its own drivers.

This is less doable in Toronto, where the chain of command is more convoluted. In our case, the school hopes to exert its authority through assemblies devoted to bus safety and posters promoting kindness and respect. But its invisible hand remains just that: invisible.

According to Lisa Weder, president of the Student Transportation Association of Alberta, many school boards in her province have had surveillance cameras installed on their buses. She says they’re generally popular with drivers, adding a source of evidence and protecting them from situations of he said, she said.

Of course – contradiction upon contradiction - there are cameras on my sons’ bus already, they’re just in the hands of students. The footage of misdemeanors remains on the “strongly discouraged” phones, while the chaos persists. And safety, kindness and respect remain lofty objectives, floating somewhere above the shiny yellow bus. Students – and drivers – deserve better. 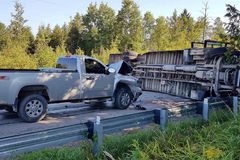 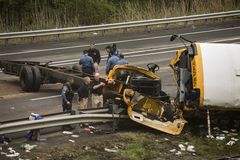 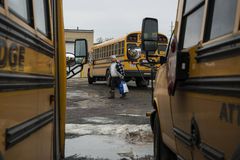