Contrition does not come naturally to Emmanuel Macron.

That it took a month of ever-escalating protests that brought parts of the economy to a halt for the French President to call a truce was evidence enough of this. The question going forward is whether Mr. Macron’s sudden burst of humility represents an epiphany on his part or just another political tactic as he tries to salvage what he can of a reform agenda now in tatters.

For almost 18 months following his election in 2017, Mr. Macron was the full-speed-ahead French President who seemingly delighted in lecturing his own people about their poor work ethic, sense of entitlement, lack of industriousness and misplaced chip on the shoulder.

On an August trip to Denmark, Mr. Macron marvelled about the “Lutheran people” and their willingness to embrace economic transformation, and bemoaned “the Gauls refractory to change” back home. He expressed confidence that he alone could change French minds.

Instead, Mr. Macron has been forced to change his own attitude. His Monday night televised address, watched live by some 23 million French viewers, was a mix of mea culpas and concessions. The tone was markedly different from any other speech the President had made, which is perhaps why it was so difficult for many to believe.

The “yellow vest” protests that had blocked highways and paralyzed the central shopping districts of French cities for four consecutive Saturdays were the result of “40 years of malaise bubbling over,” Mr. Macron said in Monday’s address from the Élysée Palace. “Without doubt, we have not been able in the past 18 months to provide a sufficiently rapid and strong response.”

Accepting his “part” of the blame, Mr. Macron conceded he had given many the impression that he didn’t care about their personal plights. “I also know that I have at times hurt some among you with my words,” he offered. “If I have fought to shake up the political system in place, its habits and hypocrisies, it is because I believe more than anything else in our country.”

Unfortunately, the concessions Mr. Macron offered to the “yellow vests” and the majority of French voters who support their demands will move France in the opposite direction from the one he has aimed to take the country since his election. They will do nothing to enhance French competitiveness or allow Mr. Macron to set an example for other European leaders on climate change or budgetary discipline.

Mr. Macron has already blown a €4-billion ($6.1-billion) hole in his government’s 2019 budget by cancelling a proposed fuel-tax increase and other tax measures aimed at cutting carbon emissions – which had been the original source of the gilets jaunes (yellow vest) protests. Now, the President has dug a deeper fiscal pit that will put France offside with European Union rules limiting euro-zone budget deficits to 3 per cent of gross domestic product.

The €100 ($152) monthly supplement Mr. Macron promised to those earning the minimum wage, the tax holiday on overtime earnings and the cancellation of a social solidarity tax increase on low-income pensioners will add another €4-billion to €6-billion to the deficit. The economic slowdown resulting from the pre-Christmas protests, which have caused a slump in tourism and retail sales, will also hurt government revenue.

As a result, the President who wanted to make France more like Germany may end up making it more like Italy. Unwieldy budget deficits, chaotic politics and an inability to get anything done could plague Mr. Macron for the rest of his five-year mandate. That would be a tragedy given the optimism that greeted his election and the goodwill he enjoyed at the outset of his term.

Perhaps the only consolation for Mr. Macron is that the protesters clamouring for his resignation appear to be just as disillusioned with France’s opposition leaders. Surveys indicate the “yellow vests” spurn all political parties, having lost faith in the electoral system to translate their demands into concrete action. While it is likely impossible for Mr. Macron to win many of them over, his concessions are aimed at turning overall public opinion his way.

If more French voters come to believe the “yellow vest” protesters have proved their point, and have become a menace to public order, Mr. Macron may succeed in at least neutralizing the greatest threat to his presidency thus far. But he is far from out of the woods.

Forty years of malaise can’t be dealt with in a fortnight, nor a single quinquennat, as each five-year presidential term is known. Mr. Macron will henceforth need to proceed with caution and, especially, compassion. Otherwise, he’ll become just another European lame duck. 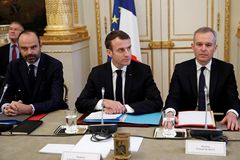 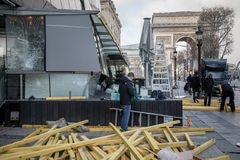 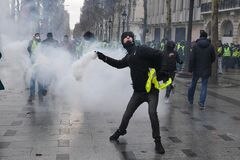