Another day, another multibillion-dollar deal. That’s the way it goes in the marijuana market these days as eager entrepreneurs scramble to position themselves for legalization. On Monday, a medical-marijuana company called MedReleaf (get it?) was snapped up for a dizzying $3.2-billion. The medical market is the back door to the honeypot.

According to marijuana producers and industry advocates, cannabis is a sort of magic elixir – good for all manner of ills including pain, nausea and vomiting, anxiety, depression, sleep disorders, glaucoma, PTSD and pain related to cancer or just about anything else. By acting as a substitute pain and anxiety reliever, cannabis, they claim, can reduce the use of alcohol, tobacco, opioids and antidepressants. The MedReleaf website (which features a picture of a smiling doctor) tells us that the company “leads the way in uncovering the immense potential of this medicine.”

At the same time, hundreds of Canadian military vets who suffer from PTSD claim they are in acute distress because Veterans Affairs Canada has cut their payouts for medical marijuana, which had soared to more than $60-million a year. Some were consuming enormous doses and say they can’t do without it.

So, what does the evidence say?

Dr. Mike Allan is director of evidence-based medicine for the University of Alberta.His group surveyed the medical literature on marijuana in order to develop national guidelines for family doctors across Canada. They came to some tough conclusions. They found that marijuana’s benefit for treating pain and nausea is “low or very low.” And so on. “For most things we shouldn’t be recommending it because we don’t have enough research to say if the benefits of the therapy outweigh the risks,” Dr. Allan told the CBC. As for mental-health problems such as anxiety, depression and PTSD, he said the research does not support the use of marijuana as a remedy. “The benefits, even if they’re real, are much smaller than what people might anticipate.”

Now that full-blown legalization is at hand, the medical community is split over whether doctors should still be involved in prescribing it at all. The Canadian Medical Association wants its doctors to get out of the medical-marijuana business entirely. “There’s really no need for physicians to serve in that gatekeeper role,” Dr. Jeff Blackmer told the CBC. Not everyone in the industry would concur. Doctors, after all, confer legitimacy.

Some doctors and pharmacists liken medical marijuana to the “new herbalism,” pointing out that conditions such as fatigue, appetite or nausea are quite subjective, and that marijuana doesn’t come in standard dosages manufactured with high-calibre precision. Unlike aspirin, there’s no guarantee that your next dose of Maui Wowie will resemble your last one. In other words, any similarity between pot and medicine is an illusion that benefits those manufacturers who stand to profit from it.

Benedikt Fischer is an expert in the public-health issues surrounding marijuana. He points out that the research has been quite limited and that we need high-quality clinical trials before the evidence on marijuana is conclusive. He told me that he does think it has “potential” for certain conditions, such as anxiety and spasticity – but certainly not for autism or other more serious illnesses, as some people believe. As for the hope that marijuana will somehow solve the opioid crisis – don’t hold your breath. The idea is that medical marijuana can substantially replace opioids, antidepressants, painkillers and many of the other potions that people use to medicate, soothe themselves and get high. But so far the evidence isn’t there. Our guilt and frustration about the worsening opioid crisis have simply resulted in a lot of wishful thinking.

For the record, Dr. Fischer is a strong proponent of full legalization, along with a tightly regulated marketplace to reduce the harms of consumption. The rationale for legalization is not that pot is good for you or even harmless, but that legal, regulated pot is the least of all evils. This approach is unavoidably in conflict with the interests of the marijuana producers, who would like to persuade us that marijuana is a healthful, life-enhancing good.

So far, it is their narrative that has prevailed. They have positioned their product as basically therapeutic – a branding strategy that will also help them immensely in the recreational market.

“I AM SO HAPPY WITH YOUR SERVICE,” says one testimonial from a satisfied customer on MedReleaf’s website. “The [product] I received last time is a god-sent gift. To be able to sleep with no pain is a real gift. Thank you!”

In other words, the barn door is wide open and the horses have bolted. Good luck trying to get them back.

Globe editorial: The Senate should stand down on cannabis
May 6, 2018 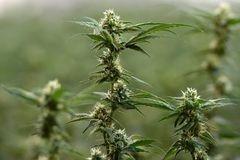 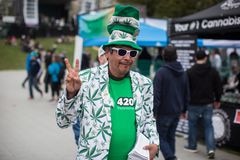