David Mulroney was Canada’s ambassador to China from 2009 to 2012. He is the author of Middle Power, Middle Kingdom: What Canadians Need to Know about China in the 21st Century.

It has been a month since the detentions of Canadians Michael Kovrig, a former diplomat now working for the International Crisis Group, and Michael Spavor, an entrepreneur who specializes in organizing high-profile visits to North Korea. In the absence of any credible evidence to the contrary, we have to assume that both were seized by China in retaliation for the arrest in Vancouver of Meng Wanzhou, chief financial officer of the Chinese telecom firm Huawei.

The Kovrig detention ushers in a disturbing new reality for diplomats in Beijing. Up until now, they have been confident that their immunity from prosecution allowed them full scope to do what they were sent to China to do − understand what’s happening there and why it matters. Importantly, the Vienna Convention, which governs these things, extends this immunity in time, meaning that an individual can’t be prosecuted for prior diplomatic work after diplomatic status has been relinquished.

Canada protests China’s interrogation of Kovrig over past diplomatic work

But it now appears that Mr. Kovrig’s interrogation by Chinese officials has been focused on his former role as a diplomat. (On Thursday, Hua Chunying, a spokesperson for the country’s Foreign Ministry, said that Mr. Kovrig “does not enjoy diplomatic immunity” and that China has “been completely in line with the requirements of international law, including the Vienna Convention.") This explains the Prime Minister’s recent statement of concern about Mr. Kovrig’s diplomatic status having been violated.

This concern is justified.

It is normal for diplomats to return to China later in life to do research, attend conferences or pursue business interests. Now, they must worry that some visit or conversation that was a legitimate part of their diplomatic work years earlier will make them vulnerable to the kind of retaliatory detention that appears to be China’s diplomatic weapon of choice. This may persuade diplomats, or the people who deploy them, that it is safer to do their work remotely, drastically cutting back travel and reducing their contacts with the Chinese people.

That would be a tremendous loss, because diplomacy is ultimately about trying to understand and communicate with real people. And just as it is important for foreigners to understand China, China has a huge stake in being better understood. Understanding is not agreement, but it reduces the prospect that relations will be entirely governed by suspicion, and creates space for sympathy and respect. Experienced, professional observers such as Mr. Kovrig make us aware of the enormous challenges China faces, and of many local-level innovations and reforms that are otherwise invisible to the wider world.

To be sure, diplomats in China need energy, ambition and thick skins if they are to see and understand anything. I was alternately requested, instructed and harangued by Chinese officials not to do things that were central to my job, such as visiting the family of a detained Canadian, calling on beleaguered Catholic priests or, on a visit to Tibet, meeting local people rather than spending my time in Chinese government briefings and banquets. I politely ignored such interference, but struggled to stay a step ahead of the Chinese Foreign Ministry handlers who shadowed me whenever I left Beijing.

The Kovrig case means that diplomats are joining the world inhabited by the larger community of China watchers and interpreters, a broad category that includes journalists, academics, business people and employees of non-governmental organizations.

As with these others, the first thing that diplomats will have to get right is the precise location of the ever-shifting line that separates the topics and people judged by the Chinese government to be off limits from those deemed to be acceptable. This lack of clarity is hugely advantageous to China’s security state. Ambiguity about what’s permitted causes people to self-censor, deciding not to do things that they might well get away with. And the state can always shift the line retroactively, determining that a meeting that was not problematic when it happened was, in retrospect, illegal.

Later this month, China’s Vice-President, Wang Qishan, will travel to the World Economic Forum at Davos to reassure a room full of wealthy and powerful people about China’s economic prospects. It will be a tough sell. The Vice-President and his audience will both be aware of the growing disconnect between China’s public rhetoric about openness and reform and the increasingly discouraging reality back home.

If China truly wishes to be understood, something that is important for all of us, it should do more to protect those who actually help us understand. Meeting its commitments under the Vienna Convention would be a good start.

And if China’s leaders really want to reassure foreigners, they needn’t send a delegation to Davos. Allowing Mr. Kovrig and Mr. Spavor to come home would speak volumes. 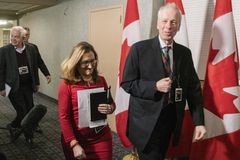