Brahma Chellaney is a geostrategist and author

Faced with a choice between a stable, firm government and a possible retreat to political drift and paralysis, voters in the world’s largest democracy have returned Narendra Modi to power with a thumping majority. This reflects the desire of Indians for a dynamic, assertive leadership to help revitalize the country so that it stops punching below its weight.

The Indian vote came after elections in most other countries in southern Asia. In the past 18 months, elections have brought pro-China communists to power in Nepal and a military-backed party to office in Pakistan, while voters have booted out a quasi-dictator in the Maldives, elected a new government in Bhutan and, in Bangladesh, retained a prime minister who has turned the country into one of Asia’s fastest-growing economies.

The only country in the region not to go to the polls recently is Sri Lanka, where the Supreme Court forced the country’s President to roll back a coup after he unconstitutionally dismissed the Prime Minister and called fresh parliamentary elections.

India’s biggest neighbour, however, is the world’s largest, strongest and longest-surviving autocracy, China – a reminder that the new Indian government’s most pressing security challenges relate to the country’s neighbourhood, not least a deepening strategic nexus between China and Pakistan. Both these nuclear-armed allies stake claims to vast swaths of Indian territory and employ asymmetric warfare.

Not surprisingly, national security weighed on the Indian voters’ minds, especially because, in the run-up to the elections, a Pakistan-based, United Nations-designated terrorist group claimed responsibility for a massacre of more than 40 paramilitary troops in Indian Kashmir. An Indian retaliatory airstrike on the group’s hideout in the Pakistani heartland helped burnish Mr. Modi’s credentials as a strong leader.

Mr. Modi’s dramatic rise in 2014 from being a provincial politician to heading the national government had much to do with the Indian electorate’s yearning for an era of decisive government after a scandal-marred, decade-long tenure of former prime minister Manmohan Singh, who was widely seen as a proxy of the Italian-born Sonia Gandhi (no relation to the apostle of non-violence, Mahatma Gandhi).

Mr. Modi’s stint in office has helped change Indian politics and diplomacy. He has animated the country’s foreign policy by often departing from conventional methods and shibboleths. And as underscored by his latest election triumph, he has helped turn his Bharatiya Janata (Indian People’s) Party, or BJP, into India’s largest political force.

The BJP has long espoused the cause of the country’s Hindu majority while claiming to represent all religious communities. It sees itself as being no different than the Christian political parties that played a key role in Western Europe’s post-Second World War recovery and economic and political integration. Mr. Modi has subtly played the Hindu nationalist card to advance his political ambitions.

If anything, the “strongman” tag that political opponents have given Mr. Modi helps to cloak his failings. For example, his “Make in India” initiative to promote domestic manufacturing has failed to seriously take off. He has also been reluctant to introduce national-security reform. India’s defence modernization has lagged, widening the yawning power gap with China.

However, to his credit, Mr. Modi has reduced political corruption and cut India’s proverbial red tape by streamlining regulations and reining in the bloated bureaucracy. For example, government permits and licences can be sought online.

To be sure, India’s economic growth has remained impressive. Its economy now is about 50 per cent larger than when Mr. Modi took office five years ago.

After overtaking France, India – the world’s fastest-growing major economy – has just edged out its former colonial master, Britain, to leap to the fifth place in the international GDP rankings. But if GDP is measured in terms of purchasing power parity, India’s economy ranks third behind the United States and China.

India is respected as the first developing economy that, from the beginning, has strived to modernize and prosper through a democratic system. Less known is that India’s British-style parliamentary democracy has fostered a fractious and fragmented polity, weighing down the country’s potential. Some 2,300 parties fielded candidates in the latest election.

The British-type parliamentary system is rife with inefficiencies, as Britain’s Brexit mess highlights. This system’s limitations appear greater in much bigger India, which is more populous and diverse than the whole of Europe. 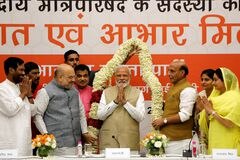 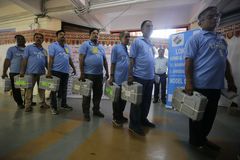 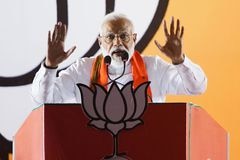