Selective amnesia can be handy. When confronted with some awkward incident, you can always claim you don’t remember. Memory loss enables you to cast doubt on whether the incident happened at all, without having to actually lie about it. It allows you to evade responsibility for circumstances you really do not want to explain.

But sometimes it’s not all that convincing.

That’s the problem with Justin Trudeau’s carefully crafted response to charges that he groped a reporter back in 2000, when he was a 28-year-old teacher attending a beer-and-music festival in Creston, B.C. Asked about it directly on Sunday, he replied, “I remember that day in Creston well ... I had a good day that day. I don’t remember any negative interactions that day at all.”

Luckily there was no follow-up question. The follow-up question might have asked about an editorial published a few days after the festival in the Creston Valley Advance, a small community newspaper. The unsigned editorial criticized Mr. Trudeau’s behaviour, citing what it called his inappropriate “handling” of a young female reporter at the festival who was on assignment for both the National Post and the Advance. It also described Mr. Trudeau’s apology. “I’m sorry,” he is alleged to have said. “If I had known you were reporting for a national paper, I never would have been so forward.”

Hands up if you suspect something happened that Mr. Trudeau would prefer not to own up to today. Hands up, if you think it’s not likely he forgot it.

According to recent reporting by the National Post and others, the reporter discussed the incident with the Advance’s editor and publisher, who both describe it as an inappropriate but brief encounter. The reporter, who apparently wrote the editorial herself, now works for a large company and doesn’t want to pursue the incident further – either for fear of retaliation, as some people conspiratorially suggest, or simply because she prefers a quiet life.

Personally, I don’t much care what Mr. Trudeau did at a beerfest back in 2000. If he did it he should just come clean, do his grovel, take his lumps and move on. But he can’t, because in his zeal to prove his feminist credentials he has insisted that the only appropriate response to any form of sexual misconduct – no matter how slight or how ancient – is zero tolerance and punishment.

It was Mr. Trudeau, you may recall, who suspended two Liberal MPs from caucus in 2014 on the basis of unproven misconduct allegations. He also banished Kent Hehr from cabinet for inappropriate comments of some kind. “The fact that we have no tolerance for this – that we will not brush things under the rug, but we will take action on it immediately – is part of the modelling that we hope to see ... throughout work forces and workplaces in Canada,” he told The Canadian Press. As for himself, he told the CBC: “I’ve been very, very careful all my life to be thoughtful, to be respectful of people’s space and people’s headspace as well.”

In other words, he found the rope and tied the noose with which to hang himself. And that’s why, if he did it, he has no choice but to insist he can’t remember any negative interactions with that woman.

The media themselves are divided about how to treat this story. Without a current complainant, some say, it has no legs. There’s also a whiff of a double standard at play. Perhaps the media would go much harder on Mr. Trudeau if he weren’t a Liberal with a generally sympathetic press corps. And perhaps the #MeToo movement would be a lot more vocal if he wasn’t one of its biggest champions.

The Liberals desperately hope this story will go away, but so far no such luck. Mr. Trudeau’s direct denial prompted stories from the BBC, The Washington Post and the Guardian, all leaving the impression that there might be something to it.

But the real story here is not the details of an alleged ancient indiscretion at a beerfest. It’s about what happens when it appears you apply a set of standards to other people that you yourself can’t meet, after declaring that you are holier than everybody else. It’s about perceived hypocrisy. And that’s a story that’s eminently worth telling. 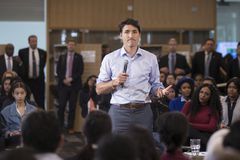