Lori Lansens’s latest novel, This Little Light, will be released on August 13

Not long ago, I received a call from the principal of my daughter’s alternative high school in Southern California where we live. There was an issue. With my 16-year-old daughter’s breasts.

It seems my daughter’s breasts had been coming to school without a bra for several weeks and apparently the two of them had just been hanging out without “support” under her sweaters and t-shirts all day long. I didn’t get a clear picture of the disruption they’d caused, but knowing them, I’m sure they were shifting around while the teacher was talking, and they always acted up in air-conditioned rooms. So what was the call about? My daughter’s breasts had made someone at school (he wouldn’t say who) uncomfortable and this person had been compelled to bring them to the principal’s attention. It wasn’t a dress-code violation exactly, but he did want to hear my thoughts. I paused before I shared.

Coincidentally, the week before this phone call, we’d received an e-mail blast from our local public high school – the school my son attended – with a warning about dress-code violations. It seems that my neighbours had been calling and e-mailing with complaints about the teen flesh parade they were forced to witness each day; bums spilling out of short-shorts, breasts popping out of sun dresses, tummies bared in crop tops, thigh gaps in sky-high mini skirts. Oh my. The principal warned that students who breached the code would be sent home. We all know that student dress code is actually code for restrictions on female attire, right? I’ve read a lot of school dress codes and never seen a mention of boys being prohibited from going commando under grey sweatpants. Not that there should be.

Decades ago, I went to Catholic school at a time when many people, even women, still bought into the binary notion of femininity. Good girls hid their sexuality. Bad girls flaunted it. In eighth grade, one of the nuns took my friend and me aside to make us aware that we were “tempting" the boys with our tiny, erect nipples, and suggested we take ourselves over to the Zellers and purchase some “well-constructed brassieres.” We were good girls, she reminded. Not bad girls. But of course, we were neither. Just humiliated. My friend and I didn’t buy new bras, but the nipple-shaming was powerful. We’d already been taught the illogic that our bodies, especially our breasts, were a severe distraction to helpless, sex-obsessed, hormone-crazed boys who could not be expected to focus at school – leading to the ultimate ruination of society – if we girls dressed less than modestly. With school dress codes that focus on female wardrobe we inculcate boys with the wrong belief that girls are in control of, and responsible for, boys’ sexual impulses. The seed of rape culture.

For my neighbours who complained about the female students, was it prudishness that brought on such a passionate reaction to some teen girls’ wardrobe choices? Do they really fear that generations of boys will be unable to graduate from high school because of all the skin on campus? Are some of the same people who put the misogynistic Donald Trump in the White House the ones making these calls? Instead, why isn’t the principal being flooded with e-mails and calls about the horrible “shooter on campus” school drills that even our youngest students must endure because of our terrible gun-control laws?

Remember Gwen Jacob from Guelph, Ont.? On a hot and humid day in the early nineties, she took her top off, bared her breasts and was charged with public indecency. Her conviction was overturned by the court of appeal based on her argument that there was a double standard for men and women as to the question of breasts being “indecent.” (Respect, Gwen. And respect to the appeals court, too.) I cheered for Gwen then, and never envisioned that, decades later, I’d still be reading stories about women being shamed for public breastfeeding. I wouldn’t have believed that teen girls of the future would be posting about being kicked out of classrooms and school dances for ridiculous, misogynist dress-code violations. I certainly never imagined that I’d get a call from school because my daughter decided to go braless. Naive me. Then again, I never dreamed – few of us did – that these past few years would see such ominous threats to hard-won human-rights issues – not just for women, but men, LGBTQ people, immigrants and refugees alike.

Back to my daughter’s breasts. I told the principal that I was aware my daughter wasn’t wearing a bra to school. Or anywhere. Bras are awkward. Bras are constraining. I thought nothing of it: her body, her choice. To his credit, my daughter’s principal really did want to hear my thoughts. He admitted to feeling uneasy about the inequality inherent in student dress codes and ultimately agreed that if a student chooses to go braless, it’s a human right. Like breastfeeding in public. If my daughter’s breasts – or anyone’s breasts – make a person uncomfortable, that person should first look away. And then look inside to ask why.

Down with dress codes! Up with breasts! I’m glad that my daughter thinks of herself and her breasts as liberated. I’m proud that she rejects judgment and has decided not to accept the responsibility of anyone’s reactions to her body. Free the damn nipple already.

Merci! French just gave us another reason to go braless 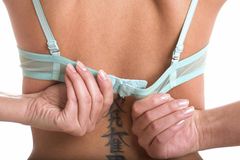 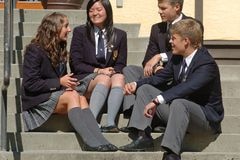 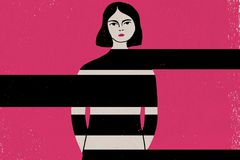