Alison Wines is a writer based in Toronto

The relationship with “home” is a complicated one for most people who no longer live in the country where they were born. Like a tree searching for water, your roots can become broad and shallow, and the deep sense of place that years in one country can provide, fades over time.

After having been away from Australia for six years, a sensation of being cut adrift swept over me when we returned with our children to Melbourne this Christmas. While we were overwhelmed with love from friends and family, I felt oddly disconnected from my city of birth. The visceral sense of belonging and nostalgia I’d experienced on previous visits was missing, and I found myself watching the shorelines of my home ebb away, without knowing with any certainty that I had another one to turn to.

I wondered at the time whether it had something to do with the climate. The heat and wind were suffocating. Never had I seen the land so dry. We travelled north to show our children the fabled Victorian “high country” where I had spent so much time as a child, and I sat agape at the car window, shocked to my core to see rolling pasture turned to dystopian dust bowls.

Let me be clear. This isn’t the first time I’ve seen drought-affected land. Australia is a dry country, heavily at the mercy of El Nino, and has been regularly affected by severe drought throughout my lifetime. I don’t think I remember a period in my adult life when Melbourne wasn’t subject to water restrictions. But this was something else. The country was two weeks into summer and the baked earth looked like a late February day. Everything was brown, dams were empty and, other than small clusters of cattle sheltering in what shade was available, the only visible animals were the dozens of dead kangaroos that lined the highway.

Landscape plays a deeply important role in the Australian psyche – the wide golden plains, the cane fields, the isolated coastlines are a resonant leitmotif in our poetry, our songs and the stories we tell our children. Perhaps the place had become so unrecognizable to me, perhaps I was so shocked and saddened by the condition of the land, that it couldn’t feel like home any longer.

I returned to Canada with a heavy heart and a deeper level of uncertainty about my future than I have felt in a long time.

And then the fires began.

They had already begun, truth be told. New South Wales had been battling drought and blazes since the early spring. But New Year’s Eve was when it really hit home – we began to hear about friends being evacuated, and others fighting impossibly huge fire-fronts for 24 hours without sleep. We saw images of the charred kangaroo carcasses pressed against farm fences and terrified horses galloping from racing flames. I sat on my kitchen floor and sobbed.

Because no matter where I call home now, no matter the complexity of my feelings about place, this was the land that raised me. This is the place that holds my most treasured memories and that gave me my sense of self.

Shock and denial have turned to clawing grief and a knotted pit of anger. I don’t know who exactly to be angry with, because the cause of these fires is so multifaceted, but fundamentally I’m angry with greed. The greed of the industrial complex that demands unsustainable farming practices that have ravaged the land and destroyed its resilience to changing weather patterns. The greed of politicians who are massaged by the insidious influence of the coal and oil industries, allowing the destruction of forests and reefs that should be not just our carbon sinks, but our greatest pride and joy. The greed of the city council that allowed a foreign company to mine the water table to create utterly pointless bottled water for city consumers, right next door to the town that is unable to fight fires because of a lack of water. The greed of the Prime Minister, who seeks to hold onto power by appealing to populists and the religious right, and so refuses to acknowledge the role of climate change in causing a national tragedy of incalculable proportions.

Feeling small and powerless in the face of this merciless taking is easy, but the time has passed to be scared into silence. What we are seeing in Australia at the current global warming increase of one degree is a horrifying prelude to what’s to come. This is also a chance for the rest of the world to stand up and say, no more.

In the end, what are countries but the arbitrary boundaries we have established around ourselves? Global warming doesn’t care whether you identify as Australian, something else, or nothing at all.

This grief and anger belong to all of us. This planet is our home, and there’s no more looking away: It is on fire. 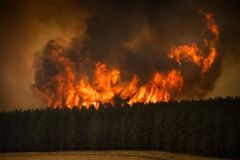 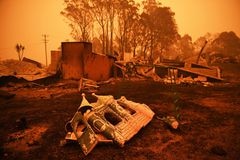 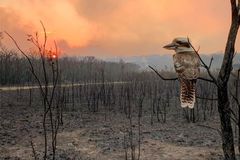