John Packer is an associate professor of law at the University of Ottawa.

Turns out the “democratization” of the Union of Myanmar was a charade at best.

Having already written its constitution to suit itself in 2008, the Tatmadaw (as the Armed Forces are known) ripped it up on Feb. 1. In a swift, telegraphed and thus-far bloodless coup, Commander-in-Chief Min Aung Hlaing declared himself “state leader,” installed a dozen cronies as ministers, and appointed a retired lieutenant-general as his puppet President. In doing so, the Tatmadaw issued a formal statement asserting that they were acting to preserve “democratic norms,” but arresting the entire civilian government, the sitting President, leading MPs and representatives of civil society sure is a funny way of showing it.

If the commitment to democratization ever existed, Myanmar’s constitution itself belies the farce. It reserved substantial roles for the Defence Services (including “safeguarding” the constitution), operated on an explicitly racist paradigm, and established unrestricted powers for the Tatmadaw during states of emergency, including unlimited suspension of all human rights. In fact, the word “democracy” appears but once in the constitution; “democratic” elements like political parties are conditioned upon requirements of being “disciplined.” And evidently, the de facto head of government sat at the pleasure of the military.

Sadly, Aung San Suu Kyi – the head of the National League for Democracy (NLD) party and the country’s ostensible government leader – has forfeited her own claim to speak for Myanmar’s highly diverse society when she declined to recognize the Rohingya, refusing even to utter their name, much less acknowledge their suffering, their mass exodus, or the atrocities they suffered at the hands of the military in recent years. Instead, the woman who had become an international icon for her human-rights advocacy (for which she’d accepted a Nobel Peace Prize) dismissed evidence of rapes as “fake news” and defended the military in the face of a damning United Nations fact-finding mission report. Now, arrested at age 75, she is likely set to be consigned to the history books as the military’s charges look to preclude her return to official politics.

But the overthrow only proves that there was never really democracy – in transition or otherwise – in Myanmar.

To cite the Universal Declaration of Human Rights (for which Burma voted in favour in 1948), the essence of democracy is that “the will of the people shall be the basis of the authority of government” demonstrated through periodic, free and fair elections, inclusive of the whole population. But in Myanmar, the military retained a quarter of all parliamentary seats as well as others that its proxy competed to win, while the NLD became a cult of personality built around Ms. Suu Kyi and was increasingly becoming a poisonous nationalist political project mobilizing the 65-per-cent majority ethnic Bamar population and alienating 20 million ethnic minorities while entirely disenfranchising the Rohingya.

More importantly, democracy in the developed, liberal sense means far more than majority rule. The tyranny of the majority has wrought enormous harm throughout the last century. Even the rule of law, absent democratic controls, can amount to little different from dictatorship. Democracies must have respect for human rights and fundamental freedoms, and Myanmar does not. As rightly noted by Bill Richardson, a veteran U.S. diplomat and a former member of an international advisory board on Myanmar’s Rakhine state, “genocide and democracy are not compatible.”

Governments around the world have long harboured illusions about democracy in Myanmar so they could build stakes in the resource-rich country. Unfortunately, this coup has not challenged those self-deceptions. The Association of Southeast Asian Nations stuck to its line of “non-interference,” while China – Myanmar’s largest trading partner and principal protector – referred to Monday’s events as a “cabinet reshuffle.” Expressions of “deep concern” from Western governments appear ridiculous in the face of what has plainly happened. For its part, the UN Security Council has said somewhat more but done nothing concrete, concluding its emergency meeting with a decision to take no action.

International civil society has been more consistent and demanding. But calls for action by the International Criminal Court ignore the fact that Myanmar is not a party to the Rome Statute and there is zero prospect of a referral from the Security Council. Moreover, a coup is not a crime under international law.

In practical terms, there are very few options for the international community. Travel bans for the generals are unlikely to have any effect, and Magnitsky sanctions may also be of limited utility given that the military has little personal investment or interest in the West. Trade sanctions and aid suspension could work, but must be done carefully (by, for example, instituting constraints on corporate dealings with the generals) to avoid hurting the general population.

The easiest and most effective route would be for the international community to finally engage robustly in the case at the International Court of Justice on the Rohingya genocide. The process can expose the character of the regime in a public “truth-telling” forum under judicial scrutiny. The Tatmadaw now has no one to hide behind in defending itself from the indefensible.

Canada is well placed to rally others to this effort. And with a sympathetic Biden administration and a Democratic U.S. Congress, a lot could be achieved quickly. It’s about time: More than three years since the Rohingya fled en masse, and with the fiction of a “democratic transition” laid bare, there is no reason for anyone to soft-pedal on Myanmar.

Hundreds of Myanmar politicians defy coup, declare themselves to be the true government
Subscriber content
February 5, 2021 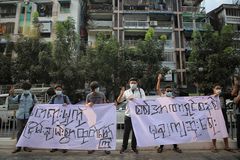 Opinion
The coup turns Myanmar’s fallen angel back into a freedom fighter
February 5, 2021 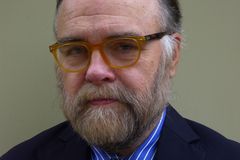 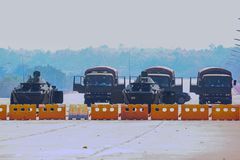