Rowena Xiaoqing He
Contributed to The Globe and Mail
Published April 19, 2019 Updated April 22, 2019

Rowena He is author of Tiananmen Exiles: Voices of the Struggle for Democracy in China. She is currently a member at the Institute for Advanced Study in Princeton, N.J. working on her next book on history, memory and nationalism in the post-Tiananmen China.

On April 15, 1989, 30 years ago this week, the sudden death of reform-minded former Chinese Communist Party (CCP) secretary-general Hu Yaobang sparked the Tiananmen Movement. Chinese citizens across the country took to the streets calling for political reforms. The peaceful movement, highlighted by college students’ hunger strike on Tiananmen Square, ended on June 4 when the Chinese government deployed more than 200,000 troops, equipped with tanks and machine guns to suppress what the regime called a “counterrevolutionary riot.”

Tiananmen remains the most sensitive and taboo subject in China. The post-Tiananmen regime has constructed a narrative portraying the Tiananmen Movement as a Western conspiracy to weaken and divide China. Massive efforts were devoted to inscribe this official account into the collective national memory. Denied the right to freely express their views, Chinese citizens resort to symbolic acts of commemorative resistance.

On April 1, four Chinese citizens were put on trial in Sichuan Province after being detained since 2016 for putting labels on bottles of baijiu – a traditional Chinese liquor – to commemorate the 27th anniversary of the Tiananmen massacre. The Chinese authorities did not intend an April Fool’s joke: They were “killing the chicken to warn the monkey,” as the Chinese saying goes. The last defendant, Chen Bing, was convicted on April 4 and sentenced to 3½ years imprisonment. Three decades after the Tiananmen massacre, the world’s most powerful authoritarian regime still feels threatened by some self-made liquor labels.

The three-year-old criminalized liquor labels depict a man in front of columns of tanks, reviving the image of the Tank Man captured in the iconic photograph of June 5, 1989. Over many years, when people learn that I am a scholar of Tiananmen, a frequent question is, “Do you know what happened to the Tank Man?” I do not know the whereabouts of the iconic Tank Man, but I do know a real-life tank man, Fang Zheng, whose legs were crushed by a tank while he was trying to push a freshman schoolmate to safety during the Tiananmen crackdown. Mr. Fang rejected the authorities’ demand that he say he was run over by a car. Consequently, he was denied his graduation certificate and bachelor’s degree. After surviving 20 years of harassment and surveillance, Mr. Fang left China in 2009 and, now resides in the San Francisco Bay Area.

Mr. Fang has been driving Uber with his artificial legs to support his family of three daughters. He remains outspoken, demanding truth and justice for the victims of the massacre. Earlier this year, when his father died in China, he and his daughters were denied Chinese visas to attend the funeral. The authorities initially issued visas, but soon cancelled them. No one would have blamed Mr. Fang if he had remained quiet after he left China. Some of the victims’ families that I know have chosen that path. Fang Zheng is a real life Tank Man; a tank man in a wheelchair. The CCP physically crushed him with a tank in 1989, but he refused to be crushed by their power.

He embodies the spirit of many ordinary Chinese citizens who have continued their struggles in the past 30 years. Chen Wei, the twin brother of Chen Bing, sentenced for their commemorative labels, was a student participant in the Tiananmen Movement and a signatory of Charter 08, a political manifesto demanding a peaceful end to one-party rule. Chen Wei is now serving nine years in prison charged with “subverting the state.” This is his third prison sentence since 1989.

Chen Bing’s defence lawyer in the liquor-label case said that parents of two Tiananmen victims, Wu Guofeng and Xiao Jie, both college students killed during the Tiananmen Massacre, had provided accounts to support Mr. Chen but the court dismissed them peremptorily. Mr. Chen had been taking care of the elderly couples as if they were his own parents. Chen Yunfei, another man from the area, who acted in the Chinese tradition like a filial son to the Wu and Xie families, was arrested after visiting the grave of Wu Guofeng in 2015. He was just released after serving four years in prison. These Chinese citizens are not known to the world like the late Liu Xiaobo, the Nobel Peace Prize laureate who died as a political prisoner in 2017, but they, too, have devoted their lives to the unfinished cause of 1989.

Unfortunately, too many politicians around the world, facing the so-called China model of governance, with its hybrid system of authoritarian control and state-led developmental capitalism, have compromised the democratic principles in a transactional exchange for wealth and power. The CCP has also been successful playing on the historical guilt of Western liberal intellectuals on China’s past at the hands of Western imperialism, presenting itself as the powerless victim that is now rectifying a historical injustice. This all becomes cover for a powerful perpetrator that is responsible for past and present atrocities, including the confinement of one million Uyghurs to virtual concentration camps in Xinjiang province.

As the liquor-label trial reached its readily foreseeable end, news came that law professor Xu Zhangrun of China’s prestigious Tsinghua University had been expelled from his academic position for expressing critical views. People often ask these days if China can lead the world. A government that put its people in prison for what they believe and what they write can never lead the world, unless we let them.

The liquor label that cost the freedom of those no-name heroes writes: “Never Forget, Never Give up.” That’s the voice of the Chinese people, who refused to be silenced, to be crushed by tanks and prisons. And that’s the spirit of the China Spring starting April 15, 1989. And, indeed, that’s the universal voice and spirit of humanity longing to be free.

Opinion
It’s time for Ottawa to rethink how it sees Asia
April 18, 2019 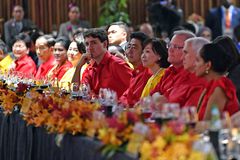 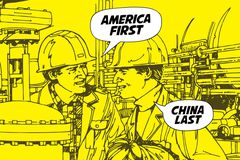